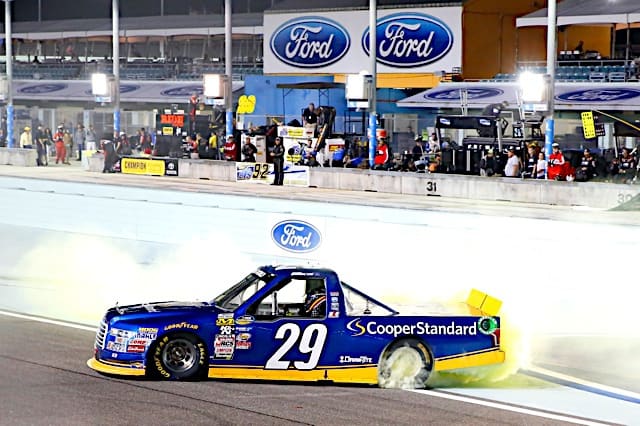 Sure, it wasn’t a NASCAR championship. But Brad Keselowski Racing’s final race in the Camping World Truck Series did include some confetti.

It came with their non-playoff driver in Chase Briscoe, who, from the pole, led 81 laps and scored the victory Friday night at Homestead-Miami Speedway. The maiden win stood as the 11th for BKR in 305 starts since 2008.

“For us to not be in the playoffs, shutting down, and to still bring trucks that can win races and poles, it’s a huge statement,” Briscoe said.

Teammate Austin Cindric entered the weekend a part of the Championship 4 after winning at Mosport in September. He started Homestead strong as the underdog, the only one to fight Christopher Bell briefly for the series title. But while he led the quartet momentarily mid-race, Cindric fell into the clutches of Matt Crafton and Johnny Sauter as Bell pulled away.

“I could never find myself committing to the top until about 10 to go,” Cindric said. “At that point, it didn’t matter because I was fourth and needed to run down [Matt] Crafton. I feel if we had a restart there and got some fresh tires on it, we would be some sort of a threat.”

Indeed, the No. 19 Ford caught Crafton late. That left him third in the championship standings, the team’s fourth top-five points finish in their history. It left BKR in strong position while closing out their final year in the sport.

“I’m over the moon for the guys on the No. 29 and BKR,” Cindric said. “To finish out that era with a win is massive. I’m excited to get third in the championship after the climb we’ve had. We scratched and clawed and fought our way up. We did the same tonight.”

“Scratching and clawing” may be precisely what Cindric will have to do this offseason, as the 19-year-old has no confirmed ride for 2018. He hopes a presence and contention in the Championship 4 will have a positive effect on that status.

“I’m racing the best in the business and I have a lot to learn,” he said. “Hopefully, this performance will help solidify some things for next year. Just to be in the final four was a huge step forward for me. It puts a lot of eyes on you in high-pressure situations — lots of team owners want to know how their driver is going to work in a high-pressure situation. Next year is still a work in progress, but Id love to still be on the NASCAR circuit.”

Scoring their final victory in their final start, Friday was a special night for the blue-and-white Ford team. For team owner Brad Keselowski, despite the unfortunate situation, Homestead was a “real test of character” to see how the team and drivers capped it off.

“These guys really stepped up,” Keselowski said. “They found a little extra to get to Victory Lane. It doesn’t go unnoticed with how much of a mental challenge that it is. That’s the biggest thing that stands out to me tonight. It’s certainly a special night, bittersweet, but it was the cards we were dealt. Everyone made the most of it and that’s all you can ask for.”

Keselowski, who continues to race full-time in the Monster Energy NASCAR Cup Series for Team Penske, has not said ‘no’ in returning to ownership in the future.

“I don’t think my days of being a team owner are over,” Keselowski said. “They’re just taking a little break until the right situation finds me. The right situation just didn’t exist for 2018. It may come back around to me some time soon. If that happens, this will be the last race we ran, so it will be tough to beat it!”