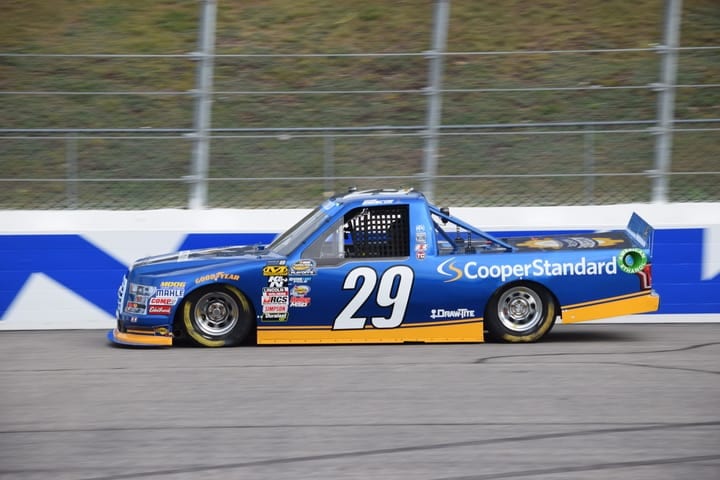 Brad Keselowski Racing proved that it’s not going to go out quietly.  Chase Briscoe claimed the pole for Friday night’s Ford EcoBoost 200 with a lap of 32.239 seconds (167.499 mph) in the final round of Camping World Truck Series qualifying.

Briscoe’s lap was three-hundredths of a second faster than Ben Rhodes, who lines up second.  Austin Cindric, who had a coming together with Rhodes last Friday in Phoenix, will start third as the best of the championship contenders.  Grant Enfinger and Noah Gragson round out the top five.

Johnny Sauter, despite being fastest in Round No. 1, turned in only the 11th fastest time in the final round.  He was three-sevenths of a second slower the second time around.  Christopher Bell failed to qualify for the final round and will start 13th.

Only 29 trucks took time during the session.  Copp Motorsports’ No. 83 for Bayley Currey and both JJCR Chevrolets for Ray Ciccarelli and Jennifer Jo Cobb failed to get on track before the five-minute clock expired.  As a result, they will line up 30th through 32nd.  Since only 32 trucks are entered, no one will fail to qualify.

Coverage of the Ford EcoBoost 200 from Homestead-Miami Speedway is scheduled to start with NCWTS Setup at 7:30 p.m. on FOX Sports 1.  Race coverage follows at 8 p.m.