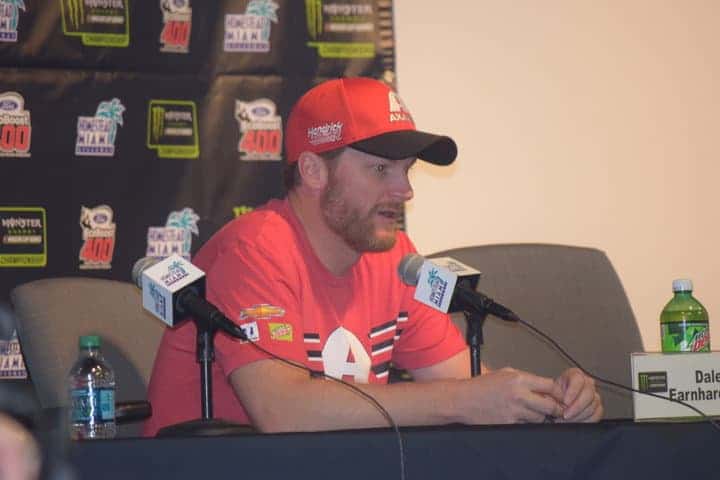 Dale Earnhardt Jr. stepped into his No. 88 machine at the start of the 2017 Daytona 500, worrying whether or not he would finish the sport’s most prestigious race.

NASCAR’s Most Popular Driver was making his comeback after missing half of the 2016 season thanks to a second diagnosed concussion in five years. The nerves set in quickly, but he survived. And that is even after a crash 106 laps into the race.

“If you’re going to drive racecars for a living, you know it’s a dangerous sport,” Earnhardt said in a Friday press conference held before his last Cup Series race. “It’s always a possibility. … I was more thankful to be able to compete this year than I ever was rather than to question if I should go farther.”

Earnhardt journeyed through NASCAR’s lengthy 38-race schedule in 2017, worrying week-in and week-out about the possibility of having a concussion once again. If that were the case, it would put a halt on his retirement campaign, which took on the slogan “#Appreci88ion.”

Fortunately for Earnhardt, he arrives at Homestead-Miami Speedway ready to compete in his final Monster Energy NASCAR Cup Series race as a full-time competitor. His achievements on the track have provided a level of credibility that makes him unique.

Earnhardt’s 26 wins over the course of 19 seasons, equating to 630 races, makes him worthy of a NASCAR Hall of Fame nomination in and of itself. But what makes Earnhardt rare is his voice.

Now, as Earnhardt puts on his helmet for the final time, the worry of a concussion is still there. But the aftermath is something he doesn’t want to even think about. Earnhardt indeed wishes he could go back and remind his mid-20s self of what could have been prevented.

“When I was in my 20s and I got a concussion, I didn’t know that,” he said, taking a brief pause. “As you age — for whatever reason — your body makes you understand it. When you have an injury in your 30s or 40s, you know your body so well to a point that it’s obvious there is an issue.”

But as Earnhardt continued, he noted someone in their mid-20s doesn’t know their body as well. When the body sends signals, it isn’t something that’s obvious.

“The only thing I can say is if you do have a sensation that something isn’t right, you need to put yourself in front of somebody that can help you,” Earnhardt said. “The biggest mistake you can make is to ignore it and push through. Those things can add up and create serious issues down the road.”

As Earnhardt gears up for his last Cup race, his message is clear to others worried they might have a head injury.

Get in front of a doctor.

“The attitude for a lot of years and even today is to try to push through it,” he said. “I think what’s got to change is people have to take it seriously and take better care of themselves for the long-term. That’s probably the mistakes that I made, and I didn’t flag those issues and say, ‘I need to get myself in front of a doctor.’ I think that’s something I can share with other people and other drivers as well to not make those mistakes.”

The move to retire is one Earnhardt never second-guessed. Before he even walked into Daytona International Speedway to start the season, the decision had been made.

It was time to call it quits.

Earnhardt is following in the path of a multitude of athletes who will be donating their brain for scientific research once they pass away. In March 2016, he announced his brain would be donated to the Concussion Legacy Foundation in partnership with Boston University.

NASCAR in February announced it would expand its concussion protocol following injuries to not only Earnhardt, but to drivers preceding his diagnosis. The protocol put in place this year requires Infield Care Center physicians to incorporate the SCAT-3 diagnostic tool in screening for head injuries, along with providing on-site neurological consultation at multiple NASCAR events throughout the season.

Earnhardt has the opportunity to make a difference unlike any other driver. With the high rate of Chronic Traumatic Encephalopathy (CTE) being diagnosed throughout contact sports, Earnhardt’s Appreci88ion Tour can make an impact on the entire sports world.

It’s an outcome that will never be forgotten.

I wish dale all the best moving forward in life. He has a baby on the way and will always be associated with the sport with JR motor sports. He has helped so many drivers that would have never gotten a good ride. I pray his brain continues to heal over the years and doesn’t develop CTE. To donate your brain after death is such an awesome thing he is going to do. It will benefit the sport in the long run as long as BZF doesn’t totally kill it by the time dale passes away. He will never have a cup title but has been a class act and I hope he makes the hall of fame with his dad for the actions and good things he has done for the sport.