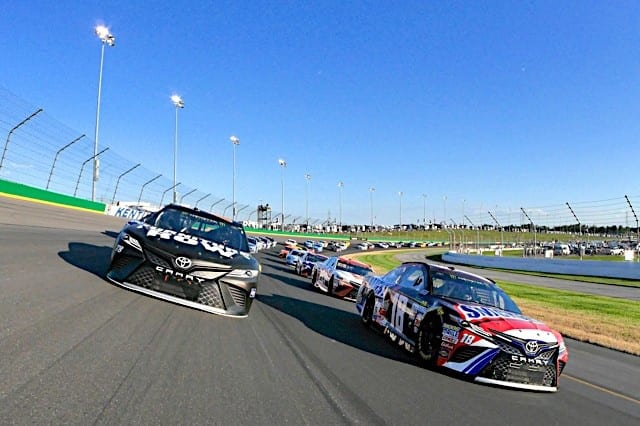 Well, folks, this is it.

There’s just one more weekend of Monster Energy NASCAR Cup Series racing, and this is the most important weekend of the season for the four drivers still in contention for the championship.

For Kyle Busch and Kevin Harvick, this marks the third time in four years they have a chance to win the title. Martin Truex Jr. is returning to the finals a year removed from his lone trip to the event. And in the case of Brad Keselowski, he’s making his first trip to the finals (though he’s won a championship before in 2012).

All have put up impressive numbers this season, but it’s worth taking a look at the stats of champions past to see who this year best fits the profile of MENCS champion. With three years of data in this playoff system to look at, these trends are young, but there are some surprising ones (and ones that fit drivers this year, too!).

Down the rabbit hole we go.

Keselowski’s inexperience in the finals shouldn’t cause fans of the Blue Deuce to lose heart. Every champion in this format has won in their first try. That doesn’t bode well for Harvick or Busch, having won the championships in 2014 and 2015. And for Truex, who made the finals in 2015, this will be just one more piece of adversity for him to overcome on his quest to win his third national series title.

One stat that bodes well for Truex? Twice has the champion won three races during the playoffs, a number at which the New Jersey native currently sits. The bad news is that the champion has also won the finale every year. Truex’s prowess at mile-and-a-half tracks this year makes him the favorite to overcome that trend and become the first champion in the elimination era to win four races en route to the title. Busch, too, could complete that feat, as he has also won three races these playoffs.

Looking at race finishes as a whole, the eventual champion has only finished outside of the top 30 once during the playoffs. All four drivers in contention fit that bill, with Harvick the only one to suffer a finish outside that mark (a 36th at New Hampshire Motor Speedway). The most harrowing stat for anyone not named Truex? The fact that he’s finished outside the top five only once during this playoff run, easily passing the four-plus top fives each champion has had during their title seasons. Busch only has three—he’s been feast or famine, winning or finishing poorly—while Harvick has five and Keselowski has four.

The worst a champion finished at Texas Motor Speedway is 11th. That isn’t great news for Keselowski, who finished 16th there two weeks back, but only twice has the champion started on the pole in a playoff race, something Harvick did twice in 2014. Keselowski hasn’t won a pole during this year’s playoffs, and neither has Harvick. Busch and Truex have two, so assuming none of them win the pole, this stat line will continue for at least another year. And none of them should want to win the pole; the best a champion has started in the finale was Busch (third) in 2015, so pay special attention to qualifying later today.

The solace that Truex can take from his two poles this playoff run? They came at Dover International Speedway and Kansas Speedway, just like Harvick’s did.

So while drivers might not want to start first, they certainly want to finish first. And those that have so far this playoff era—and by extension, won the championship—have led at least five of the nine races heading into Homestead-Miami Speedway. Harvick has only led in four playoff races this year, another point against the Stewart-Haas Racing driver. Busch has led in eight races, Truex in six and Keselowski in five. But Harvick can say that he didn’t lead a lap at Loudon, something that has happened for the champion in two of three title seasons.

What else happened in those seasons? The champion led at Chicagoland Speedway, Dover, Charlotte Motor Speedway and Phoenix International Raceway. None of our Championship 4 led last week in the desert, so that stat’s out the window. But Harvick didn’t lead at Dover and Keselowski didn’t lead at Charlotte, giving a slight advantage to Busch and Truex, who did lead at the other three tracks. Truex also didn’t lead at Martinsville Speedway (neither did Harvick), and that’s been a championship key for two of three years.

Last but not least, the champion has always had five wins, something that Busch has currently. He’ll have to not win the race but finish ahead of his competition to keep this stat alive.

When it all comes down to it, if you take a look at the trends and who best fits the mold of champion, it’s pretty clear that Truex has the historical trends and speed on his side this year. With everything the team has gone through this year—losing a team member, team owner Barney Visser having a heart attack, Sherry Pollex’s cancer)—it would be a fitting end to the season to see the team with the best overall year hoisting that championship trophy.