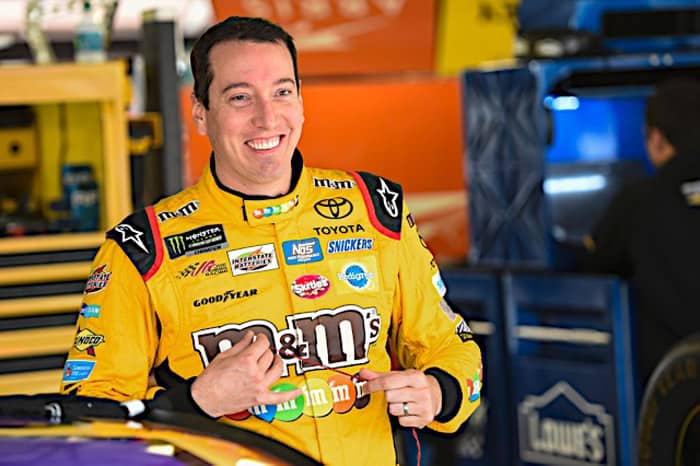 Kyle Busch enters Homestead as one of three past champions in contention for the 2017 Monster Energy NASCAR Cup Series Championship.  However, he is the only one of the three who could potentially have an asterisk next to his title.  As you likely remember, Busch missed the first 11 races of the 2015 season after breaking both legs in this savage crash in the XFINITY Series Alert Today Florida 300 at Daytona.

Once in the then-Chase, Busch advanced just like any other playoff contender would.  He qualified for the Championship 4 on those performances, then won the Ford EcoBoost 400 to win the championship.  However, since he missed those 11 races, a number of fans consider his title (even to this day) to be less than legitimate.

Busch does not agree, but doesn’t dwell on it.  Winning a second title on Sunday will permanently shut the naysayers up.

“[There’s] no question [that] a second championship validates the first one [to those people],” Busch said during Championship 4 Media Day.  “There’s a lot of arguments being made that we didn’t deserve the first one, we should never have been there for the first one.  [But], the fact of the matter is [that] we executed and did our job with the rules that were given to us.  This [championship] would…put ourselves in another elite group of guys and drivers and teams that have been really, really good over the years.”

That said, the validation would not actually be for Busch; he’s good already.  Instead, it would further cement his legacy.

“I don’t need validation, but it certainly would be worthwhile for my career and where we’ve been and what we’ve been able to accomplish in winning 40‑something races and having the opportunity to race for championships now three years in a row,” Busch continued.  “I feel like when you come out of Homestead empty‑handed the winds are out of your sails and it feels pretty bad, and you pretty much forget about it.  You forget about the year, you forget about that race, and I can remember more about 2015 and winning that year than I can about losing in 2016.”

As compared to 2015, Sunday’s Ford EcoBoost 400 will be a little different since there will be three fewer sets of tires to go around.  Busch envisions a much different race if cautions start to pile up.

“Certainly if there’s a caution you run 10 laps, [then]….there’s going to be a moment in time that you’re going to have to stay out because you just can’t continue to put tires on that fast,” Busch continued.  “Actually last year we all came and got tires, I think there was a restart with 15 to go, 16 to go, whatever it was, and all we had was a launch.  All we had was the restart and then the big crash happened in Turn 1, and we cleared it, we didn’t have any damage or anything, but there were 15 other guys on the lead lap came and put tires on again, and Joey [Logano] was one of them.  So, on the ensuing restart, Joey blew our doors off.  That kind of forced our hand into…putting tires on for ourselves and seeing if we couldn’t come back through, and nobody else came and put tires on on that one.”

If Busch can claim the Monster Energy NASCAR Cup Series Championship on Sunday, he’ll become the 15th driver to win more than one championship.  He’d also be only the second active driver to achieve the feat.