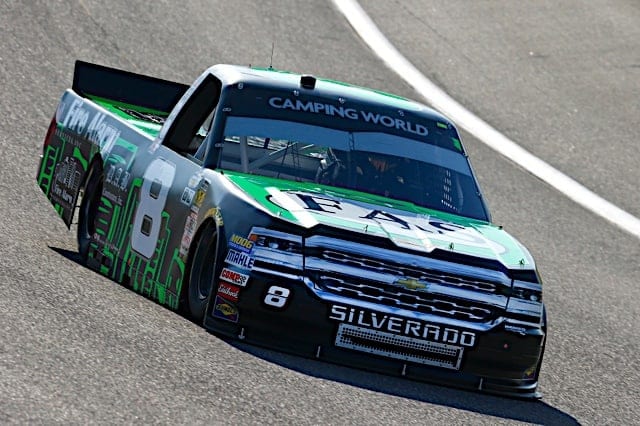 Nemechek’s lap was half a tenth of a second faster than ThorSport Racing’s Grant Enfinger.  Kaz Grala was third fastest, followed by Noah Gragson.  Christopher Bell was the fastest of the Championship 4 contenders in fifth.

Sauter and Matt Crafton spent the session tuning on their trucks and were nowhere near as quick as they were in the morning.  Crafton was 13th quickest, nearly nine-tenths of a second off of Nemechek.  Sauter was another couple of hundredths further back in 14th.

While there were no crashes during the session, one team did run into trouble.  Approximately halfway through the session, smoke poured out of the back of Austin Wayne Self‘s No. 44 AM Technical Solutions Chevrolet.  The smoke was due to a broken oil line.  Self drove the No. 44 back to the pits, where the team assessed and fixed the issue.  No damage was done to the engine.

Of the seven trucks that completed a 10-lap run during the 55-minute practice, Haley was fastest with an approximate lap time of 33.752 seconds (159.992 mph).  That time is nine-hundredths of a second faster than Chase Briscoe.

28 of the 32 trucks entered turned in laps during the session.  Snider completed the most laps with 28.  Jennifer Jo Cobb completed the fewest with one.  Ray Ciccarelli, Bayley Currey, Robby Lyons and Mike Senica sat out the session.

Qualifying for the Camping World Truck Series Ford EcoBoost 200 is scheduled for 3:30 p.m. Friday afternoon.  The session will air live on FOX Sports 1.