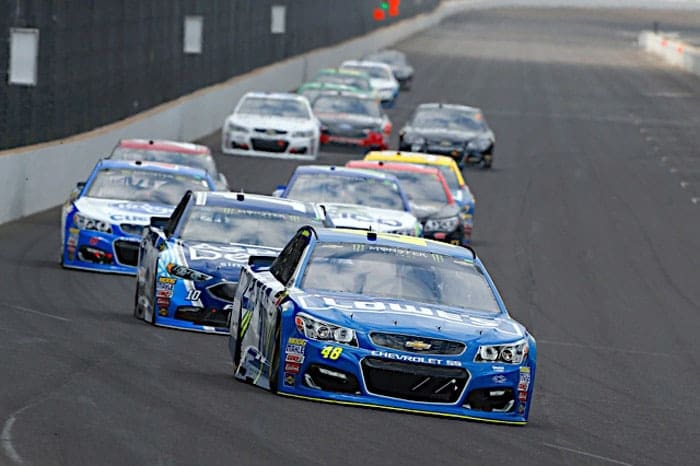 NASCAR 101 dives into quite a few statistics-based stories throughout each season, with 2017 no exception. From pole winners to series debuts, drivers from outside the United States to the oldest drivers on the circuit, there’s plenty to talk about from February to November, much of which doesn’t even leave the cutting room floor.

Instead of inundate you with yet another stat or explainer before the season-ending NASCAR races at Homestead-Miami Speedway this weekend, let’s instead check out a few of the storylines from 2017 covered in this space that could use some updating.

After all, in the world of sports writing, there’s always something to revisit. A statistic one year could be completely blown apart the next, sometimes by the same athlete or team. There are even the more forward-thinking proposals wherein one says, “Hey, this could happen,” but whether or not it actually does ends up lost in time because of time constraints, an uninteresting outcome, etc., etc.

Here are a few of the 2017 NASCAR 101 columns, specifically those that could use a second look, to see how their storylines fared as the season comes to an end.

Is An Early Week Off Good or Bad for Your Points Leader? (April 13): Remember when Kyle Larson seemed like the class of the 2017 Monster Energy NASCAR Cup Series field? Chances are Larson does; in fact, he’s probably replaying the first seven races of the year over and over in his head because it comforts him. Heading into the first off-week of the season (following the April date at Texas Motor Speedway), Larson led the point standings by 17. This article checked out previous seasons and compared who was leading after the first however-many races before the first off-week and how they were doing after that same amount of races on the other side of the break to determine if early-season success ever faltered after such a respite (the answer? It varies). In Larson’s case, he still had a strong year going, but by the close of the 14th race of 2017 (the first Pocono Raceway), he had lost the points lead, trailing Martin Truex Jr. by one. And only one driver since 2012 had won the champion after leading at the first Cup break (Kevin Harvick, 2014). In that respect, following his playoff meltdown, Larson ends up just another statistic.

The 10 Oldest Drivers on the NASCAR Circuit (April 20): This article listed the 10 oldest drivers who had attempted to qualify in at least one NASCAR national series event by April 20, with Morgan Shepherd leading the way at 75 years old (now 76 after his Oct. 12 birthday). This one changed slightly; after entering the Camping World Truck Series event at Eldora Speedway as he often does, Ken Schrader (May 29, 1955) slots in at No. 4, while Tim Cowen, born on Aug. 18, 1958, ranks at No. 7, moving Jeff Green and Michael Waltrip out of the top 10.

Cup Debuts Off to a Good (OK, Better) Start in 2017 (June 1): This point ended up being revisited a few times over the course of 2017, but in the long run, this ended up working out: Cup debuts were far more copious in 2017 than in 2016. Back then (this was entering the June race at Dover International Speedway), four drivers had made their series debut, equaling the number for the whole season in 2016. By season’s end (barring a last-minute entry list change), the number had grown to 13, the best mark this decade and the largest crop of newcomers since 2004, when 16 debuted. We’ve already got one to look forward to in 2018 for sure, with William Byron making his first Cup start in the Daytona 500.

The 10 Youngest First-Time Cup Winners (June 15): Has not changed, as Ryan Blaney was the final first-time winner in the Cup Series in 2017, barring someone rolling into Victory Lane at Homestead on Sunday.

Drivers Who’ve Won in All 3 Series (July 6): Also has not changed. Nice that this happens occasionally.

10 Longest Winless Streaks Among Full-Time Cup Drivers (July 27): The top eight remains intact (though the numbers change, of course) due to no wins for each entering Homestead. Following Matt Kenseth and Kyle Busch‘s victories, however, they’re no longer at Nos. 9 and 10, respectively. Give that, instead, to Chris Buescher (50 races) at No. 9 and defending Daytona 500 champion Kurt Busch, who hasn’t won since, at No. 10 (34).

Michael McDowell’s Series-Leading Stat in 2017 (Aug. 17): After 23 races in the 2017 Cup season, Michael McDowell held the distinction of having run the most laps of any driver, completing 6,079 through the August race at Michigan International Speedway, 53 ahead of his closest competitor, Clint Bowyer. Entering Homestead, McDowell still holds that lead, with 10,181 laps run. He could lose out at Homestead, however; second-place Paul Menard is 41 laps behind.

The 5 Drivers Most Likely to Win Their Way Into Cup Playoffs (Sept. 7): No one did! Kenseth did, of course, make the playoffs via his points position, though.

5 Drivers Who Could Take Advantage of XFINITY’s Last Standalone Race of 2017 (Sept. 22): Would you look at that? Tyler Reddick ended up winning the race. Score one for the NASCAR 101 folks. Every dog has his day, or whatever.

The Decline of NASCAR’s Team Count (Sept. 28): StarCom Racing did end up entering a Cup race (when this was published, the team had just withdrawn from Dover), becoming the 44th to do so in 2017. Barring a last-second Homestead entry, that number remains at 44.

5 Drivers Who Could Make Their Cup Debut Before the End of 2017 (Oct. 19): The number of Cup debuts — 12 at the time — ended up rising, but it wasn’t due to anyone on this list. Kyle Weatherman was the 13th. Still surprised Byron didn’t hop into the No. 25 at some point, but c’est la vie.

Race Winners Have a Better (On Average) Starting Position in 2017 (Nov. 2): Barring a major outlier at Homestead, 2017 will indeed be the best season for average starting position of race winners since 1998, when the average was 4.8. In this article (entering Texas), the average was 7.9; it’s since dropped to 7.8 with third- and seventh-place starts from Truex and Kenseth, respectively. In order to best the previous 2000s record of 8.0 in 2008, the Homestead winner would have to start from no deeper than 14th.