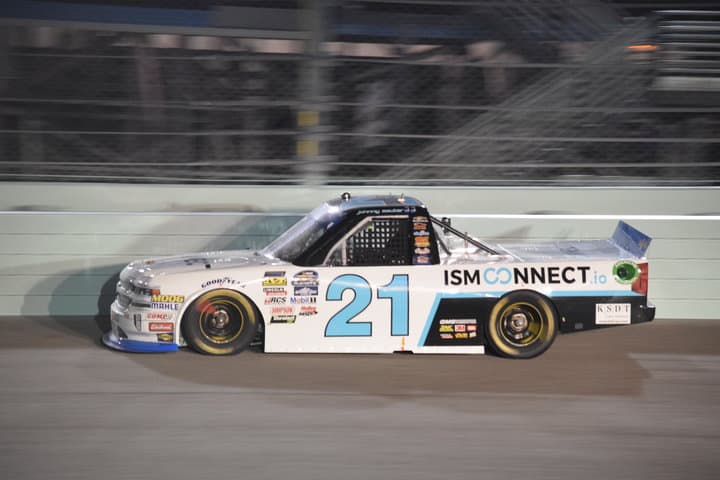 Prior to the Ford EcoBoost 200 at Homestead-Miami Speedway, Johnny Sauter had momentum. Winning the last two races heading into the championship, the No. 21 team of GMS Racing appeared poised for back-to-back titles in the NASCAR Camping World Truck Series.

But a second straight championship just wasn’t in the cards. Friday night, the No. 21 team struggled to find the grip of their race truck. Sauter was too loose to compete with 2017 Truck Series champion Christopher Bell, finishing third in the race rundown, some 13 seconds behind the No. 4 truck.

“We just didn’t have enough,” Sauter said in disappointment. “It was way too loose. Could just never get the back of the racetrack. We could crutch it up a little bit so I could run decent on the restart, just not enough. We were lacking rear side bite. Everyone keeps telling me to go to the top and I’m like ‘if you want to drive it, then go ahead and show me how to do it’ because I was way too loose to go anywhere but where I was running.”

Sauter started the championship race in 11th after being the quickest truck in the opening round of qualifying. The No. 21 worked its way up to eighth at the end of Stage 1 and finished fifth in the second stage.

With the loose condition, Sauter said he would have to drive the truck hard, but straight into the corner in order for the No. 21 to turn.

The entire 54-lap final stage then went caution free, which led to a spread out field. Sauter was able to keep up with Bell for the opening 15 laps of the run, but then fell far behind the No. 4 truck.

“You’re just hoping for a caution, honestly,” Sauter said of the final laps. “If we could come in and get tires – I had really good fire-off speed. I got to the [No.] 4 there on one restart. That was our only hope.”

That yellow flag never came, leaving Sauter one spot short of a repeat.

Despite the runner-up finish in the championship, Sauter had plenty to smile about. He earned a career-high four race victories, including three out of the final eight events. The No. 21 team had 13 top-five finishes and tied a career high in top 10s with 19. The 2016 champion also led 455 laps on the season.

“It’s obviously disappointing because you want to win the championship, but it’s a success,” Sauter said of 2017. “We won more races this year than I ever have in my career in one single season and we finished second in points. You just come so close, but the [No.] 4 has been fast all year, so I’m not surprised.”

In two seasons with GMS Racing, Sauter has seven victories in 46 events. He has finished in the top 10 in 38 of those races. On Friday morning, it was announced that the duo would return to the Truck Series in 2018 to try and claim a second championship together.