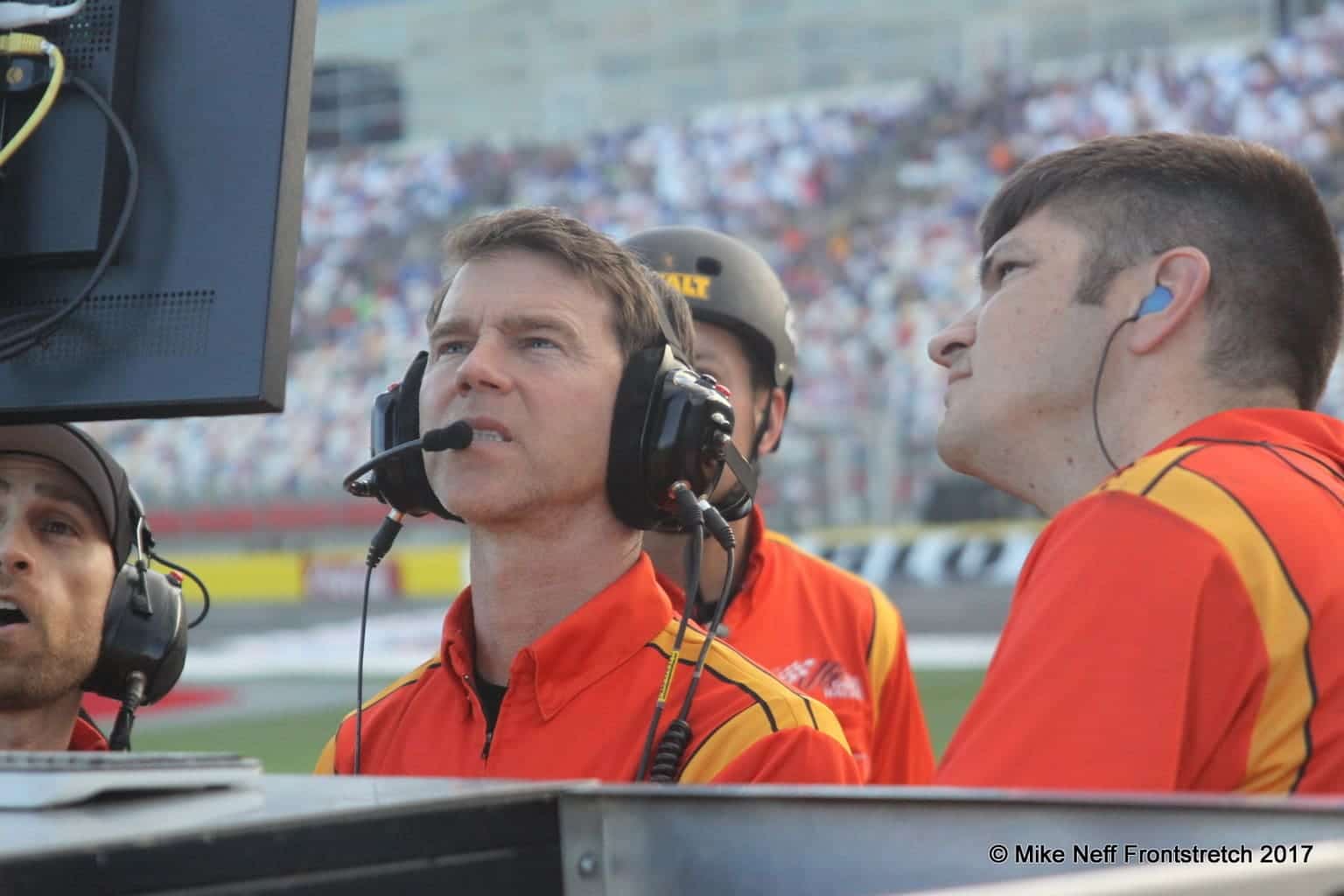 Victory always tastes sweet but it is exceptionally sweet when it arrives in the final races of a driver’s career with an organization. Jason Ratcliff guided the No. 20 team and driver Matt Kenseth to the win at Phoenix. A fast car all weekend, combined with some excellent adjustments for the long run made his car formidable enough to overtake the leader late in the race and cruise to the win.

In anticipation of Homestead, Ratcliff is reviewing his notes to figure out where the team needs to be early in the runs in order to capitalize on speed late in the runs at Homestead. In this week’s edition of Tech Talk, Ratcliff talks about optimum tire pressures, pressure splits, chassis travel and builds. He also talks about short-run adjustments and the driver track bar adjustment. He wraps up with a little talk about 2018 and the aero package for plate tracks.

Mike Neff – This is the second time this year we’ve asked someone how their race went after a win. What was it like in Phoenix the whole weekend? You looked decent, but not great, early in the race and then seemed to come to life at the end.

Jason Ratcliff – The car had decent speed all weekend. In qualifying, I thought we really had a shot at the pole. We just missed it a little bit in that final round. Even on Saturday the car really seemed to respond to changes. We didn’t change much going into the race. We felt like we ended practice where we needed to be. Once we go to the front, the car was pretty quick. Making some adjustments on it allowed us to improve our long run speed, which ultimately won the race for us, beside the fact that the pit crew just knocked one out of the park and put us in position to get it done. It was a great weekend for us and I feel like, at the end, we were the car to beat and we were able to bring home the trophy

Neff – You talk about improving and being better on long run speed. Is that mostly from a combination of the geometry and settings synching up with the tires perfectly when they achieve their optimum grip levels based on air pressures?

Ratcliff – It is a lot of things. It is air pressure, how you start it on cold tires. The shock package and travels and splitter control and a lot of things factor into it. Usually you can improve it on one end of the run but it is always a compromise. For us the car had good take-off speed when we started the race, we just needed to be faster at the end of the run. With a few air pressure tweaks and some wedge we were able to improve that and go up there and race those guys.

Neff – We are now heading to Homestead-Miami. Everyone calls it a half-mile track, which it is, but it is a true oval, not a D-shaped or quad oval. Is there anything about the fact that there is not a curved front stretch that changes how you set up your car for this weekend?

Ratcliff – Not really, Homestead is unique, obviously. It is similar to Darlington in the fact that you end the run close to the wall. The shape of the straights don’t really factor in. It is more about how you enter the corner and being good on the long run. Not burning the tires off of it is crucial so that is what we’ll focus on all weekend.

Neff – We’ve had a lot of races this year where tires are coming into play, and that is a good thing. What is it about your setup that you adjust to try and help make tires last or is that basically in the hands of the driver?

Ratcliff – We’re always trying to find optimum air pressures, or at least end in the optimum range. Homestead is your shock package and getting your tire splits set right so the balance doesn’t migrate too far. A lot of times you have to take off with a balance you aren’t completely happy with so that you can end with one that you are happy with. We’ll tweak on that. We have some notes that tell us that ‘this is where we need to be at lap five so we’re good at lap 40.’ We’ll focus on that and deal with it throughout the weekend.

Neff – We’ve been talking about optimum air pressures, and it changes with every track. Just to give fans an idea, when you start off a run at an intermediate track versus what those optimum air pressures are, is it a build of 20 pounds or 40 pounds? What kind of pressure change do you experience from beginning of the run to the optimum performance air pressure?

Ratcliff – It depends on the track and ambient temperature and things like that. It is not uncommon to see around 20 pounds on the right front, give or take. A lot of times you can’t exactly hit the target you want to hit. It is a trade-off. If you try to get too much goody out of that you may beat yourself too badly on the front side so that it doesn’t matter by the time you get there. You’re trying to aim for those targets the best you can. A lot of times it isn’t the hot pressure as much as it is what those right side tires are doing. Is the right front building over the right rear? Is the right rear building under the right front? You’re looking for those splits where it is drivable at the end of the run. A lot of factors play into it.

Neff – There was some discussion out of Phoenix about how the No. 24 team was able to make their car really fast on the short run and that is partly why you were able to run him down at the end. When you’re faced with a short run or know you’re going to make a short run at the end of race, do you have a set of tires that you already have aired up to a higher pressure to start off with, knowing you may need to throw them on for a quick sprint, or is that a call that you make when the caution flies with 10 or 15 to go, to have your tire guy air them up?

Ratcliff – A lot of times we’ll watch the laps wind down and we’ll start to game plan for that. We have a game plan if we’re going to put four tires on or just rights. What do we need to do for adjustments? Sometimes it comes down to more than just air pressures. There might be a wedge adjustment. A lot of times you can air them up too much. I’ve been in situations where it felt like I needed to put air in them and all I ended up doing was hurting the grip, not helping our speed in the short run. A lot of things play into it again. I think balance is key, moreso than just adding or taking air out. It is ultimately finding that balance you need at a particular spot within the run, whether it is in the first five laps or the last 20.

Neff – You talk about balance. A lot of people don’t realize, or think about the fact, that when you burn off fuel you are literally taking 120-130 pounds off of the rear of the car. Is there enough adjustability in the driver track bar adjustment to account for that change in weight or is that something that the driver needs to deal with at the beginning of the run to make sure the car is right at the end?

Ratcliff – Usually they just have to deal with it. They have that track bar adjuster but a lot of times it doesn’t really help you where you need it. It does a lot of other things besides just tightening or freeing up the car. It changes the way the car rolls. It can affect your platform. It does some other things that are not really advantageous. It is definitely a tool they can use though. We find a starting spot for it and leave it there. Throughout the run, if he wants to use that to help his balance then that is just another tool he has.

Neff – Along those lines, if he does choose to use it during the run, when he comes into the pits do you have him reset to your default setting so that you know you’ll be starting from where you left off with your last adjustments?

Ratcliff – Yep, we always start in the same spot.

Neff – There is character building back into Homestead. As a result are we getting more chassis travel this week than we did the last couple of weeks at Texas and Phoenix?

Ratcliff – No, not really. The speeds throughout the race you’ll have times when tires are new and you’ll have good speed and be running the top so you’ll have a lot of vertical loading. As far as travels go, we typically find a target for those that will allow us to optimize our aero platform and we shoot for those every week.

Neff – We’re getting ready to hit the offseason and head to 2018. The speedway aero package is going away and the package that we run at Daytona and Talladega is going to be the same as we run everywhere else. Have y’all delved into that much or is that going to be a project once you’re through Thanksgiving?

Ratcliff – We’ve talked about it and considered some options. I don’t know that they have it fully nailed down yet as to how it is going to work. I think, for the most part they do, but it is a huge change for speedways and something that we’ll need to dig into pretty hard once we get through Homestead.