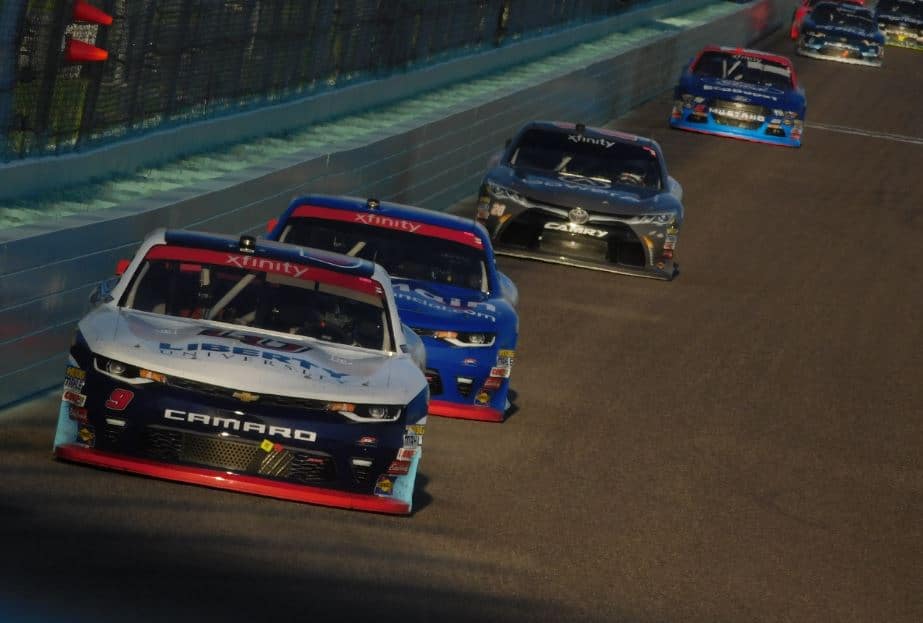 The NASCAR XFINITY Series championship came down to an epic battle between teammates. In the end, the youngster edged out the veteran as William Byron won the series title at age 19.

“This is an incredible feeling,” Byron said. “I’m just very thankful for everyone who made it happen.”

But it all happened behind Cole Custer, who scored victory by more than 15 seconds Saturday night at Homestead-Miami Speedway.

“I can’t say enough about this group,” Custer said. “There’s no better team I’ve raced with before. We really wanted to have a good showing during Ford Championship Weekend. This is just unbelievable. To see how far we have come is just incredible.”

The win, his first of his XFINITY career, came after leading 182 of 200 laps. The victory for Custer was never really in doubt during a clean race that went caution free over the final 104 laps.

Over the race’s second half, Byron and Elliott Sadler found themselves stuck together. The duo were battling for fourth place but, more importantly, the championship lead. As they traded position and paint in the final 50 laps, both men wound up hitting the wall at one point.

But in the end, the battle tilted towards Byron when both drivers attempted to pass Ryan Preece for third. Bryon cleared Preece while Sadler could not.

“Just very devastating today,” Sadler said. “Tonight is the closest I’ve ever come to a championship. Leading the No. 9, the race is in my hands to win it. I dove down into Turn 1, I thought [Preece] would give it to me and he gased it and pinched me down. I’ve been racing a long time, I would say tonight is the most devastating and down-and-out Ive ever felt in my career.”

In the end, that meant the teenager held on for his first championship as a rookie for JR Motorsports.

Sadler came up short again in his elusive championship effort in the series, finishing eighth after falling back late. Even tougher to take, Sadler finished second in the championship for the fourth time in the last six years.

Justin Allgaier dropped off the pace from the top two, ending the night in the 12th spot, one lap down.

Daniel Hemric entered Homestead as the only non-JRM title contender and left crushed, as a battery issue took the No. 21 Richard Childress Racing Chevrolet out of contention. Hemric finished 34th, 13 laps down.

Kind of ironic that the veteran Sadler made a couple of rookie mistakes in the late going and then has to fall back on the entitlement mentality after the race. No wonder he has driven for about ten teams since he went down to the minors after not cutting it in Cup. Seriously is this guy going to be 60 and still trying to win a minor league title?

Sadler should pay more attention to who he is racing around! His first comment was that the 18 was a lap down car – and then went on to say the 18 wasn’t racing anybody! Preece was the 3rd place car at the time, and was racing the 22 for the owner’s championship.