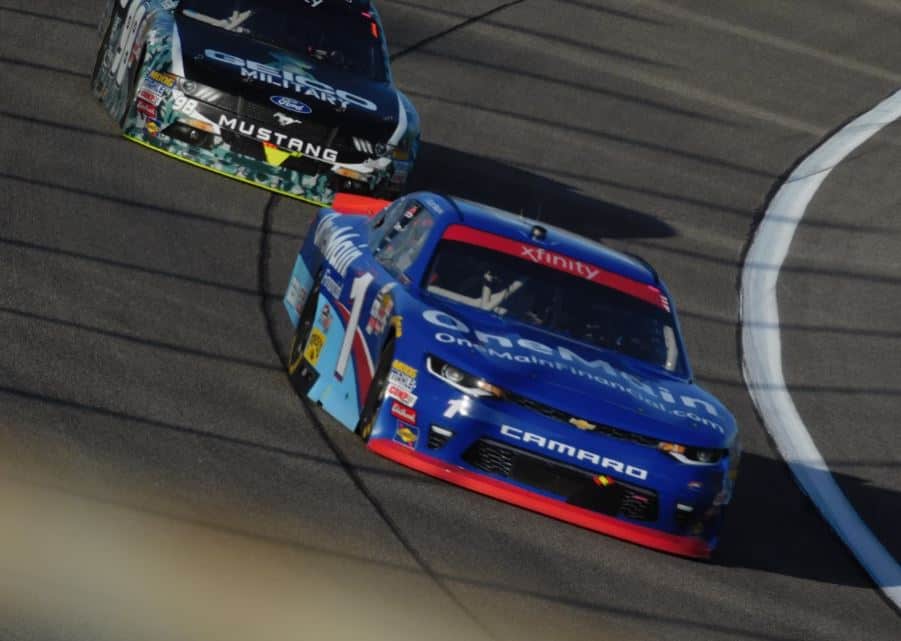 As soon as Elliott Sadler parked his car on pit road, a shouting match began between himself and Ryan Preece. The fury in Sadler’s eyes said it all as he didn’t even second-guess his actions.

“Who is he racing?” Sadler angrily asked. “He just gave me a lack of respect.”

And so it went as another NASCAR XFINITY Series championship slipped just outside of Sadler’s grasp.

As the laps wound down, the JR Motorsports driver found himself in position for a title. Holding a half-second edge over teammate William Byron, he pushed ahead by a half-second after Byron’s No. 9 nudged the wall off turn 4.

But then, Sadler came upon Preece. The duo began battling hard for third position with just over 10 laps to go. After several attempts, Sadler tried but couldn’t pass the 2013 NASCAR Whelen Modified Tour champion on the low line.

Instead, rookie William Byron drove beneath Sadler, cruising to the championship over the final handful of laps.

As Sadler attempted to make one last charge at his JR Motorsports counterpart, he made contact with Preece, nearly wrecking as the two got sideways in the midst of the corner.

“I didn’t know it was going to come down to a guy who isn’t racing for anything and holding us down,” Sadler said. “With 10 laps left, he’s not racing a soul. It’s just the way it ended up.”

When the pit road argument ended after a couple of tense seconds, Sadler stared at the ground for a few moments. As the 42-year-old tried to collect himself, he simply didn’t know how to react.

But, even after calming down the driver firmly placed blame on Preece. While the No. 18 team was up for the owner’s championship, Sam Hornish Jr. was nearly a half-lap ahead in the Team Penske machine that claimed the title.

Given a chance to tell his side, Preece felt otherwise.

“What else could you do?” he asked. “I’m just doing what I’m doing for Joe [Gibbs, team owner]. They told me to race for the owner’s championship. We were trying to race the No. 9. When he got behind me, I was going to let those two race for it. There isn’t much more to it than that.”

Even with Preece’s explanation, saying it was “team orders,” Sadler was in disbelief over what he called the “biggest disappointment of my career.”

Sadler is now a XFINITY Series runner-up for the fourth time since returning to the division full-time in 2011.

“This is very disappointing,” Sadler said. “To be that close and not win a championship is frustrating. I don’t have many years left and I wanted to try to fulfill a childhood dream.”

The Virginia driver had battled with a loose racecar throughout the night. But he continuously fought Byron for a spot in the top five, the ultimate decider in the championship battle.

With about 25 laps to go, Sadler finally got around his rookie teammate. But Byron, after slapping the wall multiple times, methodically worked his way back into Sadler’s vicinity. When the No. 9 car had the chance, he used Preece as a pick.

Preece went on to say how he has the utmost respect for him, going as far as saying, “The last person you want to get into is Elliott Sadler.”

But the reality is Sadler’s dream of winning a championship will be put on hold for yet another year. His 2017 season concludes with 12 top fives and 25 top 10s, failing to earn a victory for the second time in three seasons.

Said Sadler, “It just got taken away from us there. I just don’t get it. I don’t understand it.”

As much as I wanted to see Elliott Sadler win this championship, he showed no class in losing it. Blaming Ryan Preese for him losing the championship is so ridiculous. Ryan was racing for his future career. You got beat by a kid for the championship and are looking for excuses. You’re a better than average driver who can’t close the deal. The type of driver Junior Johnson would never keep. The championship went to the deserving driver. Who wants a champion that never won a race and finishes fourth to win a championship. This series show how weak the drivers are. They can’t even beat drivers with very limited starts for the year. Congrats to Cole Custer for his domination of the race.

And this poor kid in the 18 car has to basically apologize for doing his job.
One can only hope that someone outside the inner circle races one of the Final Four hard today. If so, it will be the first time in four years of this farce.

He has driven for Jack,RCR, Gibbs and now Earnhart and still can’t win a championship, but its always somebody else who is at fault.

I, too, was rooting for Sadler to win, right up until he decided the was entitled to the win without earning it. He knows how to make a pass without punting someone in the top 5. If he can’t do it, he doesn’t deserve it.
He lost my respect, not that he cares. By the last lap my entire household was rooting for Sadler to blow a tire and cheering for the young guns! It ended the way it should have.

20 years for Sadler racing cup and only 3 cup wins. He should have edited long ago. Now 7 full years in xfinity driving full time against kids and he couldn’t get even one win in top equipment. What a whiner he is, always has been. The kids keep beating him. Good thing Sadler has one main supporting him. Jr didn’t seem too pleased with Sadler attitude or actions.