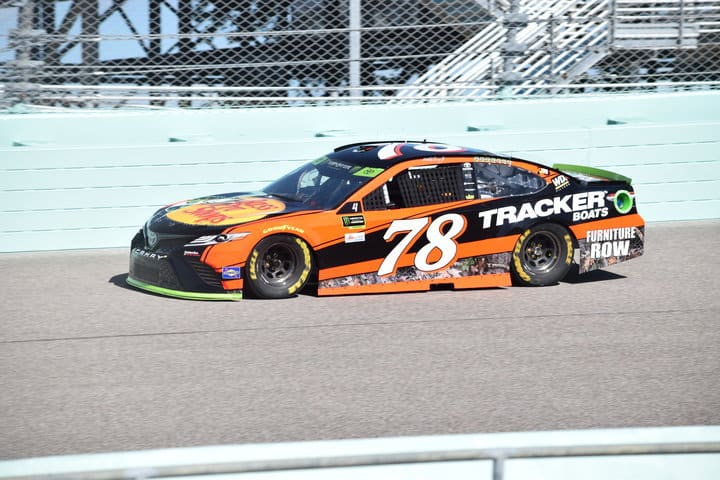 If there has been a constant at Homestead-Miami Speedway so far in the Monster Energy NASCAR Cup Series, it has been Martin Truex Jr.‘s pace right out of the box on fresh tires.  Happy Hour was more of the same.

On his very first lap of practice, Truex turned in a time of 31.543 seconds (171.195 mph).  That held up to be the quickest lap of the whole session.  It was also the only one of the entire practice that averaged over 170 mph.

Truex’s lap was more than a quarter of a second faster than Clint Bowyer in second.  Denny Hamlin was third quickest, just 0.003 seconds slower than Bowyer.  Erik Jones and Ryan Blaney were fourth and fifth.

Kyle Busch was the second fastest championship contender in sixth, followed by Dale Earnhardt Jr.  Matt Kenseth was eighth, while Kurt Busch and Daniel Suárez rounded out the top 10.

Outside of the top 10 were championship contenders Brad Keselowski and Kevin Harvick.  Keselowski was 11th quickest and seemed to be fairly solid in the session.  Meanwhile, Harvick had to serve a 15-minute hold at the start due to flunking pre-race inspection twice in Phoenix.  Once he got on track, Harvick struggled to the 18th-fastest time.  However, he was the fastest driver in the session that was actually able to pick up speed after changes in the garage.

All 39 drivers entered recorded times during this practice.  Kyle Busch ran the most laps with 54.  Ray Black Jr., who was at the bottom of the chart, ran only four laps in the session.

31 of the 39 drivers completed 10-lap runs in Happy Hour.  Of those drivers, Kyle Busch was fastest with an average lap time of approximately 32.790 seconds (164.682 mph).  That time is roughly four-hundredths of a second faster than Truex.  Hamlin had the third fastest average.

Coverage of the season finale from Homestead-Miami Speedway Sunday starts with NASCAR America Sunday at 1:30 p.m. on NBC.  The green flag is scheduled to fall a little after 3 p.m.

Ford needs to sweep the weekend.

Top 4 qualifiers are Toys. Ford won’t break into that crowd.