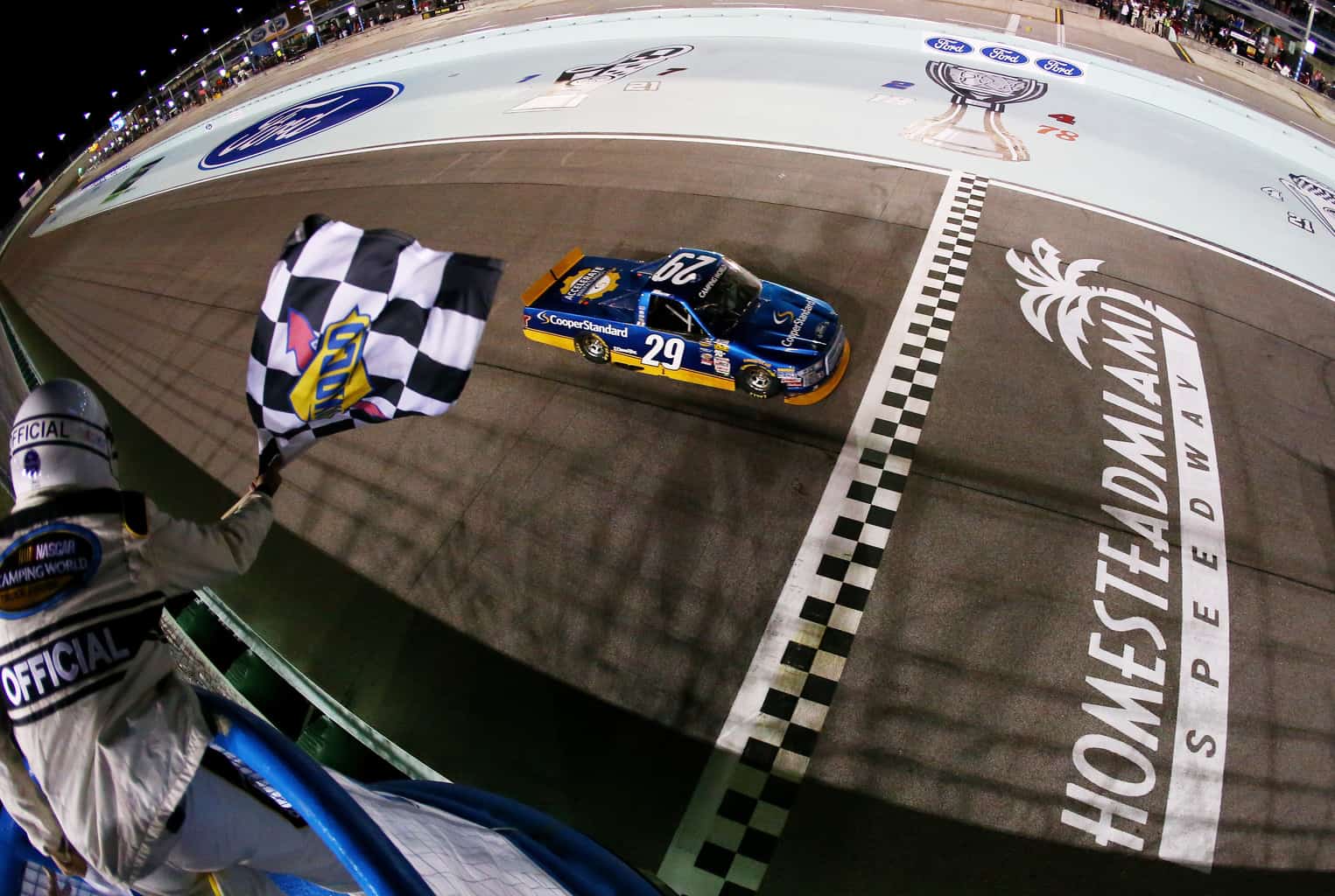 In a Nutshell: Chase Briscoe put on a clinic at Homestead-Miami Speedway as he took the checkered flag ahead of Christopher Bell to score his first career win. Starting on the pole, the driver of the No. 29 Ford led a race-high 81 of 134 laps en route to Victory Lane. Johnny Sauter, Ryan Truex, who recovered from a pit road penalty under the second caution, and Briscoe’s teammate Austin Cindric rounded out the top-five finishers.

Who Should Have Won: Simply put, Briscoe was the driver to beat Friday night. He started on the pole and held the lead for the first 33 laps before Bell took the top spot for 10 circuits. For a hot second, it looked like Bell would win the race and the championship all at once.

But the driver of the No. 29 Ford re-assumed the lead three more times for another 48 laps, including the final 39 en route to a final win for Brad Keselowski Racing. It was a dominating win for Cindric and a great moment for BKR, which will shutter its doors now that the 2017 season is over.

After what many would describe as a dream season, it was Bell who emerged victorious, even though he didn’t win the race at Homestead-Miami Speedway Friday night. Instead, Bell leaves the 2017 season as Camping World Truck Series champion.

“There are no words to describe what this means to me,” Bell said. “To be able to be here and to finish out my career at Kyle Busch Motorsports with the championship is something that I’m going to cherish for the rest of my life. Man, to be able to do it with JBL on the truck – they’ve been with me since day one and the start of my career and were with me through last year. We had a struggle point there through the beginning and middle parts of last year and they stuck with me, believed in me, and we were able to preserve and come away a champion a year later.”

In a season that saw him finish no worse than fourth on mile-and-a-half tracks, Bell was heavily favored to win the title. All told, the driver of the No. 4 Toyota ended the year with five wins, 15 top fives, and 21 top 10s. In fact, the only two races he didn’t end inside the top 10 were a crash at Dover and an engine failure at Canadian Tire Motorsports Park.

“Christopher (Bell) obviously has incredible talent, but he had a steep learning curve when he got to the Truck Series,” Toyota Racing Development USA president David Wilson said. “It has been fun watching him learn, grow and develop over two seasons into a NASCAR champion. I think some of NASCAR’s best racing is in the Truck Series and to be a champion in that series at 22 years old really speaks to the potential Christopher has demonstrated.

“We can’t wait for Christopher’s next chapter. We’re so lucky at Toyota and TRD to have great team partners and drivers that help us succeed, so I just have to say congratulations and thanks to Christopher, Kyle and Samantha Busch, as well as their whole Kyle Busch Motorsports organization for helping Toyota win races and championships.”

Bell will not return to the Truck Series next season. Instead, he’ll move up to run for Joe Gibbs Racing full-time in the XFINITY Series.

When the checkered flag flew over Homestead-Miami Speedway Friday night, it also fell over Brad Keselowski Racing’s tenure in the Camping World Truck Series. Yet another victim of the cost of racing in the sport, BKR announced earlier this year that it would end operations at the conclusion of the 2017 season.

But despite the seemingly bad news, the organization ended its venture in competition on top. Rookie Chase Briscoe scored his first career win to close out the year with a bang.

“This is a long time coming. So proud of all these guys,” Briscoe said in Victory Lane. “To know that they’re not going to have a job next year and we continued to bring really good trucks even though we were outside the playoffs, such a testament to how good these Brad Keselowski guys are. Thank you so much to Ford for believing in me. This year, for those guys to continue to believe in me makes me feel blessed to be here.

“I know two years ago I was sleeping on couches and now, to be a winner in NASCAR. I wish we were in the final four, I felt like we could have been but that’s part of the circumstances. Have to thank Brad and Ford and the Cunninghams. It’s been a long time coming. I can’t thank them enough.”

Despite the trip to Victory Lane, though, the storybook ending didn’t quite happen for BKR. Its lone shot at the championship ended the race fifth, good enough for third in the title race.

“We didn’t have the best long-run speed. I knew that going into the final restart,” Cindric said. “I drove my guts out to try and get by the No. 4 (Bell) and couldn’t quite seal the deal and had to start trying some things. Tried the top there and was able to get around Crafton on the last lap with a slide job for third in the championship.

“I’m over the moon for the guys at BKR. To get Chase a win after so many seconds he’s had this year, it’s a dream way to finish it out. Obviously, we wanted the championship, but we’ve come a long way in not a long time. I’m proud of the effort, proud of how far we’ve come, and I’m looking forward to the future.

“I love these guys. I hope we get to work with some of them moving forward and I’m blessed to be where I am.”

With BKR’s closure, Briscoe’s future is up in the air at this point. Ford Performance would like to get him into the XFINITY Series next season but nothing has been confirmed.

“Chase being our development driver, for him to get his first win is fantastic,” Ford Performance global director Dave Pericak said. “To get a win in Miami is even more special because this is where champions are born and championships are made.

“What a way for BKR racing to go out. It’s unfortunate that the truck team is going, but we have a lot planned for Chase in the future. This is just the start of a great thing.”

Clearly, Briscoe’s future in the sport seems to be intact. You can bet a victory to close out this season should turn some heads and help him solidify 2018 plans.

“Yeah, this Homestead (Miami Speedway) race was just the story of our season – everything we can do, we do right,” Rhodes said. “Just stuff outside of our control goes wrong. Had we not run out of gas and had we not got dumped by (Austin) Cindric the week before, we’d be champions right now. That’s a very bittersweet thing to look at. But it just shows that everything we can do right, we’re doing right. Unfortunately, we ran out of gas – you know, that’s a little bit on me, a little bit on our pit stop stopping short because the No. 29 (Chase Briscoe) came in in front of us and took longer to get gas in it. I left just a split second too early and that could have been it right there.”

“We just didn’t have enough,” Sauter said. “It was way too loose. Could just never get the back of the racetrack. We could crutch it up a little bit so I could run decent on the restart, just not enough. We were lacking rear side bite. Everyone keeps telling me to go to the top and I’m like ‘if you want to drive it, then go ahead and show me how to do it’ because I was way too loose to go anywhere but where I was running.”

“I am beyond excited about the opportunity to drive for JGL Racing next year full-time in the NASCAR XFINITY Series,” Grala said in a team release. “I’ve been watching XFINITY races since I was a little kid, so to be able to compete at that high of a level is nothing short of a dream come true. I can’t thank James Whitener (owner of JGL Racing) and everyone at JGL enough for this opportunity. Bring on Daytona!”

Up Next: The Camping World Truck Series will distribute its season awards in a combined ceremony with the XFINITY Series. This year, the banquet relocated from Miami to Charlotte, where most of the teams are based.