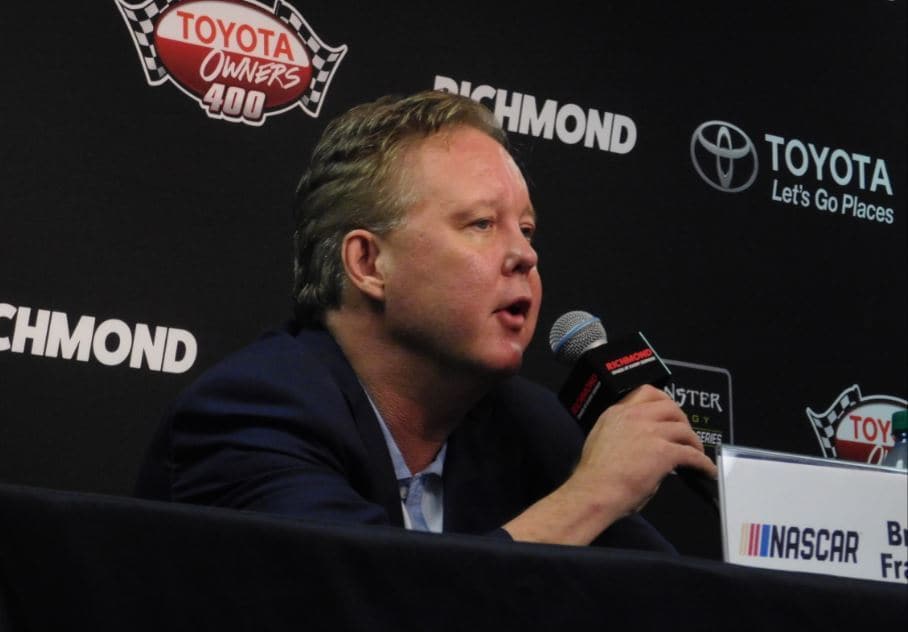 Sunday morning, NASCAR CEO Brian France and president Brent Dewar addressed the media at Homestead-Miami Speedway.  Last year’s press conference was a contentious one for a number of different reasons.  This time, it was a more subdued environment as the two executives gave wrap-up comments on the 2017 season.

France started out the conference by noting that 2017 has been “a great year, not a good year, a great year” for NASCAR.  France emphasized the close competition, including the playoffs.

Meanwhile, Dewar acted as something of a voice of reason.  While France can be somewhat emotional at times, Dewar’s responses to questions were quite nuanced and research-based.

For Dewar, the current reality of NASCAR is in flux.

“It’s a work in progress,” Dewar said during the press conference.  “We’ve got a very involved industry.  We’re trying to put a process in place to get the best possible inputs [on how to improve the sport].  That allows us to make the best decisions.  We started with the manufacturers (OEMs), then we went to the team owners and drivers, and then we come together collaboratively, to bring all those things together, and you see some of that hard work.”

2017 has been the first year for Monster Energy as the entitlement sponsor of the Monster Energy NASCAR Cup Series.  So far, both Dewar and France are happy with what they’ve seen.

“We’ve been really pleased with how Monster has come in and engaged with our fans, and the show out here this weekend will demonstrate that,” France noted.  “In all markets, it’s been fantastic.  Their young, edgy demo, they’re motorsports centric and they always have been in their culture.  We’re really pleased.  I’ve been out to their headquarters three different times to work with them because this is also a complicated sport to make sure that they’re getting all the value, but they’re getting a lot of value, and we’re very pleased with where that relationship is.”

One of the bigger news stories in recent years has been the exodus of star drivers from the Monster Energy NASCAR Cup Series.  2015 saw Jeff Gordon end his full-time driving career while 2016 saw Tony Stewart hang it up.  Sunday’s race will see Dale Earnhardt Jr. drive in his final event while Matt Kenseth is ready to hang it up, too.  Meanwhile, Danica Patrick will not race full-time after Sunday and will retire for good after the Indianapolis 500 in May.

France doesn’t appear to be too concerned about the exodus.  He views it as a natural change.

“It’s true, we’re in a transition,” France stated.  “But, that happens from time to time.  Not usually in the concentrated manner that we have now, but it happens.

“I would say the same thing,” Dewar said.  “We anticipate every decade [that] you’re going to go through this rotation.  Between NASCAR Next and Drive for Diversity, these young stars that you’re talking about have all come through those classes, and they’re all good wheel men and women that are coming up through these series, and I think that’s the key thing.  We’re working with them in terms of how they work outside the car.”

In regards to TV ratings and attendance, ratings have been down at the majority of races in 2017.  However, France countered a question about the decreases.

“Well, that isn’t quite accurate on the ratings and attendance because attendance is up at… 20 something events,” France said.  “[Race] consumption is changing for everybody, so [the TV ratings are] not accurate, either.”

Dewar explained that the entitlement agreement was tailored to Monster Energy’s strategy as opposed to NASCAR’s.

“We’re excited with the deliverable on all sides, but we opted for the shorter term because we wanted to be congruent to what their marketing strategy is,” Dewar stated.  “The deliverables on all sides were in market.  We brought in 12 new Official Partners this year, and the sport is appealing.  When you talk about 80 million fans and high engagement levels, we actually say, if you haven’t been around NASCAR the last four or five years, you’ve got to get to know us.”

The overall theme of the press conference was positive.  Dewar and France believe that NASCAR is making the changes that have been deemed necessary in order for the sport to thrive.

Let me be the first to call bullshit.

When you don’t release attendance numbers anymore, I guess you can make up some story about it being up at 20 something races. If it is up anywhere, credit the retirement of this generation’s most popular driver.

Oh, and of course the ratings aren’t accurate. NASCAR must be the only form of entertainment that people watch online.

I think it’s hilarious that a lot of people are saying Truex “deserves” the title this year. I guess that means Kenseth “deserves” the 2003 championship based on his POINTS advantage over the whole season. How did that turn out? I can’t wait for Brian’s ideas for next season. Maybe I can.

Let me be the second. I watched the pre race show for a few minutes then turned it off and went back to my book and iPad. I’m fervently hoping that Jr wins the race and all four of the contenders DNF. What is the plan if hypothetically all four “playoff contenders” finish say 27th, 30th, 34th and 38th? Does that mean the “Champion “won by finishing 27th in the “Championship Race? “ or do they go back to points, number of wins, etc? Maybe Brian uses a Ouiji board to crown a champion? LOL! What a farce!

Tom B
Reply to  Don in Connecticut

You could lead every lap of every race and get passed coming to the checker flag at Homestead and lose the championship. I know it will never happen, but who thought Kyle Busch would be the champion after Daytona.

I must state that for once I emphatically agree with Brian France. It has been a great year free of NASCAR fandom. I watched only the Eldora event and occasionally read about the rest, and the season went better for me than it had in a decade.

As it has been virtually every week this season I spend more time reading the comments on Frontstretch and some of the Jayski contributors than I do wtching the “race”. More entertaining by far.

When you use words like congruent and deliverables, it just shows how out of touch you are with the fan base.

And in what universe did Chase Elliott, Ryan Blaney, and Kyle Larson come through the Drive For Diversity? That whole concept is PR garbage to make the sport look diverse and nothing more. It doesn’t matter if you are black, white, pink, green, male, female, it takes money more than talent to get a ride.

It amazes me how much this can talk so much and say so little. It appears he now has a puppet to do it for him so he can be at the track even less than he is now. Until he is gone, Nascar will never get better. This is how I feel about the sport now.