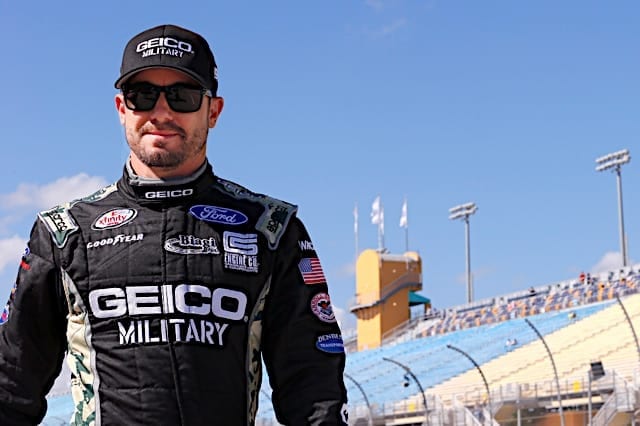 Saturday night’s Ford EcoBoost 300 at Homestead-Miami Speedway could have been the last for Casey Mears.

With the 2017 NASCAR XFINITY Series season coming to an end, the 39-year-old has no plans to race for team owner Fred Biagi in 2018 as the No. 98 Ford partners with Stewart-Haas Racing for the year to come.

“Right now, I don’t have anything going with them for the following year,” Mears told Frontstretch. “The deal we had worked out this season, but the numbers don’t really apply going into next year now that it’s an SHR program. I’d love to be a part of it if it were feasible, but I don’t know it will be.”

With 14 starts in 2017, Mears earned two top 10s and ended the year at Homestead with an 11th-place finish. The result capped off a consistent run inside the top 10 for most of the night. For the rest of 2017, however, Mears didn’t have it as easy.

“We had a hard time acquiring the equipment we really needed to compete,” he said. “That stuff isn’t there to buy even if you want to buy it. You have to have relationships.

“At the end of the day, if you could just pop some good quality cars in with this program, we could’ve run inside the top five all year. It was literally down to equipment we weren’t able to acquire.”

With the possibility of Mears not returning to NASCAR in 2018, the Californian is content with the growing realization that Saturday could’ve been the end.

“I’d be OK with that. But to say I’d be 100 percent OK would be wrong,” he said. “If I could get a good opportunity and go racing, I’d do it in a heartbeat and I’d do it with passion and do it 100 percent. But I’ve already wrapped my head around that I very well could not be here next year.

“It’s just all about money. If you can have some dollars behind you, you can go racing.”

With that mindset, Mears has entertained the possibilities of competing in a different series.

“I’m looking at a lot of other things as well, outside of NASCAR,” he said. “I’m looking at sports car stuff, off-road and rally stuff. Kind of looking at that whole thing. My roots are in the off-road thing so doing that would be a lot of fun. I’ve been here for a long time so it’s weird to think I may not be here next season. But it’s a good possibility I may be somewhere else.”

One option Mears likely won’t be open to is a return to mid-pack NASCAR equipment, where he has been for most of his career since 2010.

“Though I enjoyed working with these guys, it’s like beating your head against the wall,” he said. “I’ve done this for so long, if I do it again, I really want to — like Elliott Sadler. He was on the bad side of it, didn’t look like it would work out. He has a sponsor behind him now and he’s running for championships every year.

“To me, at this point in my career, that’s something I’d be more interested in. If it’s more of a backmarker, mid-level team, I don’t think you’ll see me out here.”

On the personal side, 2017 would be labeled a transition year if Mears doesn’t return to NASCAR. Following a 488-race strong Monster Energy NASCAR Cup Series career, Mears lacked perspective outside of racing, something he feels he gained approaching the one-year anniversary of his last laps in the Cup car at Homestead.

“At times, it seems like it’s been forever and other times I feel I could get right in — like it was yesterday,” he said of racing Cup. “It definitely has changed a lot, not running every single weekend. It’s been an odd year, but at the same time, a good year. I’ve been really getting to spend time with my family.

“As far as racing goes, it’s been interesting. It took half the year for it to soak in that I wasn’t running full-time. It was nice to realize there is life outside of motorsports.

“I’ve been very fortunate to be a part of the sport for this long. I’ve done it for 15, 16 years and to be a professional sport at this level for that length of time is good by anybody’s count. So, I’ve enjoyed it. I’ve had fun. I haven’t had as much success as I would have liked, but at the same time, I’ve really enjoyed racing.”