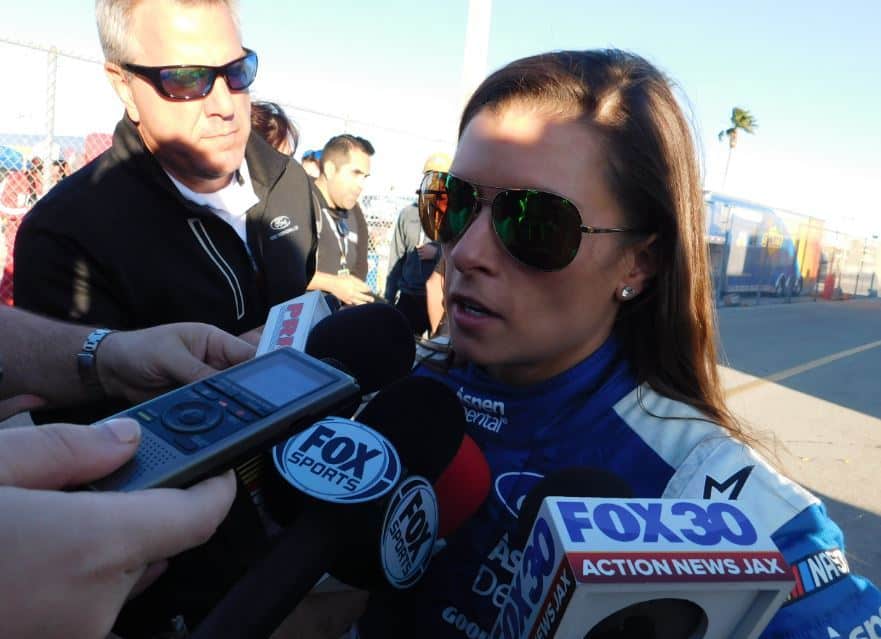 Sunday’s Ford EcoBoost 400 was the last race in the Monster Energy NASCAR Cup Series for Danica Patrick as a full-time driver.

Unfortunately for Patrick, her last intermediate track race in NASCAR ended in flames.

On lap 142, the Stewart-Haas Racing driver was running a lap down in 18th when she got loose entering turn 1 and hit the SAFER Barrier.  Kasey Kahne simply could not avoid Patrick and ran into the back of the Aspen Dental Ford.

Patrick attempted to drive her Fusion back to pit road, but the car caught fire en route.  Eventually, she was forced to stop and bail just shy of pit road entrance.

Afterwards, Patrick blamed herself for the wreck.

“I hit the wall in 3 and 4 and got some fender rub on the tire,” Patrick said after exiting the Infield Care Center.  “I ran a couple laps, and there was smoke in the car, and they thought it was alright but it wasn’t.”

With the crash, Patrick collected her 11th DNF of 2017.  10 of those 11 DNFs have been due to crashes, including all four restrictor plate races and four intermediate tracks.  That is the most of all drivers who have started all 36 races.

After announcing her retirement Friday, Patrick has only one more Monster Energy NASCAR Cup Series start left in her career.  That will be the Daytona 500 in February.

“Yeah. Sure,” a frustrated Patrick said when asked about her next race. “Let’s just hope I don’t end up in the medical center.”

Ok enough Danica, she’s gone. She couldnt Get a sponsor so nobody would hire her to drive for them. She didn’t retire on her terms, instead she was let go, fired, whatever you want to call it. Danica Once Again Showed Shes A driver, Not A Racer. She Wrecked Herself Out Of The Race And She Was Angry She Couldnt Blame Anyone Else. But She Tried. She Said The Team Told Her The Tire Rub Looked Ok, But It Wasnt. I Think The Team Just Wanted It Over And Her Gone For Good.
We Will See In 90 Days If She Has A Sponsor And Ride At daytona. Bet She Wont Support Ricky At The Track For Every Race Next Year.
Whew, No More Danica Articles, Finally.

You could see she over corrected. With the front wheels all the way to right after being loose it was going into the wall automatically.
She brought something to NASCAR that the other drivers could not do. Haters & Purists won’t have a clue. Race wins were not going to happen, unless it was like a Chris Buescher or a Aric Almirola win who is replacing Danica. So look for more of the same from the SHR #10 in 2018. But this time you won’t have Danica Patrick to kick around anymore!

Tom B
Reply to  Tom B

Danica was criticized for not inquiring about Almirola when they collided in Kansas this year. i haven’t heard if Kahne inquired about Danica’s condition after he rammed her and the car burst into flames driving back to the pits. The TV announcer said Danica parked it in front of the pit entrance causing pit road to stay closed. Danica actually parked it out past the pit entrance on the apron of the race track.