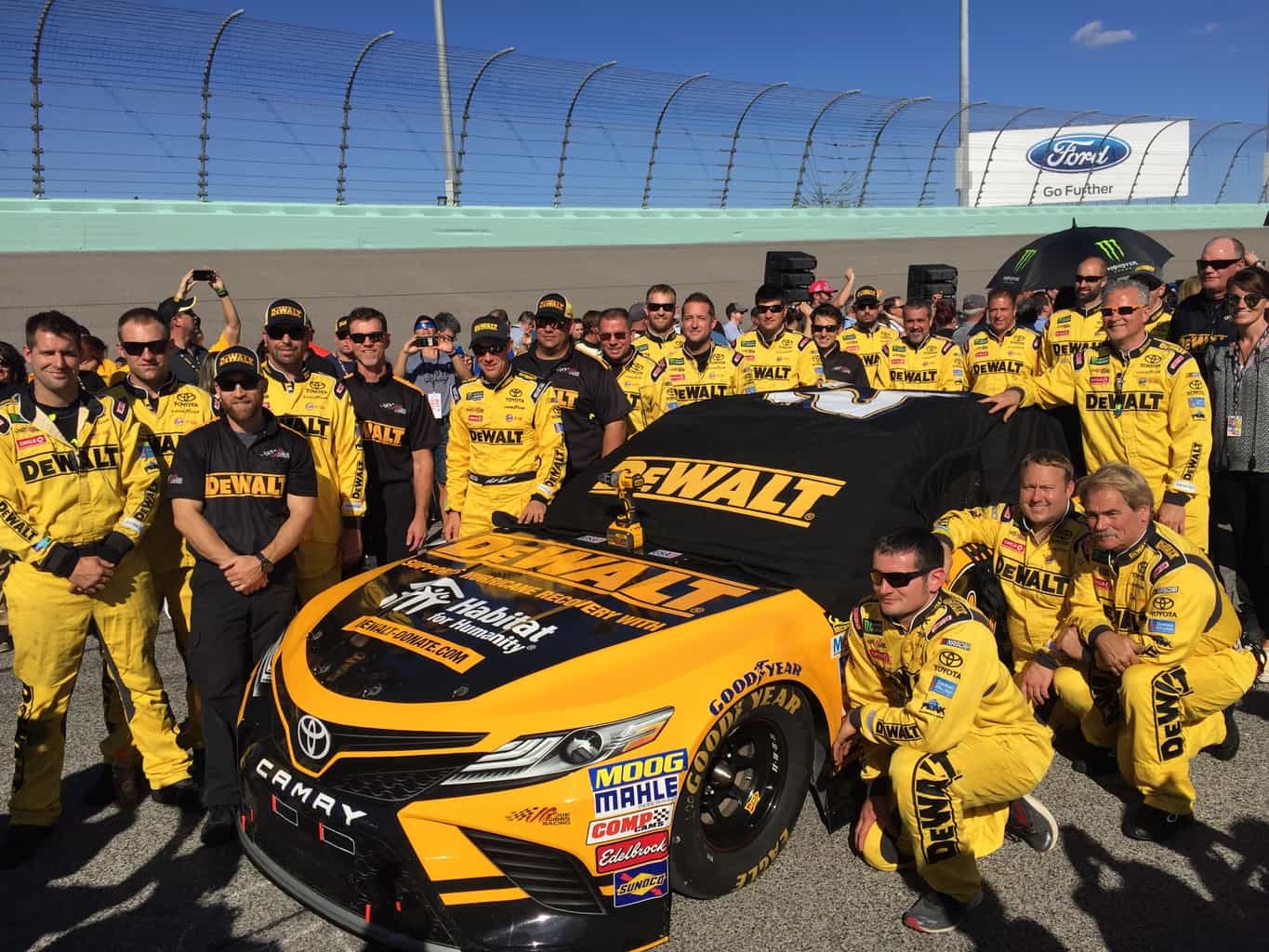 When Matt Kenseth found out Amy Earnhardt, the wife of Dale Earnhardt Jr., was pregnant, he immediately texted the man he competed against for the 2000 Rookie of the Year trophy.

“I should’ve gotten a text,” Kenseth said to Earnhardt. “I shouldn’t have read that on social media.”

These are the dry humor moments that Kenseth’s peers will always remember.

The veteran was dead honest on if he was ready to end his Monster Energy NASCAR Cup Series career Sunday at Homestead-Miami Speedway. But although it wasn’t the optimal situation for Kenseth, these were the cards he was dealt.

One week after a dream victory, ensuring he’d go out on top the Homestead race saw Kenseth fading into the background. He ended the night with an eighth-place result, his 18th top 10 on the year.

When the 2003 Cup champion exited his No. 20 car, Brad Keselowski was the first one to come over and congratulate him on a career. But other than Keselowski and a handful of media, Kenseth left the sport keeping to himself and true to his character, just like he’s always been.

“It is a little hard to explain,” he said. “It’s pretty humbling and it makes you feel good when other people go out of their way to come and tell you something, show their respect for you or they enjoy being around you.”

The crowd Sunday night wound up swarming around Earnhardt, not Kenseth, on pit road. But NASCAR’s Most Popular Driver made sure to discuss his relationship with a man he shared the spotlight with the last 17-plus years.

“You don’t think about it until you get to this point in your career that all of the drivers have such a great influence in your life,” Earnhardt said. “We’ve been bus lot mates for so many years, and he always would give me hell for not doing the right thing when it comes to treating each other as friends.

“I love the person he is. I love him whether he races cars for a living or doesn’t. We’re going to be friends for a long time.”

Earnhardt’s sentiment concluded a day full of emotions for Kenseth.

Prior to the race, he arrived to the No. 20 machine with wife Katie and his three daughters, Clara Mae, Grace Katherine and Kaylin Nicola. The family was greeted by a swarm of people dressed in yellow, orange and black, with fans screaming his name.

His entire No. 20 squad gathered around, waiting for him to take one final group picture.

“A lot of people did some nice things for me,” Kenseth said. “It really makes me feel good. It was a fun week, but I wish it was capped off a little better.”

Even when the checkered flag fell, Kenseth was left itching for more. It was clear his competitive drive is still there, and he wanted to go out with another win after capturing his final one in the penultimate race of his career at Phoenix International Raceway.

After spending the first 13 years as a full-time Cup driver with Roush Fenway Racing, he left the organization for Joe Gibbs Racing. In his time at Roush, he won 24 races, with another 15 trophies coming during his five seasons at Gibbs.

I don’t think he got the same support after Martinsville. Maybe they’re glad he’s gone.

I think the Dale Jr. / Matt Kenseth comparison shows just exactly where NASCAR went over the edge and has been in steep decline for many years. We have 24/7 coverage of Junior in his final year and we have Matt being given the boot from the best organization in NASCAR today. One of these two ran up front all year; one of them won this year; one of them is a past Cup Champion; one of them was Rookie of the Year the same year the other was not; one of them has more wins than the other; one of them is named Kenseth and the other Earnhardt and that, my friends, was the deciding factor. It wasn’t about racing, it was about marketing a name. A lot was put on the shoulders of Dale Jr. to carry the entire sport when his father died. He was not up to the task. Just look where the sport has gone from the height of popularity in the late 1990’s to where it is today. That was the fault of NASCAR. When they saw he wasn’t carrying the load, they started the insanity of making all sorts of gimmick changes to try to entice people to continue watching. All that did was drive away real race fans. And so we have what we saw on Sunday. Everybody swooning over Junior and only the diehard fans thanking Matt for being the poster boy for what stock car racing is supposed to be about. The “Junior Nation” isn’t enough to make NASCAR relevant, it needed more Matt Kenseths’. I, for one, will miss seeing Matt on the track. He made the sport enjoyable for me just like Terry Labonte did before him and David Pearson did before him.

I could not agree more with Jim Russell if I tried. Well said.

NASCAR and “the media” didn’t go over the edge with Junior. Fans liked him because he sounded like a racecar driver & behaved like one instead of a corporate shill. So maybe NASCAR & the media should’ve suppressed that, huh?

It’s weird to hear people berate NASCAR for promoting a driver who sounded like a driver and not a corporate media spokesman. “He sounded like he’s from the south and loved cars” is what killed NASCAR? That’s a hilarious hot take.

The thing that killed NASCAR is kids don’t like cars nowadays. People my age and older are dying, and we’re the last two generations to turn wrenches on cars.

I’m a Kenseth fan all the way, and I sure as hell didn’t need to see him on TV every two seconds to know he was better than Junior. I liked him just the way he is – quiet and a winner on the track. Good enough for me.

If the last dude who sounded like he’s from the south is what killed NASCAR, so be it. I’ll ride that one down all the way.

How could Junior “carry the entire sport”? No driver could. For every Cale Yarborough, there needs to be a David Pearson. For every Waltrip, a Dale Sr. and for every Jeff Gordon, a Tony Stewart. Only Junior’s detractors expected him to fill his father’s shoes, but Junior isn’t his father. And he has never been the driver his father was, but that’s okay. No one can blame him for pursuing the same career as his father. He’s won a respectable number of races, earned more money than most drivers, and made a lot of his fans happy. What more could any of us reasonably expect from him?

Carl, I agree with you, no athlete can carry an entire sport but that didn’t stop NASCAR and the media from thrusting that responsibility on Junior. I don’t think he was ever comfortable with the responsibility but he did do his best to try and do it. I’ve come to like Junior as he got older. I’m just bummed that a better racer has been so overshadowed by a racing “personality”.

If Matt had announced earlier that he was going to have to step away, perhaps there would have been more people showing their appreciation of his career. It seems that Junior did all he could to include Matt in much of the hoopla, both posing for pictures with their ‘rookie’ paint schemes and crews. It’s a shame that we weren’t given more of Matt’s dry sense of humor during the years.

Matt could not have given advanced notice of his departure since it was not his intent to depart. He was given the boot despite his ability to run up front and win races because he is 45 and makes too much money. As for Junior including Matt in all the “hoopla”, it should have been the other way around because I judge success by accomplishments, not popularity inherited from a family member. Don’t get me wrong, I acknowledge Junior’s place in the sport. He has even evolved into a pretty nice guy. He was an OK driver in superior equipment his entire career. Matt Kenseth is a top notch racer who won’t get to do what he does best and will be forever overshadowed by a “personality” who was nowhere as good. Sour grapes on my part…yes!!