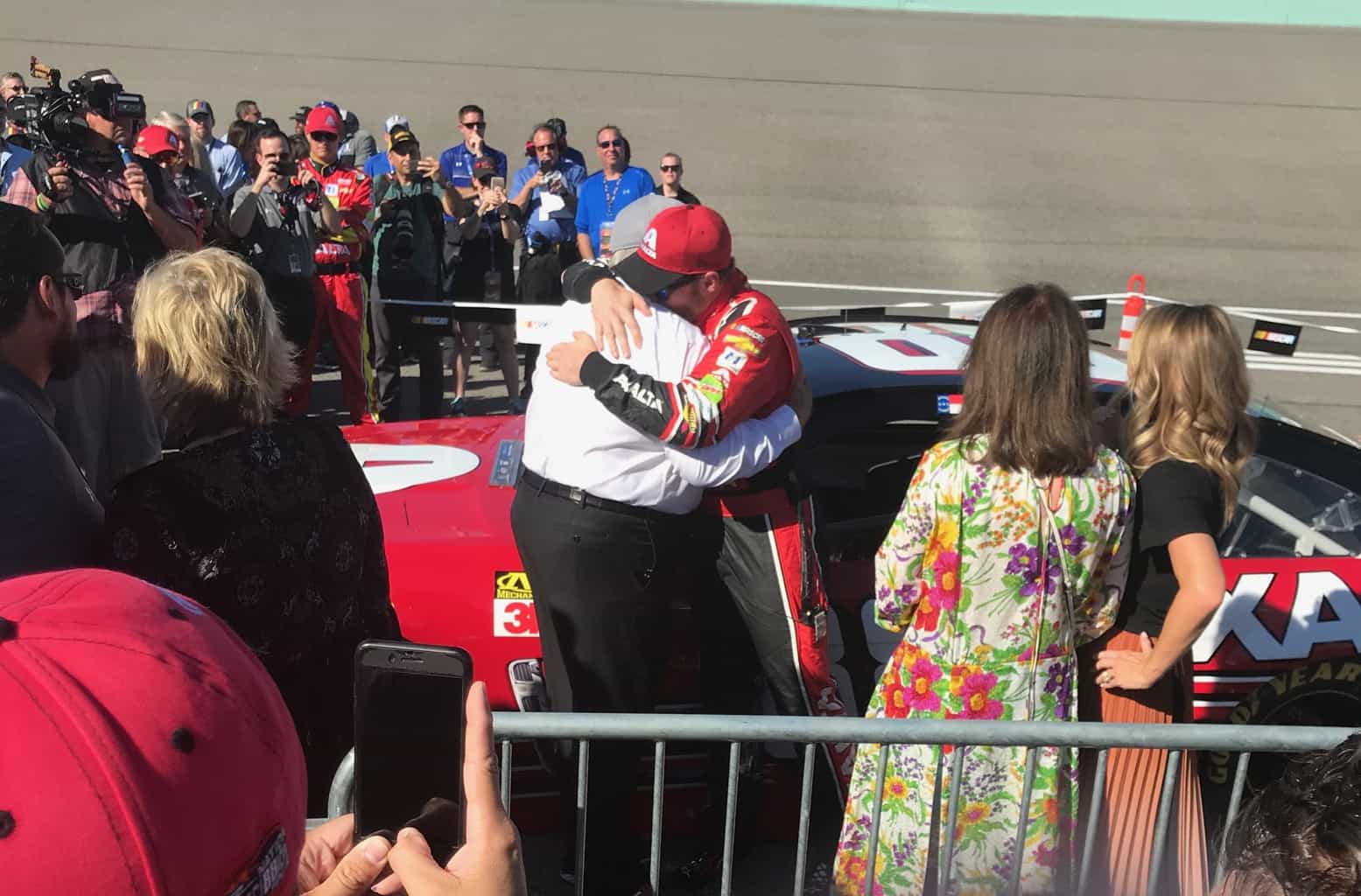 It was obvious that Dale Earnhardt Jr. was going to be emotional heading into Sunday’s Ford EcoBoost 400 at Homestead-Miami Speedway. However, the most emotional was when the 18-year Monster Energy NASCAR Cup Series veteran was greeted by team owner Rick Hendrick right before he climbed into the No. 88 machine.

Earnhardt spent the final 10 years of his Cup Series career with Hendrick Motorsports. In the past, he has admitted that he looks up to Hendrick as a “father figure.” It all came full circle on Sunday.

During pre-race ceremonies, Hendrick stopped to see Earnhardt and the tears were running down Little E’s face, visible through his glasses. The 14-time most popular driver said it was the hardest part of the day.

“We tried to talk to each other before I got in the car, but I couldn’t stop crying,” Earnhardt said following a 25th-place finish in his farewell race. “I told him how much I appreciated what he had done for me personally and professionally as a driver – that was easy to thank him for that. But what he’s done for me as a person has been so much more important than anything else.

“He’s helped me become a better person and a good husband. He’s been like a father to me, and I really feel like he filled a void for me in my life. You hope that doesn’t change, and I don’t expect it to. He’s like a father and has done so much for me personally. I’ll never be able to repay that man for what he has done for me.”

Over the course of the past 10 seasons, the No. 88 team had its ups and downs. Between the spring race at Michigan International Speedway in 2008 and the spring race at MIS in 2012, Earnhardt went winless (143 races). Hendrick stuck with the driver.

In the first four seasons together (2008-2011), Earnhardt had a best finish of seventh in the championship standings. In 2009, he finished 25th in points, the lowest of his career while running the full 36-race schedule.

“I know that had I been anyone else, he could have easily made a change, got another driver,” Earnhardt said. “There were years I wasn’t doing the job on and off the track and he could have changed who was driving his cars, but he said ‘We’re going to get it right. I know we can get it right.’ I was so thankful for him for sticking with me through the tough times. I just can’t believe he did that.”

In 2013, he failed to reach Victory Lane, but finished fifth in the standings, a career-high with HMS. Earnhardt found his stride in 2014 winning four races. In 2015, he found the Winner’s Circle three times, with his last career victory coming at Phoenix International Speedway.

One moment in particular sticks out to Earnhardt during the process.

“We won some races – we won the Daytona 500,” he said of his time at Hendrick Motorsports. “That made me so happy to make him happy and do it for him. I could go on and on. He’s done so much for so many people and he’s just an amazing person. We should celebrate him.”

Earnhardt will end his 10 seasons with HMS with nine victories, 73 top five finishes and 139 top 10s in 340 races. But it’s the friendships that he will cherish the most, specifically with Hendrick..

Arguably the most popular driver in NASCAR history will ride off into the sunset as a 26-time victor in the Cup Series with a pair of XFINITY Series championships. Moving forward, his focus will be directed to the broadcast booth, as well as JR Motorsports, hoping to crop talent for Hendrick as he’s done for the past handful of seasons.