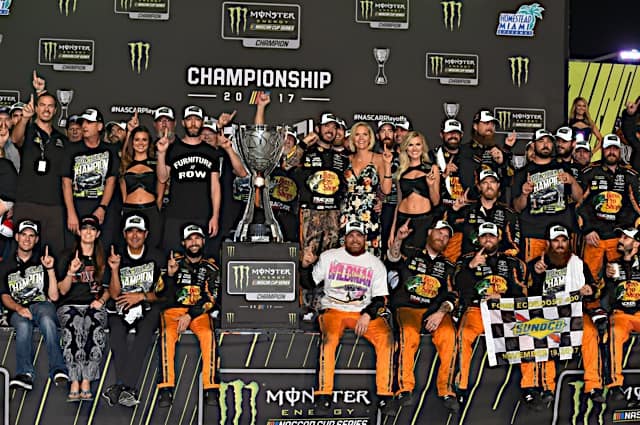 Under just about every conceivable points system, Martin Truex Jr. would be the champion across the board.

Truex had a truly fantastic season where he won eight races, 19 top 5s, and 26 top 10s. His average finish of 9.4 is the best for a championship winning driver since Bobby Labonte in 2000.

Truex began his career in 2006, driving for the ill-fated Dale Earnhardt Inc. After four lackluster seasons with DEI and Earnhardt Ganassi Racing, Truex jumped over to Michael Waltrip Racing. Truex had some great runs in 2012 and 2013, but his team was dissolved after 2013 due to the infamous spin gate incident knocked him out of the playoffs.

Some may have thought his career was over, even Truex. The New Jersey native had won just two Cup races in eight seasons and had developed a reputation of choking away wins in his last couple of seasons at Michael Waltrip Racing. The journey man driver didn’t even have a finish in the top 10 in points in his first eight years of competition.

In 2014, Truex joined Furniture Row Racing and had a disaster of a first season, finishing 24th in points for the small Denver, CO based team. But on Dec. 3, 2014, everything changed.

On that day, a team engineer and former Canadian stock car driver named Cole Pearn was promoted to be the team’s new crew chief. 11 months after this announcement, the team was in Homestead competing for a championship.

The final puzzle piece came in 2016, where a switch to Toyota and a technical alliance with Joe Gibbs Racing has propelled the small underdog team from Denver into one of the sport’s powerhouses.

Throughout the last few years, and this one specifically, there has been more than enough heartbreak and tribulation for the team and for Truex. Crew member Jim Watson died of a sudden heart attack last month. Shelly Pollex, the longtime girlfriend of Truex, has faced on-and-off battles with breast cancer. Owner Barney Vissar couldn’t even watch Homestead from his hospital bed after suffering a heart attack earlier this monrth that required triple bypass surgery.

Truex’s path to the championship, like many before him, was littered with bumps in the road on track. But few have faced the personal challenges Truex has had to face. Those who have, like Davey Allison or Dale Earnhardt Jr., never even ended up hoisting the Cup. But Truex did, holding off Kyle Busch in the waning laps and winning both the Ford EcoBoost 400 and the 2017 Monster Energy NASCAR Cup Series championship.

Sometimes the favorite to win the championship… wins the championship. It can’t always be like the last year when Jimmie Johnson squeaked it out after the other challengers took themselves out. This whole weekend proved that fact; the champions of all three national series dominated throughout the season and entered Homestead as the favorites to win.

As always, all four of the championship four’s best track became Homestead. Each of them ran up front and in the top five for the vast majority of the race. Ford had a slight edge in the early going, but the Toyota teams built their cars for when the sun went down and the track cooled; Truex and Busch only lost their stranglehold at the top of the championship heap during green flag pit stops after the sun went down.

Finally, Kyle Larson will be a force to be reckoned with the year he makes it to the Championship 4. He dominated most of the race before fading a bit at the start of Stage 3, then came back and challenged Busch for second in the last 10 laps of the race. He’ll be unstoppable if he can just make it there.

Where… did the defending race winner (and champion) end up?

Jimmie Johnson had an awful day, finishing 27th and three laps down in his final race as the defending Cup Series champion. It’s been an awful last half of the season for Johnson, with no top 10s since Charlotte in October and one top 5 since winning at Dover in June.

When… will BK Racing Turn Things Around?

It was a difficult weekend for one of the sport’s underdog operations. At Homestead, Joey Gase drove the No. 83 into the wall just five laps into the race and was the first car out. The team literally would have been better off starting and parking because at least then the car wouldn’t be all torn up.

The team’s other Toyota, driven by rookie Corey Lajoie, finished a disappointing 31st. That wrapped up a year where BK fought a variety of on and off-track problems despite running with the same manufacturer (Toyota) that captured the championship. There was also an infamous monetary dispute with former driver Gray Gaulding and a revolving door of funded sponsor/driver combinations.

Since 2012, when Travis Kvapil pulled a 25.5 average finish the team has slowly but steadily decreased in performance. While they’ll return in 2018, fielding at least a one-car team it’s an organization that needs some serious retooling.

How… did Kyle Busch lose this race?

Busch’s chances at a championship ended because of his brother Kurt Busch. Over the last 100 laps, Busch went on a one pit stop strategy, while the other drivers banked on a two stop strategy. With tires not falling off as much as was thought, Busch would have probably won both the race and the championship if the elder Busch hadn’t of wrecked on lap 228.

The caution put everybody on the same cycle and forced Busch to have to drive up through the field to have a shot at Truex in the closing laps. When he did, Busch just couldn’t get close to Truex in spite of his charge through the field, and he had to settle for second.

Why… was Dale Earnhardt Jr. such a special driver?

It was the final Cup Series race for the people’s champion. Earnhardt’s impact on the sport as the most popular driver when the sport was at the height of its popularity (2005-2009) was enormous. He never won a championship, but he won millions of fans throughout his career with his down-to-earth personality and perseverance of everything he has gone through in his career.

Losing his father in such a way as he did would have broken a lesser man, but his best years (2003-2004) came right after his dad’s death. A broken relationship with his step mom didn’t allow Earnhardt to continue his father’s legacy with DEI, but he was able to rebound with 10 medicore-to-great seasons with Hendrick Motorsports. He missed half a year due to concussions, but he made a point to race one more season just to prove he could still do it.

And throughout it all, Earnhardt is still himself. His love for the sport has never waned, and he’ll continue to give back to it for years with JR Motorsports. He didn’t have his dad’s career, but he isn’t his dad. With Jr. beginning to start a family, I’m sure Dale Sr. couldn’t have been prouder of how his son’s life has turned out.

Mr. Finley missed the fact checking class while attending the school of Journalism at Salisbury University.

NBC did a very poor job of covering the final NASCAR race of the season. Five picture in a picture just didn’t work and it was hard to keep tract of who was doing what. A lot of times nobody was talking to keep viewers informed. Something has to be done to make it better.

Bill B
Reply to  Ray Newton

You do realize that NBCSN (cable channel) had on the 5 split screen deal with in car cameras and NBC (broadcast channel) had the usual coverage without the split screens, don’t you? The race was on both channels with the different format.

If the TV time out points didn’t count for the Fib Four, why have them?

The 51 was pulled off for going too slow. Since when did Brian care?

I’m not sure that Truex’s challenges were quite the same as those faced by Davey Allison, considering Davey died in a helicopter crash. One could argue that the drivers death might impact that drivers championship contention.

Nine mediocre to great seasons at HMS? Five winless seasons and bottom half points finishes. Mediocre would be a step up from there. He had two good to great seasons, five absolutely lousy seasons, and two mediocre seasons. I doubt his down to earth personality had much to do with his overwhelming popularity. More likely, his connection to the legacy of his father propelled his popularity. There was a time that his ‘down to earth personality’ was criticized in the media hard to get excited about and hard to take seriously. Especially during a time when Dale Jr. himself, by his own admission, wasn’t really taking anything too seriously. I like Dale Jr., but I would like him more if the media discussed him truthfully without looking for ways to embellish his admirable legacy.