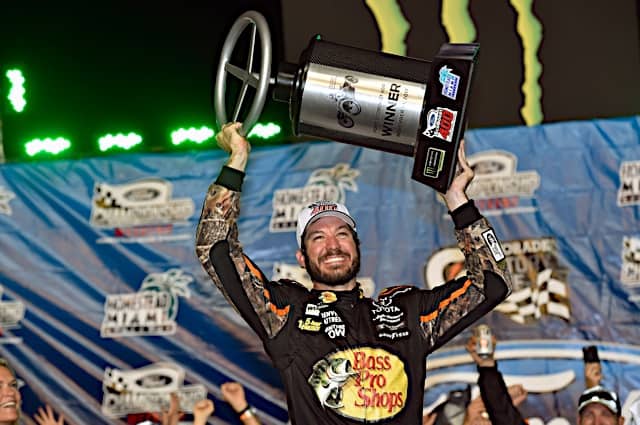 If there is one thing that NASCAR fans of all stripes love, it is comparing the careers of different drivers.  Martin Truex Jr.’s career took on a new dimension Sunday after winning his first championship at NASCAR’s highest level.  Whatever else Truex accomplishes in his career, he will always be tied to the select group of racers who have captured titles in what is today known as the Monster Energy NASCAR Cup Series.  Thus far, Truex’s career path might be linked most with another champion who was at Homestead-Miami Speedway this weekend, Dale Jarrett.

Truex’s journey to winning the championship has been a long, winding odyssey.  He showed flashes of great potential racing for Dale Earnhardt Inc. and Michael Waltrip Racing, but it took the right situation for Truex to really challenge for wins and championships on a regular basis.

Jarrett’s career in NASCAR’s top division got off to a similar start.  Longtime fans’ likely earliest memories of Jarrett are probably either watching him win the Daytona 500 in 1993 with his father Ned on the call for CBS, or his first win in a photo finish at Michigan with Davey Allison in 1991.  Since NASCAR was still two years away from electronic scoring at the time, the official margin of victory is eight inches.

Yet those early wins did not come easily.  Jarrett started competing regularly in the then-Winston Cup Series in 1987.  Before joining up with Gibbs in 1992, he raced mostly for Eric Freedlander, Cale Yarborough and the Wood Brothers.  With all those teams, and with Gibbs, Jarrett showed potential, but he needed to find the right situation to take his career to the next level.

Robert Yates would give Jarrett that golden opportunity.  In 1995, Jarrett took over Yates’ No. 28 car as a long-term substitute for Ernie Irvan.  Jarrett and Yates had a good first year together, winning at Pocono Raceway and earning 14 top 10s in 31 starts.  When Irvan came back toward the end of the season, Yates expanded his operation rather than replace Jarrett.  For 1996, Jarrett moved to the No. 88 car and was paired with crew chief Todd Parrott.

The addition of Parrott was the final piece of the puzzle that Jarrett needed to emerge as one of NASCAR’s superstars.  Jarrett had never had a multi-win season before 1996, but in the next four years he would win at least three races.  From 1996 to 1999, Jarrett scored 18 victories total, including a Daytona 500, two Brickyard 400s, a Coca-Cola 600, and finally the Winston Cup in 1999, his 13th season as a regular competitor.

If there was ever a driver who could relate to Jarrett’s career arc, it is Truex.  His first win came in 2007, his second season.  Six seasons passed before Truex won again.  Along the way, Truex dealt with the decline of DEI and its absorption into Earnhardt-Ganassi Racing in 2009.  Truex then left for greener pastures at MWR, but that organization had to endure its own share of growing pains.

Things began to pick up for Truex and the No. 56 team in 2012.  A hot start to the season enabled Truex to reach the Chase for the first time since 2007, but inconsistency during the postseason sunk his title efforts.  The following year, Truex finally ended his long winless drought, taking the checkered flag at Sonoma Raceway.  The team had to fight hard in the following months to make the Chase again, especially after Truex injured his wrist in a crash at Bristol.  But when the dust settled at Richmond, Truex was in.

By Monday the following week, he was out.

NASCAR hit MWR with major penalties after the team manipulated the ending of the race.  The intent was to get Truex in the Chase, but a 50-point penalty bumped the No. 56 out of the postseason.  Even more detrimental was NAPA’s decision to end its sponsorship of Truex’s team.  Once NAPA pulled up its stakes at MWR, there was no No. 56 team for Truex to go back to in 2014.

Instead, Truex signed on with Furniture Row Racing, the single-car operation from Denver, CO.  While the team had made the Chase with Kurt Busch the previous year, the 2014 season was a nightmare.  Truex finished in the top 10 only five times, and led a grand total of one lap, coming at Talladega.  His career looked like it had been left for dead.

Then the pieces started to come together.  Truex got a new crew chief, Cole Pearn, in 2015.  Pearn and the No. 78 crew hit on a setup that gave their car plenty of speed, particularly at the intermediate tracks.  After a few missed opportunities, Truex won at Pocono, snapping another long winless drought.  As the season went on, Furniture Row’s turnaround was dramatic and complete.  Truex scored 22 top 10s across the 2015 season and advanced to the championship round of the Chase.  Suddenly, Truex was in the best situation of his career.

When Furniture Row switched to Toyota in 2016, the team only got better.  Truex’s win total has jumped from three to 15 in the last two years.  By itself, 2017 yielded a career-best and season-high eight wins.  Most importantly, the No. 78 team adapted best to the new stage racing format.  In his 12th season, Truex captured his first championship.

Few drivers have been instantly successful racing at NASCAR’s top level.  However, it is rare to see a driver bounce around from team to team early in his or her career, only to explode after a decade in NASCAR’s Cup Series and reach greater heights than anyone could have imagined.  Yet Jarrett and Truex did just that, fighting through the trials and tribulations of a life in motorsports to reach the pinnacle of American stock car racing.

Jarrett hung up his helmet almost 10 years ago.  He has followed his father’s footsteps into broadcasting, remaining a visible figure in the sport and a great representative of NASCAR.  Jarrett’s 1999 title has stood as a monumental achievement for both him and Yates, a testament to two men who built careers of excellence from the ground up and won the admiration of their peers.

Truex’s championship will carry a lot of the same meanings.  His title is the ultimate validation for Furniture Row Racing and team owner Barney Visser, who slowly built his team into one of NASCAR’s best.  Pearn has gone from an unknown to one of NASCAR’s greatest crew chiefs in three years.  For the driver himself, Truex has survived the lowest of lows and emerged a stronger driver than he has ever been.  His title, like Jarrett’s, is a celebration of an iron will.

It will be interesting to see if Aric Almirola will be the next Jarrett/Truex. He has talent, and now he has a prime ride.