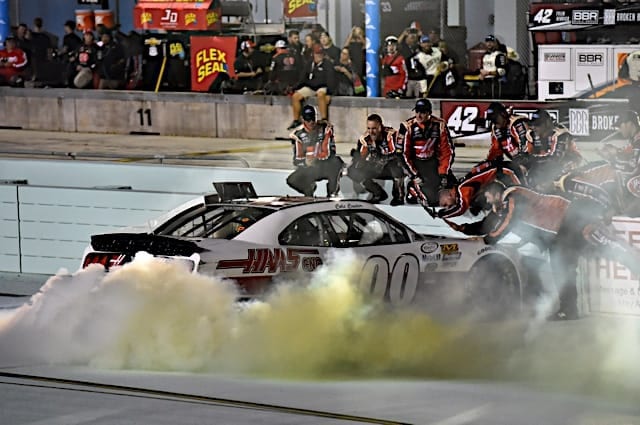 Saturday’s Ford EcoBoost 300 was the Cole Custer show — everyone else was second-class.

The driver of the No. 00 grabbed the lead for the first time shortly after lap 10 and put on a quite the battle with Tyler Reddick for the race lead until lap 60. Right after the beginning of the second stage, Custer pulled away and led the remainder of the race.

Custer took the checkered flag with a 15.4 second margin of victory over Sam Hornish Jr., who won the owner’s championship for Team Penske.

“It’s unbelievable,” Custer said of the victory. “I haven’t been able to do this in a while.  It’s been a pretty long time, but I can’t stress enough how good this car was.  It’s unbelievable.”

Custer ends his rookie campaign with seven top-five finishes and 19 top 10s. By leading 182 laps on Saturday, he ends the season with 302 laps led, second among XFINITY Series regulars.

After finishing the first stage in 12th position, William Byron jumped up the leaderboard and finished the second stage in fifth. When Daniel Hemric had to pit to replace a battery on lap 61, it was a battle between the No. 9 car and Elliott Sadler.

Byron and Sadler’s battle went down to the wire until the No. 1 dive-bombed Ryan Preece, hoping to put a car between the two championship contenders. Not pulling it off, Byron was able to get by as Sadler went into the outside wall.

Byron picked up his first NASCAR championship as he graduates to the Cup Series for next season. He ended the race in third, 25 seconds behind Custer.

Byron was the fastest XFINITY driver for the second half of the season, winning four of the final 20 events. On Saturday, he claimed the season-long prize and earned his first NASCAR title. He spent much of the day between third and sixth, despite finishing 12th in the opening stage. The No. 9 car did not lead a single lap, nor did the other three championship contenders.

The JR Motorsports rookie swapped the championship lead back and forth with the 20-year NASCAR veteran multiple times over the final 30 laps. Byron had the advantage and then got into the wall, Sadler got by. The No. 9 car chased the No. 1 back down and got by, etc.

It was one of those championship battles that looked like it was going to come down to the final lap. But it was the veteran that made a mistake by diving under a second-year driver, that handed the championship to Byron.

Byron ends the season with four victories, 12 top-five finishes and 22 top 20s. JRM swept the top three positions in the points, something the organization held for much of the season.

Byron and Sadler battled hard, swapping the championship lead back and forth on numerous of occasions during the final 103-lap sprint to the finish. But with eight circuits to go, it went down the drain when Sadler went below Preece but didn’t complete the pass.

Byron, who was running the outside line, got a huge run and was able to get by Sadler after the No. 1 car got into the outside wall. As soon as Sadler unbuckled, he charged at Preece before NASCAR officials pulled him away.

“He wasn’t because the [No.] 22 was a half a lap ahead of him, so he wasn’t racing anybody,” Sadler said of Preece. “Four of the last six years we finished second in points, and tonight is the closest I’ve ever been to winning a championship.”

Sadler and Byron traded paint and rubbed fenders, but the move with eight laps to go ended any chance of it coming down to the last lap. The No. 1 car limped around for the final six laps after cutting a tire, finishing eighth, the last car on the lead lap.

In qualifying, Hemric proved to the JR Motorsports trio that he had a hot rod by qualifying fourth, the highest of the Championship 4 on Saturday. After Stage 1, he was the championship leader, finishing seventh.

Until lap 53, Hemric was the championship leader before he was passed by Byron. But just eight laps later, the wheels fell off. The driver of the No. 21 pitted to replace a battery, ending his chance of his first career title as he went 12 laps down.

“We came down here and we did our jobs,” Hemric said of the performance. “The racetrack was starting to go through the transition of cooling down, and when we left pit road, I started losing volts for whatever reason, and not exactly sure why yet, but we’ll get to the bottom of it.”

Hemric ended the night in 34th, which was his second worst finish of the season (38th at Talladega). The No. 21 car went an additional lap down, en route to a fourth-place finish in the championship standings.

“Not ideal by no means, but sometimes it’s just not meant to be. If it was meant to be it would, but it just wasn’t our day,” Hemric said. “But I don’t want to let that take away from everything from our efforts that we did all year to put ourselves in position and to get ourselves here.”

Hemric will be one of the championship favorites in 2018 as he will be returning to the XFINITY Series with Richard Childress Racing.

Ty Majeski made his third start of 2017 on Saturday for Roush Fenway Racing, earning his first career top-10 finish.

The No. 60 Ford started the race in ninth and jumped to the top five and finished sixth in the opening stage. After pit stops, Majeski fell down the scoring pylon, still finishing eighth in the second stage.

However, the 103-lap run to the finish was a downfall for Majeski as he fell outside the top 10. When the checkered flag flew, the No. 60 car was back into 10th.

“We had a good car early on,” Majeski said after the race. “I think as the sun went down, we lost the balance a little bit and just got way too tight in the center. I didn’t have the drive off to go with it. That was kind of our Achilles Heel –center turn—and couldn’t get back to the throttle and it hurt us on the short run and lost some track position and couldn’t ever get it back.”

In his two previous starts, Majeski had finishes of 16th and 34th, respectively, at Iowa Speedway. With the top-10 effort, he hopes he proved to team owners that he can run with the best in the XFINITY Series.

“We ran pretty good today,” he said. “A lot of the day we ran in the top five to top eight and that’s something to be proud of. We just have to keep up with the racetrack and build up our notebook and hopefully, we will be better the next time we race.”

Majeski has no confirmed plans for 2018 and gave no signs of moving to the XFINITY Series. With performances like Homestead, it’s possible he gets more opportunities next season.

Because it was the first time that NASCAR regulated drivers from running the XFINITY championship event, there was only one Cup regular in the field. Corey Lajoie finished 15th after declaring for series points prior to Homestead.

Appears that LaJoie changed what series can earn points (allowed to do that w/NASCAR approval, forfeit all points earned in previous series). https://t.co/tZc6ZRa5Bc

“I haven’t done that in a while.  We were so close to making it last weekend and really wanted to end strong.  We knew we were gonna be really good this weekend.” – Cole Custer

“I didn’t have any brakes left. Not sure what happened. We’ve been having a little bit of a brake issue. I may have rode them too hard trying to get the car to do what  I wanted it to do.” – Sam Hornish Jr.

The XFINITY Series will distribute its season awards in a combined ceremony with the Camping World Truck Series. This year, the banquet relocated from Miami to Charlotte, where most of the teams are based.

Custer put on a one-man show on Saturday to capture his first-career victory. It’s the first XFINITY victory for Stewart-Haas Racing, which debuted in the series this season.

Byron was the most competitive of the XFINITY drivers throughout the year and rightfully earned the title. He was the only XFINITY driver to have more than two victories this season (four victories). While his JR Motorsports teammate Justin Allgaier led more laps, Byron turned up the wick after winning his first race at Iowa Speedway in June.