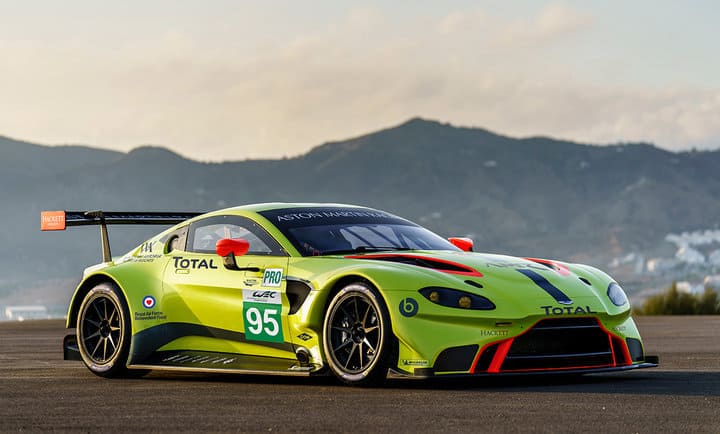 On Tuesday, Aston Martin launched their new Vantage model, the first revamp for the car since 2005.  Later in the day, Aston Martin Racing unveiled the new Aston Martin Vantage GTE racer. This new car will compete full-time in the FIA World Endurance Championship’s GTE-Pro class starting at Spa in May.

In addition, AMR announced that they are retaining their GTE-Pro driver lineups from 2017.  That means that Nicki Thiim and Marco Sørensen will remain in the No. 95 (pictured above), while Jonny Adam and Darren Turner will drive the No. 97.  Alex Lynn, who drove for G-Drive Racing in LMP2 and was part of Wayne Taylor Racing for their victories at Daytona and Sebring, has also been hired.  It is unclear what Lynn’s role will be with the team.

Team officials are very pleased about the new Vantage.

“Designing and developing this new car has been an extremely satisfying process,” said Dan Sayers, Aston Martin Racing’s Technical Director.  “We’ve collaborated closely with the Aston Martin’s Gaydon headquarters to develop the road and race cars in parallel. Attention to detail has been a priority at every step of this process and we’ve made big improvements in each area of the car. We’ve spent every second optimizing the design right until the build of our test car, which has paid dividends during our current testing schedule. This project has been one of the most intensive but also rewarding of my career so far.”

Sayers’ statement sounds a little familiar.  Aston Martin has used a similar process in working on the street and racing versions of their Vantage that Toyota used when designing the 2018 Camry.  Both the road car and the Monster Energy NASCAR Cup Series entry were launched together last year.

The Vantage GTE replaces the current V8 Vantage that has raced since 2012.  The car has 36 major victories, including two class wins at Le Mans.  In the United States, the car has had limited time outside of the WEC rounds at Circuit of the Americas.  The team did enter the Rolex 24 at Daytona in 2015, but finished 26th overall, 93 laps behind the class-winning Chevrolet Corvette C7.R.

Absolutely gorgeous car. Lets hope that its performance matches its looks. It will be hard to surpass the record of its predecessor and to even match it will be an accomplishment.
The WEC looks set to continue to provide exciting racing across the board.