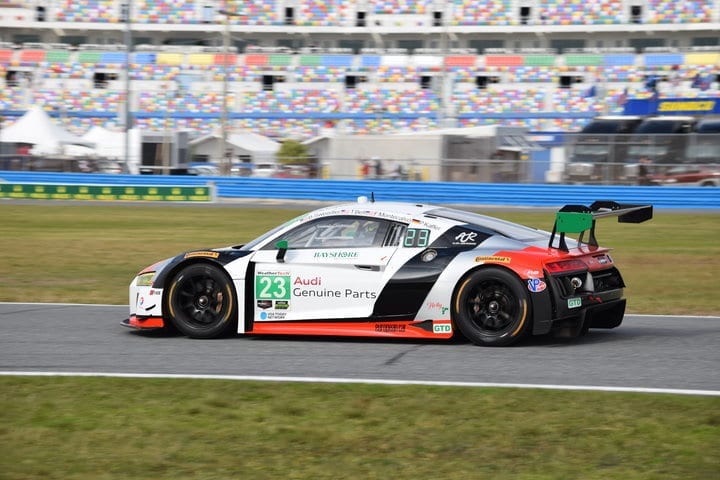 On Wednesday, Alex Job Racing announced that they will no longer race in the IMSA WeatherTech SportsCar Championship (or any other series), effective immediately.  Team owner Alex Job will focus on a historic restoration business that already operated in parallel with the race team.

Job is very proud of his career in motorsports.

“We have had a great run in professional racing,” Job said in a press release.  “Together with my wife Holly, we built a close-knit racing team from basically our garage at home.  We went from running a Porsche 911 in SCCA enduros to winning the 12 Hours of Sebring 10 times as both a Porsche factory team and independent operation.  A great line-up of drivers have driven our cars to wins at Le Mans and Daytona, all backed-up by a great team of mechanics who really became our extended family over the years.”

Alex Job Racing has competed in sports car racing for 28 years.  In that time, the team has over 70 class victories.  They claimed three consecutive GT championships in the American Le Mans Series (2002-2004), the first two coming with the duo of Lucas Luhr and Sascha Maassen.  The 2004 title came with current WEC World Champion Timo Bernhard.  During that time period, AJR was likely the best GT team in the world.  Of 29 ALMS races from 2002-2004, AJR won 24 of them.  In addition, the team won the last two ALMS GTC titles (Cooper MacNeil solo in 2012, while Jeroen Bleekemolen joined MacNeil in 2013).

The team switched to the Grand-Am Rolex Sports Car Series in 2006, running a Daytona Prototype (originally a Crawford, then a Riley) with Porsche.  The team claimed three overall victories during their time there before switching back to ALMS.  They also claimed a one-off GT class victory in the 2013 Rolex 24 at Daytona, the first Grand-Am victory for the Audi R8 LMS.  That win was accomplished with Dion von Moltke driving with Audi factory racers Filipe Albuquerque, Oliver Jarvis and Edoardo Mortara.

Post-merger, AJR has fielded entries in the IMSA WeatherTech SportsCar Championship’s GT Daytona class.  For the first three years, the team ran two Porsches.  The No. 22 ran under the WeatherTech Racing banner, a continuation of their successful GTC team in ALMS.  However, disatisfaction with Porsche 911 GT3 R Balance of Performance led WeatherTech Racing to leave IMSA in the middle of 2016.  The team ultimately finished the season in Pirelli World Challenge before MacNeil and WeatherTech left for Riley Motorsports.  The No. 23 ran under the banner of AJR-Team Seattle in order to benefit the Seattle’s Childrens Hospital.  2017 saw the team switch to Audi and run part-time with Townsend Bell, Bill Sweedler, Frankie Montecalvo and Pierre Kaffer.

Seems like a smart move. The vintage restoration business is certainly attractive, like everything assuming you can get the clients.