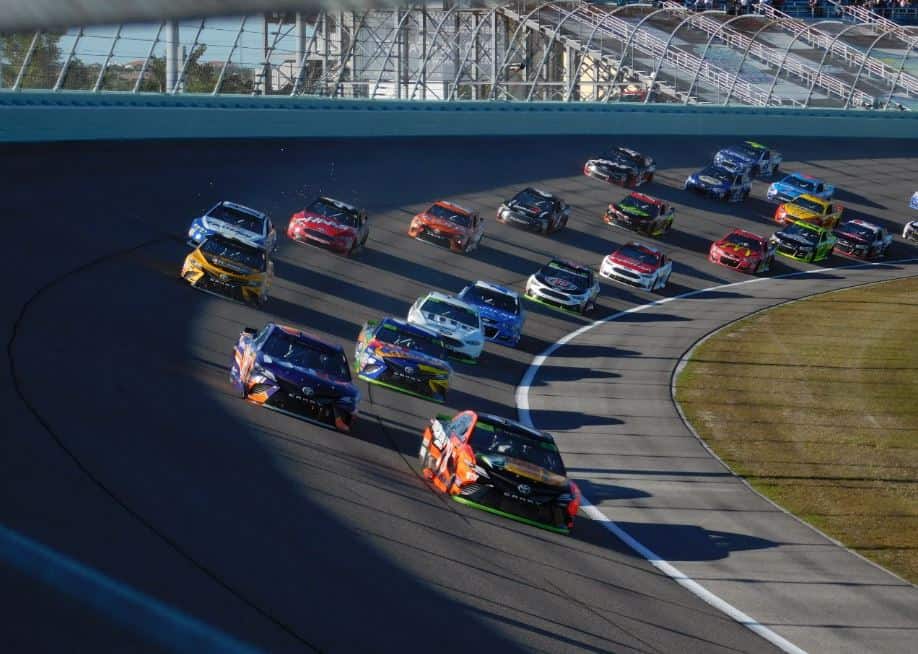 On Wednesday morning, NASCAR announced new cuts in the number of team personnel that can be brought to the track on a weekly basis in 2018.  The most notable change to race fans will a cut in crewmembers that can go over the wall on pit stops from six to five for all three of NASCAR’s National Series.  However, unlike the last cut from seven to six, NASCAR has allowed the teams to determine what would be the best mix of five crewmen.

In addition, the gas man can only put fuel into the car.  Previously, the gas man could also make adjustments (Ex: adding or subtracting wedge from the car).

Finally, in an attempt to give those on the teams their proper due, NASCAR will assign numbers or letters to all rostered team members to identify their duties.  As a result, team members will wear armbands that will identify their roles.  Previously, NASCAR allowed teams to put last names on the back of uniforms worn by over-the-wall crews when fire suits and helmets were mandated for 2002.

“Those are superstars as well in our industry,” O’Donnell said.  “The more we can allow fans inside that window and the media, candidly, to have you handed a roster prior to the race weekend opening up to know who’s on each team and what role they’re going to play for that weekend.

On the organization side, NASCAR will allow Cup teams to have three (for one or two car team) or four (for three or four teams) members of the team present.  These members include the competition director, team manager, IT experts, and a technical director.  For XFINITY and Camping World Truck Series teams, they can only have one organizational member on-site.  This number likely does not include team owners.

There are also new limits on members of the Road Crew on-site.  As per NASCAR’s release, this includes the crew chief, car chief, mechanics, engine tuner, any specialist for a part of the car and spotters.  For Monster Energy NASCAR Cup Series teams, they can have 12 Road Crew members.  XFINITY teams can have seven, while Camping World Truck Series teams can have only six.

There are exceptions to the Road Crew limits.  For Cup teams, they can have a 13th member at Indianapolis and the three road courses on the schedule.  XFINITY teams get an additional member for 10 races, while Truck teams get one extra person for five.  Like the pit crew rules, this is open, so teams can mix and match.  Also, every selection will be made public and posted for fans and media to make note of.

This is like your house being on fire and you’re out trimming hedges.
Another make it look like we’re doing something initiative to deflect attention from the fact ratings for Game 7/Dale Jr’s Official Retirement were down almost 20% from last year.

More rules, more regulations, more control. What few fans are left need something else to try and keep track of. Keep it up, NASCARISC.

Probably the most visible of the efforts to cut costs so far. I expect that shortening the race weekends at all races to be next. Daytona probably the only exception.

With all the available excess seating, those unemployed can now enjoy the race in the stands…..just another great idea, thank GOD those Team Charters have grown in value.

Brian will make them pay for their tickets.

It’s not excess seating. It’s just fans consuming the product in a different way that none of us are brilliant enough to understand or see. Just like the ratings that aren’t really down.

But at least the 250 people on hand at an Xfinity race will have a pit crew roster to take home as a souvenir.

The first of the changes that Brian is making in 2018 because the fans want them. It was in a survey Brian saw.

If NASCAR really wanted to cut costs, they’d require the teams to back to factory blocks and heads. Why does each team need acres and acres of CNC machines to manufacture every part when Ford, Chevrolet, and Toyota make them every day. Perhaps it would slow the cars down some, which means some of the exterior aero do-dads could be eliminated. Might actually resemble a street car again. There’s no telling how much could be saved just by going back to stock shocks. Another reasonable way to reduce costs. Why are we requiring computer screens in the cars, as well as allowing a track bar adjuster inside the car? Go back to a set of gauges and eliminate this track bar adjustment gig. Let the team be a part of the team.

I thought NASCAR called this a team sport. Why does the driver have to be the only factor? Let the teams figure out spoiler height, rear end gear ratios, and spring rates for themselves. If a team figures it out, then good. We might actually have some passing again.

Yaaawn. This will fix everything.