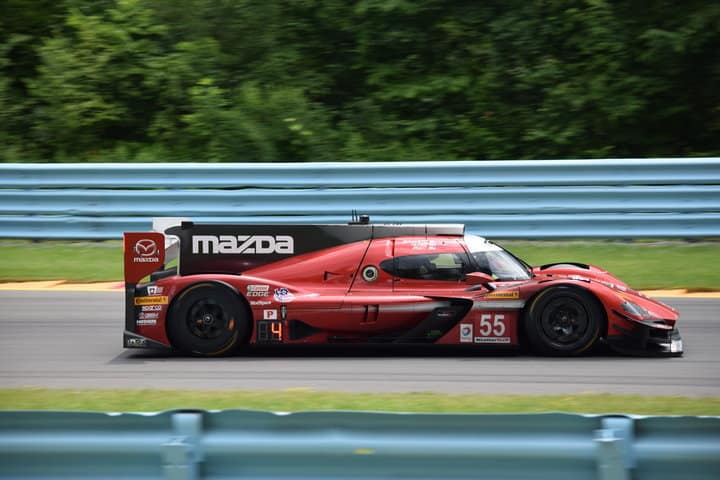 At the LA Auto Show on Tuesday, Mazda unveiled the six drivers that will wheel the new generation Mazda RT24-P in the 2018 IMSA WeatherTech SportsCar Championship for Mazda Team Joest.  The squad will be a mix of new and returning drivers.

Jonathan Bomarito and Tristan Nunez, who shared the No. 55 pictured above in 2017, will return to the team.  They will be joined by two new drivers to the organization.  They are Oliver Jarvis and Harry Tincknell.  For the Tequila Patron North American Endurance Cup, these drivers will be joined by the returning Spencer Pigot and defending DTM champion René Rast.  Mazda did not announce the actual driving lineups for 2018, just the actual drivers.

Bomarito is happy to stay under the Mazda umbrella.

“Whether you’re a young driver or an accomplished driver, the dream is to align yourself with a manufacturer,” Bomarito stated.  “So, I can check that box with Mazda. Second, it’s best to be with a good manufacturer, and I check that box with Mazda. Look at their involvement in motorsports history. It’s a really hard industry to find stability, so I’m glad to be with one of the heavy hitters in IMSA. And now, to be aligned with a team like Joest and their history with the sport, it’s great. Their experience, their professionalism and attention to detail is already showing. It’s huge for any driver to be with Mazda Team Joest and I’m proud to be one of them. I’m looking forward to 2018. I think we’re going to have some big improvement and it’s a very exciting time.”

Rast also brings previous knowledge of Team Joest to the team, although in a much more limited amount.  Rast raced the Audi R18 e-tron quattro for Audi Sport Team Joest in two races back in 2015 (Spa and Le Mans).  Rast’s best finish was a fourth at Spa.  Overall, Rast has been under the Audi umbrella for the last five years in various series, including his championship DTM campaign for Audi Sport Team Rosberg.

Tincknell has spent the last two years racing for Ford Chip Ganassi Racing UK in the FIA World Endurance Championship.  Sharing the No. 67 Ford GT with Andy Priaulx, Tincknell has earned four class victories and finished third in GTE-Pro points in 2017.  With the WEC shifting to a winter-based “Super Series” next year, Tincknell will run full-time in both the IMSA WeatherTech SportsCar Championship and the WEC.

Tincknell previously competed with Jota Sport for three years in a combination of the WEC and the European Le Mans Series in the LMP2 class.  Tincknell won the 2016 ELMS LMP2 Championship in a Gibson 015S-Nissan.  Tincknell also contributed to six class victories in that time.  The win total included a class win at the 24 Hours of Le Mans in 2014.

Tincknell is very happy to align himself with a second manufacturer for 2018.

“I am really honored to be able to race for Mazda Team Joest this season in the WeatherTech Championship,” Tincknell said.  “The whole Mazda team has put in so much effort and made a lot of progress in every area, and after my first test in the car I can’t wait to see how we get on at Daytona. The Mazda RT24-P has taken huge strides over the winter and I immediately felt comfortable in the car. I know the championship is very competitive and it will be a tough fight, but the spirit of the whole team is so determined and ready for it.”

Mazda Team Joest continues to develop the second-generation RT24-P (and by extension, the revised Riley Mk. 30 that it is based on) through a busy testing schedule.  The team will announce their official driver lineups at a later date.