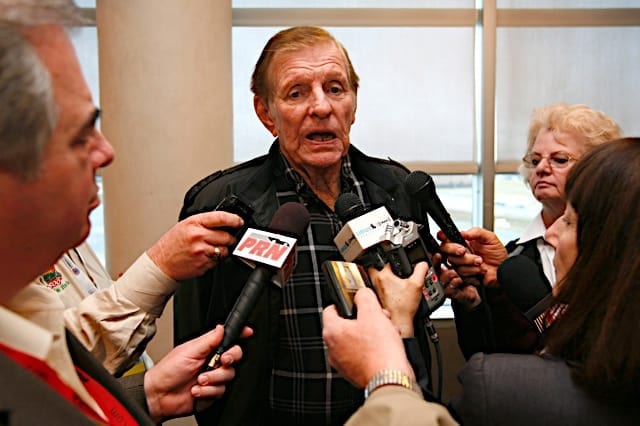 Walter “Bud” Moore Jr., a revolutionary part of NASCAR, has died at the age of 92. Moore won two championships as a car owner and crew chief in 1962 and 1963 with Joe Weatherly as an owner and in 1957 as a crew chief for Buck Baker.

Moore, a Spartanburg, S.C. native, had been the oldest living member of the NASCAR Hall of Fame. He was a member of the class of 2011.

Moore was part of D-Day on June 6, 1944. His unit was attached to General George W. Patton’s “Third Army,” which pushed to liberate Europe during WWII. Moore was decorated with five Purple Hearts and two Bronze Stars (the second with clusters).

Moore spent 37 years as a car owner in NASCAR’s premier division, featuring a list of multiple drivers, including Bobby Issac, Buddy Baker, Bobby Allison, Benny Parsons, Dale Earnhardt Sr., Ricky Rudd, Darrell Waltrip and many others. His last race as a team owner came in 2000 at Talladega with Ted Musgrave.

Services and arrangements will be announced at a later date.

Really saddened to hear of longtime #NASCAR owner Bud Moore’s passing. Owners of the early years of racing were a different breed, before helicopters and $1mm motorhomes and it really hurts every time we lose one.

Just heard the sad news about Bud Moore passing. What a true legend-Not only in racing but in life. War hero and life hero #ripBud

Saddened to hear that NASCAR pioneer and American hero Bud Moore has passed. The University of Racing holds his family, friends and fans in our thoughts…God Speed Bud… pic.twitter.com/hq4suozcs9

The passing of Bud Moore hurts my heart. Your Hero’s may disappear, but those memories never fade. Bud was larger than life to me. Johnson. The Woods, Inman, Harry Hyde, my family… I grew up side by side with Legends…our sport should NEVER forget these men, I won’t…@NASCAR

So sad to hear of the passing of Hall of Famer Bud Moore. He was a man’s man, an American hero and a NASCAR legend. RIP, Bud. pic.twitter.com/dLroHUIye0

Sad news to hear @NASCAR pioneer Bud Moore has passed. Great car owner but only learned recently that he was an American soldier at Normandy. May God rest his soul.

RIP and thank you for your service!!! Bud Moore – my friend pic.twitter.com/mw8g8EuBmu

Bud Moore. Another legend gone. He taught us a lot of life's lessons, like how to read a slide rule. RIP Walter. pic.twitter.com/A0SvpD7jUm

I drove for Bud Moore in 1973, only for a few races, we had very little success on the track but because good friends off the track, he was passionate about everything he did, he will be missed, R.I.P. my friend.

The entire Petty family sends their thoughts and prayers to the Moore family:

"Bud is forever a hero to our country for his exemplary service in World War II. He was also just as fierce of a competitor in the era we raced against him."- Richard Petty. pic.twitter.com/m2d4YErhOJ

The thing I like the most about being on the @NASCARHall voting panel is being able to meet and talk to heroes like Bud Moore. #RIPBud I will miss your stories.

Our thoughts go out to the family & friends of Bud Moore, a #NASCAR legend, @NASCARHall member and true American hero. https://t.co/ROQLwyznjS

Our thoughts and prayers go out to the family of Bud Moore. A true American hero. https://t.co/J6BOQwEDUn