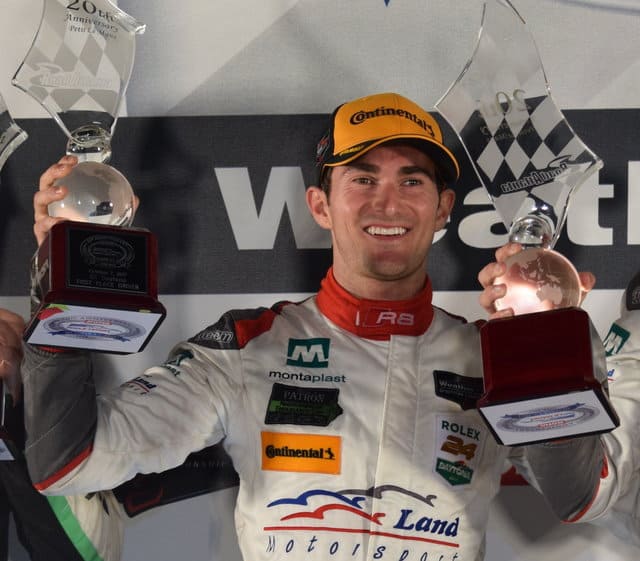 On Thursday, BMW Team RLL announced that Connor De Phillippi will drive full-time for the organization in the IMSA WeatherTech SportsCar Championship in 2018.  He will replace veteran Bill Auberlen, who will step back from full-time racing to become a Brand Ambassador for BMW of North America.  The 49-year old Auberlen will still race in the four Tequila Patron North American Endurance Cup events (Daytona, Sebring, Watkins Glen and Road Atlanta) in 2018.

De Phillippi is pleased to get the chance to race for BMW.

“To be part of the BMW family is something I am very proud of,” De Phillippi said in a press release.  “Driving for BMW Team RLL is quite an achievement for me and I hope I can add to the success of the team next year.”

De Phillippi has already had an opportunity to drive the team’s new BMW M8 GTE in a private test session at Homestead-Miami Speedway along with John Edwards and Martin Tomczyk.  Both drivers will be back with the team in 2018.

Even though De Phillippi is from San Clemente, Calif, he has spent the past few years racing full-time in Germany.  Most recently, De Phillippi has raced for Montaplast by Land-Motorsport full-time in ADAC GT Masters.  De Phillippi and teammate Christopher Mies won the championship in 2016 and finished third in points this season.

Finally, De Phillippi was part of Montaplast by Land-Motorsport’s team that pulled out a quite unlikely overall victory in the 24 Hours Nürburgring in May.  An error with a fuel cap led to the team taking the time to fit rain tires.  That allowed Kelvin van der Linde to run down the leaders.

As for Auberlen, he’s looking forward to his new role.

“I am honored to have been asked to become a BMW NA Brand Ambassador and look forward to additional opportunities with BMW of North America,” Auberlen stated.  “First and foremost, I am a racing driver and am looking forward to four races with BMW Team RLL in 2018.  My goal remains to get to the top of the list in all-time North American sports car victories and I want that achievement to be shared with BMW.  We are only three wins away.  We have not yet determined what else I may be driving but every opportunity in a BMW racing car is a good one.”

Auberlen has been associated with BMW off and on since 1996.  He has driven everything for the manufacturer from E36 M3s to BMW’s V12 LMP back in the late 1990s.

BMW-Motorsport is set to make additional announcements about their racing programs at their annual season review banquet on Dec. 15.  At that point, the remainder of the team’s driver lineup will be revealed.