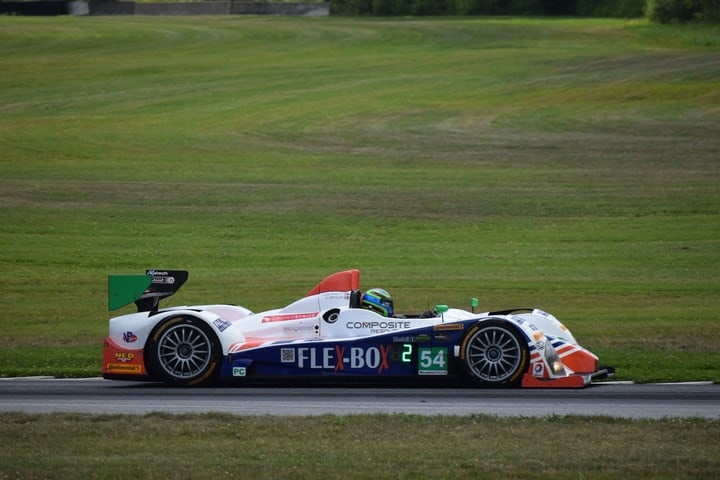 CORE autosport is moving up to the Prototype class in 2018.  In Daytona, they plan to make a big splash.  On Thursday, the Rock Hill, S.C.-based team announced that former LMP1 racers Loïc Duval and Romain Dumas will join full-time drivers Jon Bennett and Colin Braun in the No. 54 ORECA 07-Gibson at Daytona.

To Duval, racing at Daytona is important to him.

“Going to Daytona for a racing driver means a lot,” Duval said in a press release.  “It was good to be there.  The most impressive thing for me was the banking.  When you’re in those corners and you’ve never done an oval or anything like that, it’s impressive to see the angle you can take.”

Duval raced as an Audi factory racer in the FIA World Endurance Championship from 2012-2016 (part-time in 2012).  In that time, Duval had six victories, including the 2013 24 Hours of Le Mans.  He won the World Endurance Championship in 2013 along with now-retired teammates Tom Kristensen and Allan McNish.  Duval’s time with the team only came to an era due to Audi pulling out of the WEC at the end of 2016.

For 2017, Duval raced full-time in DTM for Audi Sport Team Phoenix.  A tough rookie season there saw Duval score one second-place finish at Zandvoort and finished 18th in points.

He also made one-off appearances in the WEC for G-Drive Racing and the IMSA WeatherTech SportsCar Championship for DragonSpeed.  Duval showed a fair amount of speed at Daytona in DragonSpeed’s ORECA 07-Gibson, but mechanical problems in the race resulted in the team failing to finish.  They were credited with a 10th-place finish in the Prototype class (39th overall).  The race marks Duval’s only career start in Daytona.

Dumas has much more experience at Daytona.  He has six previous starts in the Rolex 24 at Daytona with a best finish of third in class on two occasions.  Only one of those six starts actually came in a prototype (2009, for Team Penske in a Riley Mk. XX-Porsche). Regardless, Dumas is looking forward to his new endeavor.

“I’m really happy to go back to Daytona,” Dumas stated.  “For a long a time I’ve been looking to come back, but Dakar is always at the same time. This year, as soon as I get the opportunity with CORE [autosport], I decided not to do Dakar.

“I drove this car [ORECA 07-Gibson], this year at Le Mans with [Signatech Alpine Matmut] and at Spa.  I know it’s a very cool car.  I think its pace will be pretty good.  I know we have a lot of competition ahead of us.  First, we have to do our own race, without looking at everyone else, then the race will come to us if we are doing a good job.”

Dumas has spent the majority of his career as a factory driver with either Porsche or Audi.  He has three overall victories in the 24 Hours of Le Mans (2010, 2013 and 2016) and won the FIA World Endurance Championship in 2016 for Porsche Team.  However, Dumas was the odd man out in a driver shakeup at Porsche Team.  For 2017, Dumas ran the aforementioned races for Signatech Alpine Matmut (both fifth-place finishes in LMP2), while also winning the FIA R-GT Cup, a championship for GT cars in rallying.

Neither Dumas or Duval are scheduled to be in Daytona next week for an IMSA open test session.  Bennett and Braun will turn some laps in the new ORECA 07-Gibson.