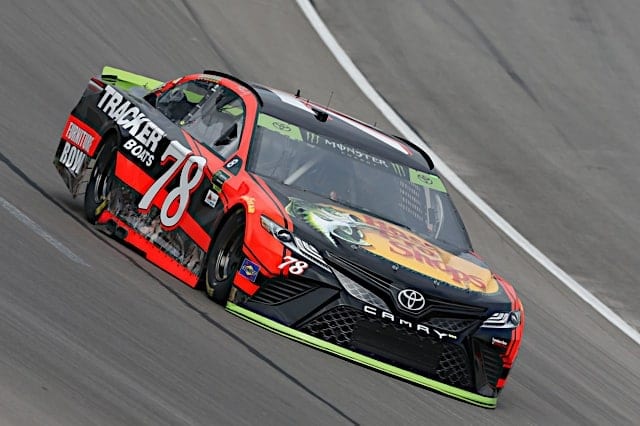 For Furniture Row Racing, the 2017 Monster Energy NASCAR Cup Series title was 13 years in the making.

That’s how long it’s taken for this team to evolve. It’s gone from a car that barely qualified for races, to “the little team that could,” to the best team in all of NASCAR. The pinnacle of those achievements came in the form of the 2017 MENCS championship with driver Martin Truex Jr.

David finally beat Goliath. What has been a single-car team for all but one year of its existence defeated the four-car superpowers of Hendrick Motorsports, Joe Gibbs Racing, and Stewart-Haas Racing. The three organizations listed had won 11 of the last 12 Cup titles prior to this season.

The only other team to break through during that span was Team Penske. But Penske, who commandeered Brad Keselowski’s 2012 Cup title, is no slouch. Despite being just a two-car operation at the time no car owned by Roger Penske can rightly be labeled an underdog.

NASCAR’s recent history, then makes FRR’s run to the title that much more impressive. The emergence of the No. 78 is likely the most surprising development since the late Alan Kulwicki’s AK Racing shocked the racing world back in 1992.

Like Kulwicki, Furniture Row Racing’s championship is not a fluke. The team worked extremely hard and made it through some trying times to get to this point.

It cannot be said enough how much the team overcame to become dominant in NASCAR.

For starters, it is the only team in MENCS that has its shop outside of North Carolina. Team owner Barney Visser’s companies, Furniture Row and Visser Precision, are headquartered in Denver, Colo. Visser wanted to be able to see his race team every day so he keeps his team close by, housed in a city far from any of the tracks on the circuit.

That means FRR has to fork out way more money for travel than any other race team. Anyone who wants to leave their current job and join FRR has to move more than halfway across the country. I imagine that makes it more difficult for them to snag personnel.

Then, there’s the matter of on-track speed. FRR has come a long ways since 2005 when it fielded Kenny Wallace and fellow Denver native Jerry Robertson in the No. 78. The fact that Robertson, a local modified racer who had no prior Cup experience, was Visser’s initial choice to pilot the car shows just how much of a grassroots movement FRR was.

In 2006, the team ran its first full season in Cup with Wallace as the primary driver. The No. 78 failed to qualify for 17 races that season, and again the following year. For newer fans, there was a time when more than 40 cars showed up to the track each week. Missed races led to no purse, thousands of dollars in losses for a company backed by its owner.

Despite the troubles, Visser continued to pour money into his team. The only sponsorship came from himself as the owner maintained an independent vision.

The team took a huge step in the right direction when it signed renowned qualifier Front Row Joe Nemechek to drive the car. The DNQ’s decreased significantly and Nemechek even won the team its first pole award in 2008.

But there were drawbacks. The recession forced a reduction to part-time competition with new driver Regan Smith in 2009. Two DNQs in 20 attempts followed in a year where the team posted an average finish of just 27.7.

It was a technical alliance with Richard Childress Racing in 2010 that turned on-track performance around. FRR became more competitive, building back to full-time competition.  A year later, in 2011 Smith pulled a surprise by charging to victory in Darlington’s Southern 500.

With the cars continuing to improve, Visser finally nabbed his first elite driver, picking up a “down-in-the-dumps” Kurt Busch for 2013. Busch got the team into the NASCAR playoffs for the first time ever and completely rejuvenated his career in the process.

When Busch moved on, it opened the door for Truex to join the team. Truex, like Busch, was a bit of a risk. His ride at Michael Waltrip Racing evaporated after an intentional spin by teammate Clint Bowyer at Richmond was unmasked as a scheme to get him into the playoffs.

The first year together for both sides was rough; Truex led just one lap all season. But towards the end of that year, the No. 78 added Cole Pearn as crew chief. The chemistry and knowledge Pearn brought to the program was evident almost instantly, according to Truex.

“I remember Cole specifically, like looking at me and having this look like, damn, I think this guy actually knows what he’s talking about,” he said at Homestead.  “That was it right there.  That was like the switch that flipped, and me and him could see eye to eye, and he bought into what I was saying, I bought into what he was saying.

“When they made him the crew chief in 2015, he went from being this guy behind the scenes that was really quiet to this is my team, I’m going to run it the way I think I need to, and the rest is history.”

In 2015, Truex made it back into Victory Lane and the pair made it to the Championship Four. The No. 78 had clawed back toward a level they were at in 2013 with Busch.

However, there was still one piece of the puzzle to go to make this team complete: strong support from a manufacturer. When FRR switched from Chevrolet to Toyota at the start of 2016, that partnership came to pass. The team swapped its technical alliance to Gibbs and relied heavily on their engineering support.

Now, FRR is taking the same parts and technology that Gibbs uses and performing better than the powerhouse themselves. Truex, by himself, won just as many races last season (eight) as JGR as a whole.

It’s just the latest example for FRR in how they take advantage of opportunities. Whatever someone gives them, in terms of equipment or support, they make it even better. It outperformed JGR just as it had started outperforming Childress prior to the switch. It has taken drivers that no one wanted anymore and turned them into championship contenders. It took an unideal location and made it into the home of one of America’s greatest race teams.

Despite those drawbacks, I firmly believe this team would have failed without Visser involved in day-to-day operations. In racing, unlike in other sports, any time an owner is just the person who writes the checks from afar, that team fails. Just look at how it went for Red Bull Racing and George Gillett Jr. There have been a plethora of other teams that have come and gone since the inception of FRR.

Visser put nearly everything he had into this team with hopes that it would succeed, and it finally has.

FRR will again be a contender in 2018, but several challenges lie ahead. I doubt that Gibbs will give Visser’s team the same type of high-quality information next year after getting shown up nearly every week. Also, Gibbs helped Furniture Row more last season because it had JGR driver Erik Jones on loan in a second car. Now that Jones has moved over to Gibbs, expect communication to dry up a bit.

Losing Jones and the second car will hurt the team. But it saves face in that it got to keep Jones’ sponsor, 5-Hour Energy. The team was fortunate that it signed the energy drink prior to Monster Energy becoming the Cup title sponsor. Monster will not allow other energy drinks at the Cup level, but 5-Hour is grandfathered in. However, the energy drink has to stay with FRR and cannot move with Jones to Gibbs.

That means the company will instead become a sponsor for Truex. The combination of 5-Hour, Bass Pro Shops and Auto Owners’ Insurance means the No. 78 will have a full season of sponsorship and will not have to put Furniture Row on the hood for the first time ever. Visser will no longer have to fund the car with his own company’s money, something he used to have to do every single weekend.

FRR’s journey to the top of NASCAR has been an exciting one to follow. In fact, the team has become the reference point and inspiration to all of the small cars out there trying to climb up the ladder in the sport.

Their journey, while a long one, has reminded all current and potential NASCAR owners it can still be done. Will their rise start a new trend?

CALDWELL: Monster Energy Climbs On Board As Title Sponsor

LADNER: Tumbling NASCAR TV Ratings – Are They A Cause For Concern?