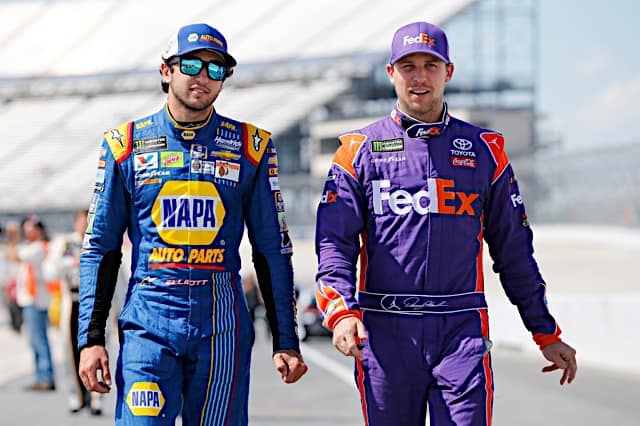 Denny Hamlin loves Martinsville. For well over a decade, Martinsville returned the favor. The native Virginian has thrived at his hometown track, winning a career-high five times while earning a 10.0 average finish. Hamlin’s most serious championship bid was built on this half-mile, paperclip-shaped oval: a 2010 season sweep to the delight of the fan base. Surely, young Chase Elliott couldn’t make a dent in that reputation.

But on one crisp Fall day at the track, the two made contact and the unthinkable happened. Hamlin, the hometown boy, took the checkered flag to a chorus of boos.

That moment, speaking to the rising power of young Elliott also sparked a much-needed NASCAR rivalry, a “Boys, Have At It” when boys haven’t been doing much of anything. Sure, there’s been a few spats in recent years: Kyle Busch–Brad Keselowski, Busch-Joey Logano, and Logano-Matt Kenseth, to name a few. But none of them have captivated the fan base long-term. For a hot second, they dominate the NASCAR news feed before fading into the background.

Elliott – Hamlin feels different. Both men are young enough (22 and 37, respectively) that they’ll be battling for years to come. Each driver is part of a top-tier team for two warring manufacturers (Chevy and Toyota). Like Busch-Keselowski, they have a powerful presence on social media.

But unlike Busch and Keselowski, whose power may have leveled off Elliott’s pull is just beginning. The youngster sparked more cheers at Talladega this fall assuming the lead than retiring Dale Earnhardt Jr. The son of a former NASCAR Most Popular Driver, Bill Elliott, has earned an instant connection with the fan base.

Elliott’s gained over 300,000 Twitter followers this year, more than any returning wheelman not named Jimmie Johnson. His friendships with fellow youngsters like Ryan Blaney form the core of NASCAR’s next generation. A few victories would put him on the verge of stardom with Hendrick Motorsports, the New York Yankees of the Cup Series.

But what Elliott was missing to make that jump, besides a trip to Victory Lane was a chance to show some anger. Every good guy needs a foil; every racer needs to show he won’t be punched in the mouth without retaliating. After a number of near-misses in his first two seasons, where Elliott failed to close the deal Hamlin’s late-race bump at Martinsville provided that opportunity.

For the first time, we got to witness Chase Elliott mad.

That moment, witnessed by millions and viewed by tens of thousands on YouTube, was the most memorable in the 2017 NASCAR Playoff. (Sorry, Martin Truex Jr.; as much as I love your Cinderella story, it just did not catch fire with the fan base). Elliott’s “return the favor” moment at Phoenix, causing Hamlin to have a flat, proved just as captivating.

Suddenly, this 22-year-old showed he’s going to stand up for himself. Hamlin, known for his emotion played right into it, from his public apology on Twitter right through to his Phoenix frustration. Both men’s public profile got elevated in an age where casual sports fans are struggling to name full-time NASCAR drivers that haven’t retired.

Even the fans themselves got into the act. We had one curse out Hamlin on pit road, needing to be restrained while Twitter lit up, abuzz with opinions. That’s the upside of drama in this sport: raw emotion causes Monday morning water cooler conversation. It’s what Dale Earnhardt mastered during his time intimidating opponents throughout the 1990s. You loved Earnhardt or you hated him, but as a fan, you felt something. Getting people to feel that strongly again is a challenge NASCAR is eager to take on.

The question now is whether this rivalry can endure. Elliott surged during the playoffs but ultimately fell short of the Championship 4; can he break through next year while winning multiple races? Hamlin, whose emotional streak has its own brand of popularity, often plays second fiddle to Kyle Busch at Joe Gibbs Racing. Can multiple wins elevate him back into the spotlight over the No. 18 and new teammate Erik Jones?

Their battle, in particular on the short tracks, is crucial for NASCAR to find its footing in a post-Earnhardt world. It’s a chance for Elliott, already connected to the sport’s southern roots, to firm them up while growing as a budding superstar with national appeal.

LADNER: Tumbling TV Ratings… Again. Still A Cause For Concern?

Elliott is certainly a star on the rise, but don’t try to force Hamlin into the same role. Hamlin has always been second fiddle at JGR and he will never be anything more. Kyle Busch is JGR’s star for as long as he wants to be. Busch is the lightning rod, the once and probably future champion and the certain HOF driver when he waltzes in with his 200+ touring series wins, including well over 50 at the Cup level. Busch has been in the Top Ten of MPD voting every year he has been in the sport, while Denny has NEVER been in the Top Ten. Kyle has managed to be the most-hated driver at the same time he has grown an enormous fan base of his own. Meanwhile, Denny may be having to share the hate due to his run-in with Elliott, but he has failed to capture the “good side of being bad,” like his more famous teammate. Plus Denny is 5 years older than Busch and is now on the downside of his own career.

Oh yeah, we loved the fire we saw in Chase, but the benefits look one-sided. Denny needs to worry more about having a ride in 2019 when Christopher Bell issues his own ultimatum to Joe Gibbs, than he needs to concern himself with a completely unequal rivalry with a kid who is already beloved by the majority of fans.