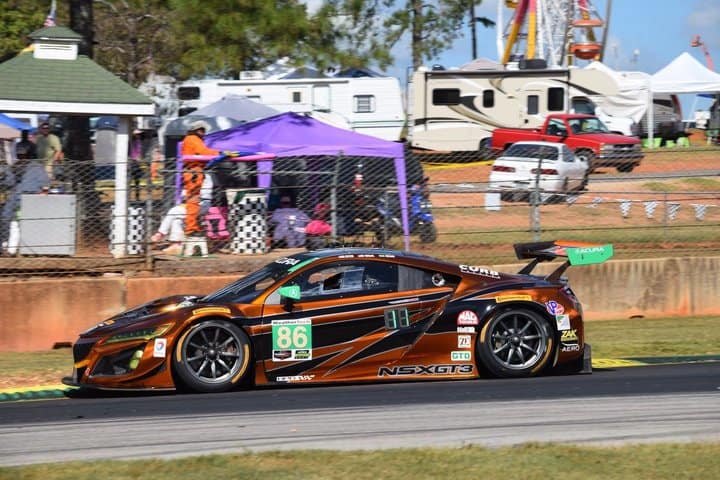 On Friday morning, Michael Shank Racing announced two separate racing programs for the 2018 season at the PRI Trade Show in Indianapolis.  For the Verizon IndyCar Series, the team announced a part-time effort in partnership with Schmidt Peterson Motorsports.  Meanwhile, the team’s two-car program in the IMSA WeatherTech SportsCar Championship with Acura will continue as well.

Jack Harvey, who drove for the team in association with Andretti Autosport in the 101st Running of the Indianapolis 500, will be back with the team for a four-race schedule at minimum.  Primary sponsorship will once again be provided by AutoNation and SiriusXM for the Honda-powered Dallara.  Unlike at Indianapolis, the team will use No. 60, a number that has significant history with Michael Shank Racing in IMSA and Grand-AM.  At present, Harvey is scheduled to race at St. Petersburg, Long Beach, Indianapolis and Sonoma.

Harvey is pleased to get another chance with Michael Shank Racing in the Verizon IndyCar Series.

“I’m absolutely thrilled for this to come together and for everything to be moving forward,” Harvey said.  “I had a very positive experience racing for [Michael] Shank in the Indianapolis 500, and it was great to build on that with SPM in the last two races of the year.  Now to be racing for Mike and to also have the support of SPM for this program, it is the best of both worlds for me.  I want to do as well as we possibly can for AutoNation and SiriusXM, and I cannot wait for St. Pete to get here.”

Harvey’s series debut came at Indianapolis.  Unfortunately, it ended after 65 laps after Harvey ran over debris from Conor Daly‘s crash.  The resulting spin into the inside wall left Harvey with a 31st-place finish.

Harvey ended up finishing the 2017 Verizon IndyCar Series season at Schmidt Peterson Motorsports, replacing Sebastian Saavedra in the No. 7.  Harvey finished 14th at Watkins Glen and 18th at Sonoma.

On the IMSA side, Michael Shank Racing’s deal with Acura to run as a factory operation was (by rule) only for the 2017 season.  For 2018, the team will race as a privateer operation full-time in the IMSA WeatherTech SportsCar Championship.

As a result of the factory backing ending, both cars will have completely different driver lineups.  The No. 93 Acura will have Lawson Aschenbach and Justin Marks drive full-time.  Aschenbach comes to the team from the now-shuttered Stevenson Motorsports, while Marks raced part-time for Turner Motorsport in 2017.  In addition, Marks made one appearance in the Monster Energy NASCAR Cup Series at Talladega in October and two starts in the XFINITY Series.

Aschenbach is very pleased to race for the Ohio-based Shank team in 2018.

“I’m extremely excited to be joining Michael Shank Racing in 2018,” Aschenbach stated.  “This team has the professionalism and dedication needed for success. From top to bottom you can see that everyone has a common goal, and that is to win. This is the type of environment that drivers dream about.  It’s going to be fun teaming up with my buddy Justin Marks.  He’s a great friend and we are both excited to be pushing for podiums and wins with Michael Shank Racing and the Acura NSX GT3.”

For the Tequila Patron North American Endurance Cup races, Aschenbach and Marks will be joined by veteran racer Mario Farnbacher, who had a similar role in Riley Motorsports’ No. 33 Mercedes-AMG GT3 in 2017.  The Rolex 24 at Daytona lineup will be filled out by Monster Energy NASCAR Cup Series regular AJ Allmendinger, who is effectively Michael Shank’s trump card for Daytona.  It will be Allmendinger’s 12th Rolex 24 with the team dating back to 2006.  In 2012, Allmendinger was part of the team that won the Rolex 24 at Daytona overall for Michael Shank Racing with Oswaldo Negri Jr., John Pew and the late Justin Wilson.

In the No. 86 Acura (pictured above from Road Atlanta), the full lineup is still up in the air.  However, the team did announce two drivers that will drive the car in the Tequila Patron North American Endurance Cup races.  One is Katherine Legge, the only driver out of eight that competed with the team in 2017 that will return in any capacity.  Legge shared the No. 93 Acura with Andy Lally in 2017, claiming class victories at Detroit and Watkins Glen on her way to sixth in points.  The other confirmed driver is 2016 Pirelli World Challenge GT champion Àlvaro Parente, who will make his IMSA WeatherTech SportsCar Championship debut at Daytona.

For Legge, she’s happy to continue with Michael Shank Racing.

“I am really excited to be joining Michael Shank Racing for another season,” Legge stated.  “We had a lot of success last year especially with it being the first season for the Acura NSX GT3.  Bringing home two wins last year definitely made me want to achieve more of that for this year.  I think Àlvaro [Parente] and I will be a great pairing and hopefully we can achieve even more this year in the endurance events.”

Michael Shank Racing has indicated that a future announcement will be made in early January to fill out the driving lineup of the No. 86 Acura.  Look for that to come just before the Roar Before the 24.