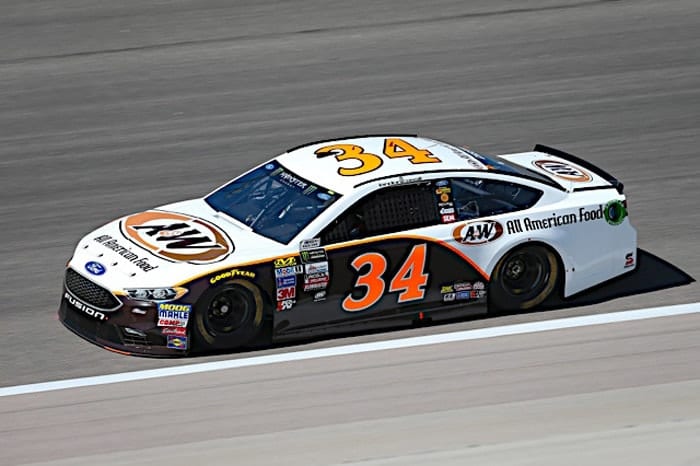 For Front Row Motorsports, 2017 was a year of change.  Landon Cassill shifted from the No. 38 to the No. 34 to replace Chris Buescher, who moved to JTG-Daugherty Racing, while David Ragan returned to the team after a few years away to drive the No. 38.

Overall, the team was a little weaker in 2017 as compared to 2016, but the stats make the drop-off look worse than it actually was.  Buescher’s victory at Pocono Raceway vaulted him into the Chase in 2016, but having the worst performance in the Chase left Buescher 16th in the final standings. In terms of overall points accumulated throughout the season, he was really 28th in points for the season, just ahead of Cassill.

However, compared to 2016, Cassill’s 2017 season was a bit of a disappointment.  Points-wise, he dropped from 29th to 31st in the standings.  The main reason for the drop?  DNFs.  Cassill had only one DNF in 2016, but in 2017, he had six.  Four of them were due to crashes, while his DNF at Indianapolis Motor Speedway was a NASCAR-ordered parking during the final red flag.  The sixth DNF was a transmission failure at Talladega Superspeedway in May.

Those DNFs were clearly why Cassill regressed in the points.  Even with the DNFs, Cassill’s average finish was only two tenths of a position worse than in 2016, which itself was Cassill’s best season in Cup in regards to average finish.

That average finish of 26.3 in 2016 came with seven top-20 finishes and a best run of 11th at Talladega.  Cassill had only three top 20 finishes all season, with a best of 16th in the Daytona 500.  Two of the top-20 finishes came in plate races.  Only the 20th-place finish at Chicagoland Speedway was on an unrestricted track.

Aside from the crash at Talladega, Cassill ran quite solidly during the playoffs in 2017. Most everyone involved was focused on the championship contenders, but Cassill spent the final 10 races steadying a rather shaky season.  Over those final 10 races, Cassill moved up from 33rd to 31st in the standings with seven top-25 finishes, the best of those runs a 20th-place finish at Chicagoland Speedway.

Wow! A girl! Well worth the wait. Daphne Plum Mayola Cassill. Healthy and hungry. Beckham retains his title. This trumps everything else pic.twitter.com/8hVdGkR8nI

Outside of the car, Cassill’s social media profile has continued to spread.  2016 saw Cassill publicize the “38…Nice” catchphrase and work that into a limited series of T-shirts featuring sponsor Snap Fitness on a Ford Festiva. In 2017 came the spread of what amounted to a “Where’s Landon” scavenger hunt at various Love’s Travel Stop locations via Twitter.  Even other drivers got in on the game.

First fuel stop of the day. Looking for @landoncassill pic.twitter.com/5DqYIMi60h

While Love’s Travel Stops definitely liked working with Cassill, it probably could have taken this and run with it even more.  Maybe it could have had Cassill show up unannounced in places like Canaan, N.Y., (where there actually is a Love’s location) and give people free gas or something.  He’d be game.  Plus, Cassill would have been able to expand his reach, and we’re talking about a team that has raced a Where’s Waldo? paint scheme in the past, so Front Row would have been behind it big time.

Meanwhile, for Ragan, returning to Front Row Motorsports was a step up from BK Racing.  Back in familiar surroundings after nearly two full seasons away, Ragan put up Front Row’s best finishes of the season.  Given Ragan’s background, it’s unsurprising that they were in restrictor plate races.

Ragan’s best finish was sixth in the Coke Zero 400 at Daytona in July.  That result was buoyed with 10th-place finishes in both races at Talladega.

Compared to Cassill, Ragan’s best runs were better, but he was more inconsistent as a whole.  A good top-20 finish might have been followed up by a race where he finished closer to 30th.

There was also a fair amount of bad luck to go around.  Ragan had four DNFs, all due to wrecks.  Phoenix International Raceway in March was the first of those, caused by a cut left rear tire while racing for the Lucky Dog.

Overall, Ragan moved up three places in the points from 33rd to 30th, best of the Front Row Motorsports Fords.  He was generally much more competitive, although just being in a less chaotic environment likely played a role there.

Away from the track, there wasn’t all that much that went on in the life of Ragan.  However, he did embrace his inner race fan and had an old Unocal 76 ball installed on his property.

@DavidRagan thank you for choosing us for the install of this classic sign. Great job @Nick_Denton. pic.twitter.com/DSQLJd0AZd

Be honest.  If you had the funds and the land to do it, there’s a good chance that some of you would do the same thing.

Front Row Motorsports’ driver lineup is currently undecided for 2018.  Cassill was informed in October that he will not be back with the team as it looks to make “radical changes.”  As of this writing, Cassill has not inked any deal for the 2018 season and is looking for rides with Cup, XFINITY or Truck teams.

Michael McDowell, who left Leavine Family Racing at the end of the season, is said to be a contender for the No. 34 seat.

The No. 38 ride is also up in the air, but for what it’s worth, Ragan said he thinks that he’ll be back for another year.

With a number of free agents still out there, Front Row Motorsports is in position to potentially a splash in the offseason.  Sponsorship is always going to be a question, though.  Effectively no sponsorship for either car was locked in beyond the end of 2017.  Jenkins has personal businesses that he can put on his cars, but that’s far from ideal.

More than likely, a few of the team’s sponsors will return in 2018.  Problem is, none have been announced as returning up to this point.

In addition, there is the ongoing distraction of legal issues surrounding a charter.  The team’s existing charters for the Nos. 34 and 38 are fine.  However, the team had designs at one point of expanding back to three cars for 2018.  That likely won’t happen now, but the team planned ahead by buying the charter for BK Racing’s No. 83 prior to the 2017 season.  That charter was then leased to TriStar Motorsports for its No. 72.  That’s why the No. 83 ran as an open team.

However, the legality of the purchase is in question because BK Racing apparently put the charter up as part of its collateral for a loan from Union Bank & Trust in Virginia.  Legal proceedings are ongoing.

Front Row Motorsports tends to announce its sponsorship deals a little later than most teams.  For example, its 18-race sponsorship for last season with Love’s Travel Stops was announced during the NASCAR Media Tour in January.  A number of smaller sponsorships were inked during the season, such as the deal with Overton’s to sponsor the No. 38.  Both Cassill and Ragan were confirmed in their rides for 2017 in mid-December.

Momentum-wise, it’s a little hard to tell where the team is actually going until it get its sponsorship and driver details nailed down.  However, the team finished 2017 relatively strong.  That’s something to hang their hats on.  Once everything gets finalized, the goal will be to keep that momentum going.