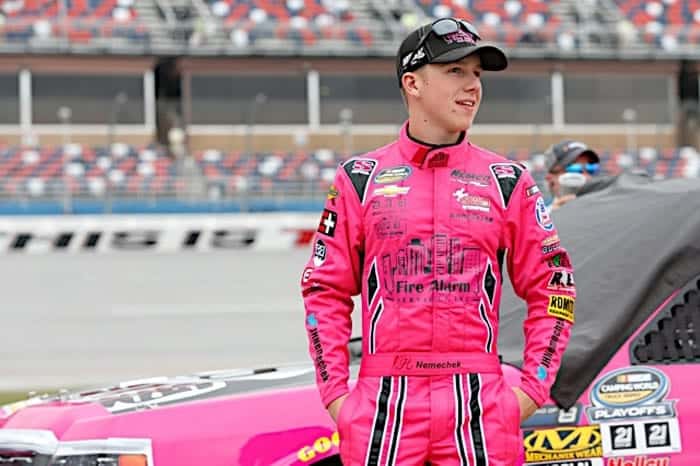 John Hunter Nemechek will no longer be a full-time NASCAR Camping World Truck Series competitor. Instead, the five-time Truck Series winner is moving up in 2018 to the XFINITY Series.

Chip Gannasi Racing is adding the North Carolina native to its driver lineup next year. The move will mark the first time he has participated in a NASCAR-sanctioned race in one of the top three divisions with a team other than NEMCO Motorsports.

“In years past, I’ve been able to show what we’ve done with a small organization, kind of underfunded, at NEMCO Motorsports in the Truck Series and I think it’s going to be a great opportunity to get in really good equipment that has been proven to win each and every year,” Nemechek told NASCAR.com.

Fire Alarm Services will continue its relationship with Nemechek, sponsoring him in a part-time effort.

The status of Brennan Poole, who piloted the No. 48 car for CGR the past two years, is still unknown. He is rumored to be moving up to the Cup Series next year with Richard Childress Racing, but nothing official has been announced.

CGR is expected to scale back to one full-time XFINITY Series effort next year, with the focus heading to the car that is split between Nemechek and Larson.

NEMCO Motorsports, owned by Joe Nemechek, will remain open. The team is currently looking for potential partners and drivers to come on board for the 2018 season.

There are more deserving drivers out there than him,but I guess money talks.