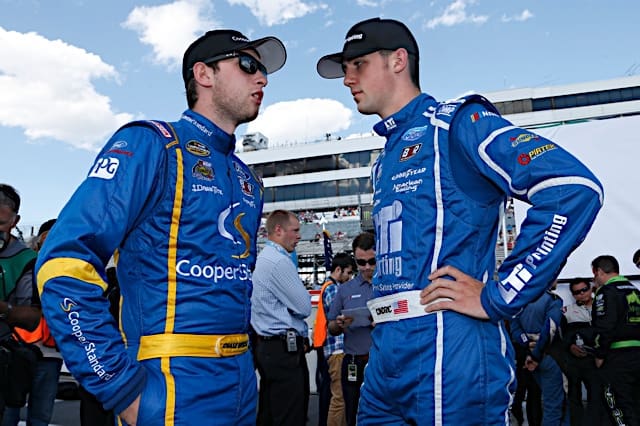 For Briscoe, Cindric and Majeski, the CTSC experience can jumpstart their communication for the 2018 season.  Those three drivers will be sharing Roush Fenway Racing’s full-time No. 60 Ford in the XFINITY Series.

Both Cindric and Maxwell have quite a bit of experience in the CTSC.  Maxwell is a three-time CTSC Grand Sport champion (2002, 2008 and 2016), most recently with Billy Johnson as a teammate.  Maxwell was also the primary development driver for the Ford GT and spent significant time developing the Mustang GT4 through his longtime role with Multimatic.

For Cindric, the move is a return of sorts.

“For me with my background some of my biggest moments in the early part of my career have been with Multimatic racing Mustangs in the Continental Tire Series, so for me I’m coming home,” Cindric said.  “I come from a different background than the other guys and I think we’re going to have a lot of fun, learn a few things and hopefully bring home some hardware because I know those Mustangs are pretty strong around Daytona.  Scott [Maxwell] and I have become really good friends and he’s been a big help to me in my career and I look forward to being teammates with him again and having a little fun throughout the weekend.”

Cindric has 11 career starts in the CTSC.  His series debut came at Road Atlanta in 2014 for Racers Edge Motorsports, where he finished eighth.  In 2015, he drove full-time for Multimatic Motorsports in their No. 158 Ford Shelby GT350R-C.  Cindric and teammate Jade Buford finished sixth in points with a victory at Canadian Tire Motorsports Park, the same place he earned his maiden Truck Series win in September.  That said, Cindric has never raced the Ford Mustang GT4.

First time in a GT4 car today. This is gonna be a lot of fun this year turning left and right. pic.twitter.com/p3KVzHOJ6s

He seemed to enjoy himself there and is looking forward to the chance to race in the CTSC.

“This is something I certainly never thought I would get an opportunity to do, but I’m super-excited for it,” Briscoe stated.  “This will be something new and I’m going to do a lot of it this year, so I think it’s going to be a good learning curve.  I’ve only run two road courses my entire life and even though we ran decent, I didn’t feel like I ever knew what I was doing.  Hopefully, I can get to the point by the end of this year where I know what I’m doing on a road course.  Even though I’ll be driving two different kind of race cars, the principals of how you drive and the technique it takes will be something I can learn.  I’m also looking forward to having a teammate and competing in an event where both of you have an impact on how well you run.”

Custer has some road racing experience, but is eager to learn what he can.

“I’ve never done any endurance racing, but I’m looking forward to having some fun and learning what it’s all about,” Custer said.  “This is obviously a big race and great way to start the season.  Being able to race with the other guys is going to be a lot of fun as well because we’re all pretty much the same age and have a lot in common.  I never thought I would get the chance to do something like this, but road course racing has really grown on me.  I think it’s fun to learn the different sides of things and this is going to be a chance for me to learn as a driver and make myself better.”

For Majeski, the whole experience will be new territory for him.

“I have virtually no road course experience at all,” Majeski said.  “I’ve been on one road course my entire life and that was this past summer when I was sent out to the Ford Performance Driving School in Utah.  Outside of that I have not been on a road course, so this will be great for me to get some experience and be around people who know a lot about it.  I’m looking forward to working with Chase, Austin and Cole as well.  They’re good guys and I’m excited for the opportunity Ford has put in front of us.  It will be a learning experience, but it will be a lot of fun working with those guys and learning together.”

Today, road racing experience for a NASCAR prospect is quite a bit more important than it used to be.  Both the K&N Pro Series East and West have road races on the schedule.  The races are no longer throwaways at the highest levels of NASCAR.  Drivers have to produce.

Ford Performance’s approach to Daytona is not necessarily new.  In 2005, The Racers Group had a special entry in the Rolex 24 dubbed “Team16.”  The driver roster was veteran racer Ross Bentley, plus three 16-year olds.  The most notable of those 16-year olds was Colin Braun, who drives full-time in the IMSA WeatherTech SportsCar Championship for CORE autosport.  The team finished 17th overall, seventh in the GT class.

While the drivers themselves were announced, Ford Performance did not indicate which drivers would be in each car.  That will be revealed in the run-up to the Roar Before the 24 in a couple of weeks.