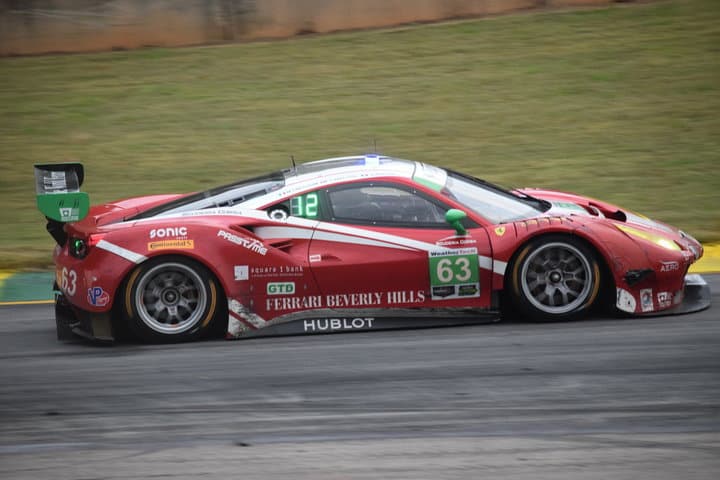 On Friday, Scuderia Corsa announced that they will field a second Ferrari 488 GT3 in the four Tequila Patron North American Endurance Cup races in 2018.  That car, the No. 64, will be shared at Daytona by Townsend Bell, Sam Bird, Frankie Montecalvo and Bill Sweedler.  Bird, who is full-time in the FIA World Endurance Championship and Formula E, will only race at Daytona.  Bell, Montecalvo and Sweedler will drive in all four races.

Team owner Giacomo Mattioli is happy to have Bell and Sweedler back into the fold.

“The return of Townsend and Bill to our organization is a testament to the quality of our relationship, and the addition of Frankie Montecalvo should be a great contribution,” Mattioli said in a press release.  “Combined with Sam Bird for Daytona and all of our resources, we’re very confident in a great showing and fighting for the best results possible.”

Bell and Sweedler drove for Scuderia Corsa full-time in 2015.  In ten starts, the duo earned one class victory (VIR) and a third-place finish at Sebring.  Those runs, combined with consistency netted the team the 2015 GT Daytona championship.

Bell is looking forward to returning to the California-based team in 2018.

“It almost goes without saying that Scuderia Corsa is one of the best teams in the business,” Bell said.  “Our IMSA championship, our Le Mans victory, are all directly attributed to their program, and we hope to repeat the same success this year. It’s the most competitive era in the history of IMSA, but we’re confident we can be right in the mix.”

Bell, Montecalvo and Sweedler all drove for Alex Job Racing last season in the No. 23 Audi.  The team finished all five races they competed in.  Their best finishes were a pair of sixths (Daytona and Road Atlanta).  However, Job decided to close his team down to focus on his restoration business.

For Bird, it will be his second straight year competing at Daytona with Scuderia Corsa.  Earlier this year, Bird co-drove the No. 63 and ran very well until a mechanical issue put the team out with two hours remaining.  He has five career starts in the IMSA WeatherTech SportsCar Championship with a best finish of third in the Prototype Challenge class at Sebring in 2014.