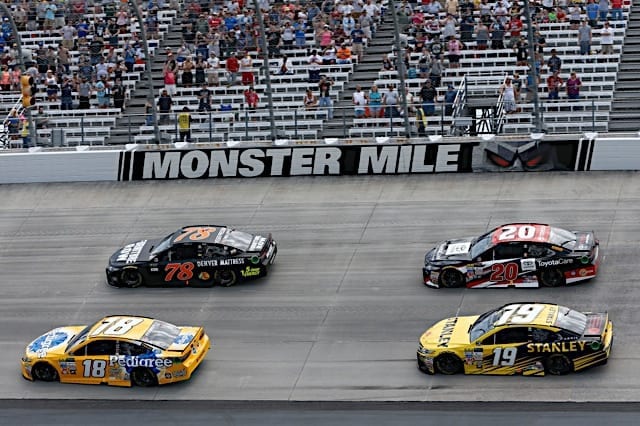 Joe Gibbs Racing has been near the top of the NASCAR Monster Energy Cup Series garage for the last 15-20 years and has generally been recognized as the top Toyota team since switching manufacturers in 2008. As expected, it was a powerhouse again in 2017, with its four-car stable racking up a total of eight race wins, 22 stage wins, 12 poles and over 3,000 laps led.

Before the season, veteran Carl Edwards abruptly left the sport in January, which JGR responded to by hurriedly promoting Daniel Suarez into the No. 19 Camry with roughly a month until the season kicked off at Daytona International Speedway. It was a fairly open secret that Erik Jones would be promoted to JGR in 2018, though not made official until July, which meant that someone would be gone, as the team was already operating at the four-car maximum — something that was complicated with Suarez’s early arrival.

Jones was loaned to JGR satellite team Furniture Row Racing, where he won Rookie of the Year and teammate Martin Truex Jr. won the championship, outclassing the field on a weekly basis. That success was a mixed blessing for JGR – its equipment was light years ahead of everyone else, and yet it was getting beat by its own equipment.

What He Did Wrong – Admitted to the world that he’s terrified of lobsters, which is pretty embarrassing. Also, he wrecked Chase Elliott in the playoffs at Martinsville Speedway, an event that Frontstretch’s Tom Bowles examined in detail. This potentially cost Hamlin a shot at his first championship, given his contact with Elliott two races later at Phoenix International Raceway.

What He Did Right – Almost everything. To begin with, the 2015 champion led all drivers in 2017 with  poles at eight tracks – Dover International Speedway, both Pocono Raceway races, Kentucky Speedway, Indianapolis Motor Speedway, Watkins Glen International, Chicagoland Speedway and fall at New Hampshire.

Busch also led 2,023 laps and earned 14 stage wins and 354 stage points, third overall in that category. He had wins in the late summer at Pocono, fall at Bristol Motor Speedway and in the fall playoffs races at New Hampshire, Dover and Martinsville. Additionally, he scored 14 top fives, 22 top 10s and finished second in points.

What He Did Wrong – Off the track, he had a cameo as a state trooper in the film Logan Lucky. The NASCAR-themed heist caper bombed at the box office.

On the track, Busch had a horrible year at restrictor-plate tracks, crashing out twice at Daytona and once at Talladega Superspeedway, in addition to wrecks at Bristol, Las Vegas Motor Speedway and Indianapolis.

What He Did Right – Suarez scored a stage win and 25 stage points, 12 top-10 finishes, 20 top-15 finishes, raced his way into the All-Star Race, led 40 laps, finished third at Watkins Glen and was runner-up to Erik Jones in the Rookie of the Year battle. He finished the season 20th in the standings. That’s not excellent considering the quality of JGR racecars, but it was a solid outing for a rookie, and overall he flew somewhat under the radar, improving steadily.

Dover and Charlotte were especially strong tracks, with finishes of 11th, sixth, eighth and sixth.

Off the track, Suarez likely gained some points among kids by voicing the character of Danny Swervez in Pixar’s Cars 3:

What He Did Wrong – Subway pulled its sponsorship in August, citing a conflict of interest as Suarez allegedly promoted a competitor by passing out Dunkin’ Donuts during an NBCSN interview at New Hampshire.

Crew chief Dave Rogers left the team before the spring Martinsville race, replacing Scott Graves, so that increased the catch-up factor Suarez was already facing in his adjustment process. He didn’t set the world on fire, as seems to be expected for rookies nowadays, but he had a solid first year.

What He Did Right – He had a very Matt Kenseth-y year, meaning that the 2003 champion was very consistent. Kenseth led 421 laps, and he earned three stage wins and 254 stage points. He swept the poles at both Richmond events, earned 10 top fives and 18 top 10s and finished seventh in points.

Strange things were afoot in the No. 20 camp as sponsorship was shaky, but excellent news came with Circle K stepping up in April to cover six races.

What He Did Wrong – He didn’t drive a DeLorean, so he had the misfortune of being a middle-aged racer at the start of a new generation. That kept him from getting a new contract for 2018. Kenseth’s first Cup start came in 1998, filling in for Bill Elliott. To get his final win, Kenseth had to drive past Bill’s son Chase.

On the more bizarre front, a stalled ambulance at Richmond nearly kept Kenseth out of the playoffs.

JGR led laps and gobbled up poles and stage points. It won races and was solidly in contention for the 2017 title. But it started slowly, failing to win until a significant chunk of the way into the season, and it seemed like the organization also often shot itself in the foot — on the track with finishing runner-up to Truex or with teammates colliding, while off-track, things like the Subway incident, Busch’s criticism of Goodyear or the skirmishes with Joey Logano and the FRR pit crew.

Pit road is one of JGR’s strengths, so the reduction in over-the-wall crew members and especially the newly mandated standardized pit gun could pose some problems in 2018. It will also be losing Kenseth’s experience while gaining Jones’s potential. Suarez will likely continue to improve, while Busch will continue to be one of the sport’s top drivers. Mentally, will Hamlin ever be able to prepare himself to win a title?