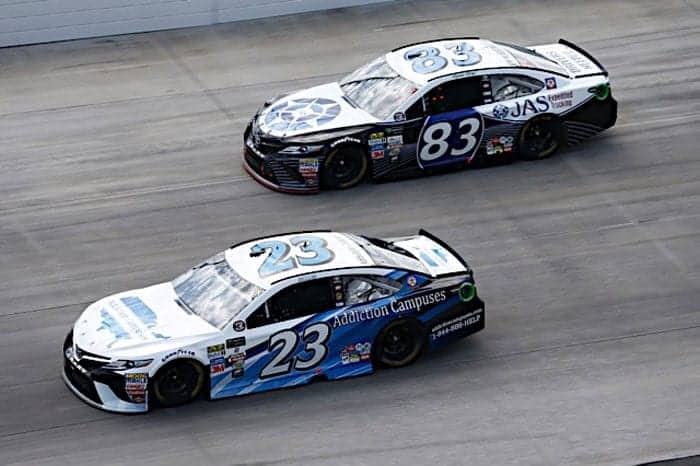 BK Racing entered its sixth season of competition in 2017, and it might have been its most difficult season to date.

Before the season kicked off in Daytona, team owner Ron Devine encumbered the company’s equipment, supplies and racecars in a UCC filing for a $15 million line of credit from Virginia Racer’s Group. In May, it was reported that the team had been issued a federal tax lien. Gray Gaulding was relieved of his duties following the Pocono Raceway race in June, only to rejoin the team in September at Darlington Raceway. And then a week following the season finale at Homestead-Miami Speedway, a lawsuit was filed over a charter that Front Row Motorsports purchased from BK Racing prior to the start of the season.

The team had seven different drivers compete in one of the organizations two teams, with Corey LaJoie having 32 starts under his belt. Gaulding participated in half the schedule (18 races) for BK Racing, while Brett Moffitt, Joey Gase, Ryan Sieg, Alon Day and Stephen Leicht all had valuable seat time as well.

Gaulding picked up his first career top-10 result at Talladega Superspeedway in October, outlasting the melee that took out two-thirds of the field. His ninth-place result was BK Racing’s lone top 10 on the campaign.

For a team that had seven different drivers in one of the organizations two machines, none of the drivers had better than a 30th-place average finish.

LaJoie finished the season with a best finish of 11th at Daytona International Speedway in July, recording his only top-20 result of his rookie season. The North Carolina native had an average starting position of 34.1, with an average finish of 30.2. He competed in 32 events, only missing the spring Dover International Speedway race, Sonoma Raceway in June, Kentucky Speedway in July and Talladega in October.

Flash back to the Can-Am Duels and LaJoie bumped Reed Sorenson out of the way to qualify into the Daytona 500, quite possibly, and self-admittedly, his biggest achievement up to that point of his career.

The 19-year-old was ineligible to compete in the Daytona 500 but started his season as Atlanta Motor Speedway in the second race of the season, finishing 37th. Gaulding would go on to compete in the next 13 races with BK Racing before he put out a cryptic tweet leading up to the spring Michigan International Speedway event.

I wanted to be the one to share the news with my fans and partners but I will not be racing the 23 this weekend at @MISpeedway pic.twitter.com/sTytMTQF3c

Gaulding and Devine went back and forth whoever who owed who money, but the driver returned to the team in early September to finish 36th at Darlington. In 18 events with BK Racing, Gaulding had five DNFs.

Moffitt returned to the Cup Series for the first time in two seasons at Watkins Glen International in August, piloting the No. 83 machine. The Iowa native finished 32nd.

Competing in six additional races with BK Racing, Moffitt had a best outing of 31st in his last race at Kansas Speedway. During the seven races, he had an average finish of 33.7 with one DNF at Charlotte Motor Speedway.

Sieg made his Cup Series debut at Dover International Speedway in early June and was running toward the back half of the top 25 for the early part of the event, finishing the event in 26th. When Gaulding was announced that he wouldn’t return to the No. 23 ride at Michigan, the veteran XFINITY Series driver filled his place.

The 30-year-old would make additional starts at Daytona, Kentucky and New Hampshire Motor Speedway, with a best finish of 27th. At the World’s Center of Racing, Sieg blew an engine seven laps in and finished last.

Gase competed in nine Cup Series events in 2017, five of which were under the BK Racing banner. He kicked off the season with a 23rd-place finish in the Daytona 500, four laps down, after getting caught up in an earlier incident.

Half the season went by until Gase returned to BK Racing at Kentucky, finishing 36th. He would make additional starts at Talladega, Bristol Motor Speedway and Homestead-Miami Speedway with the race team, with hopes of possibly moving up to the Cup Series full-time in 2018, as Jimmy Means Racing announced in October that Gase would not return to the No. 52 XFINITY Series ride next season.

Heading into 2018 there is plenty of uncertainty surrounding BK Racing. It currently owns one charter (No. 23 car), but Devine has told  Frontstretch that he’s open to re-purchasing a second charter.

Whether or not the team will field one or two cars is to be determined, as Devine stated that the team has “not yet” figured out its plans for the new season.

Given the massive legal issues they face, its difficult to see them being around for the long term. Bringing a venture capitalist in tells its own story. But we shall see I suppose.