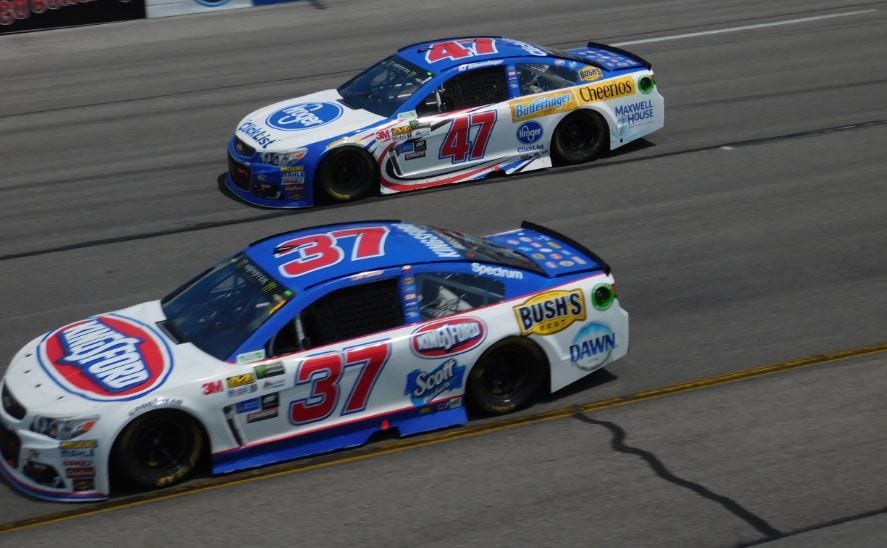 It is no easy feat for a NASCAR team to add an additional entry to its lineup. But that was the challenge JTG-Daugherty Racing signed up for when it hired 2015 NASCAR XFINITY Series champion Chris Buescher to pilot its second Chevrolet.

The acquisition of a second charter took place prior to the season, and after that, the ball was rolling. However, the challenge was much more difficult than it seemed like on paper.

As JTG positioned itself for a transition period, its drivers and teams were tasked with working together to figure out the kinks. With Buescher’s team learning as they went, AJ Allmendinger’s squad was just trying to keep up. Both cars often ran into awful luck, most of which was out of their control.

For JTG-Daugherty Racing, 2017 was one that featured many growing pains. But on the bright side, it did show by the end of the season that there is plenty of potential with its two-car program.

The first five weeks of the NASCAR season were brutal to the No. 37 squad.

The roller coaster ride of a season began with the Daytona 500. Buescher got caught up in a 17-car melee to relegate him to a 35th-place finish. Over the course of the next two races, he began to show potential, taking home a pair of top 25s at Atlanta and Las Vegas.

But after a 27th-place run at Phoenix and a 25th at Fontana, it was time for Buescher to prove to JTG why they hired him in the first place.

The organization headed to Martinsville Speedway with high hopes, mainly because it has always been a strong suit for Allmendinger. Short tracks are the ultimate equalizer when a team is slightly behind. And Buescher did exactly what he needed to. His No. 37 car started 33rd, but methodically made his way through the field over the course of the 500-lap event. When all was said and done, he finished 11th, his first top 20 for the team.

Evidently, the result did start to shift the team’s momentum. With the exception of a lap 53 wreck at Bristol Motor Speedway, Buescher earned five top-21 finishes over the next six contests.

It was the improvement the team was looking for. The No. 37 crew was settling into a groove. Each track he went to, Buescher aimed at improving his results from last year with Front Row Motorsports. It wasn’t playoff worthy, as top 25s are far different than top 10s, but Buescher was drawing a baseline to build from.

When the Monster Energy NASCAR Cup Series returned to Daytona in July, Buescher knew he could have a solid run if he stayed out of trouble. JTG has always been incredibly strong at the restrictor plate tracks, but he needed something to go right with only two top 15s after 16 races.

Buescher started the race in 29th, the fourth time he started in that position within six contests. With the unpredictable track taking over, he maintained his composure, able to keep his No. 37 machine clean throughout the race en route to his first top 10 with JTG (10th.)

It was that top 10 that started a seven-week stretch of more improvements from the No. 37 team. As the weather heated up, so did Buescher and his Trent Owens-led squad.

The team slowly built momentum, with back-to-back top 25s at Kentucky and Loudon before heading to Indianapolis Motor Speedway for the Brickyard 400.

It was Indianapolis that really proved the No. 37 team could do well. A mixture of Buescher’s ability to keep his car clean and maneuvering through traffic led to a ninth-place finish. It was another step forward in the team’s development.

When Buescher returned to Pocono Raceway, a year removed from his lone Cup win, he didn’t necessarily think he would repeat his unbelievable accomplishment. However, he did expect to run well. That wasn’t the case, though. His team fell behind at the 2.5-mile track, finishing a lap down in 28th after a solid 19th-place performance in June.

But that didn’t stop them from performing well at Watkins Glen and at Michigan.

Buescher’s road course racing ability came into effect once again. His steady, smooth approach at the New York facility enabled the team to finish 11th on the day, a respectable outing after running 19th at Sonoma earlier in the year.

The next week, Buescher had an incredible run at Michigan. The No. 37 car was flying around the two-mile oval. After starting 20th, he climbed his way into the top 10 and stayed there for a majority of the afternoon. By the end of the day, he sealed the deal on his best result of the year, finishing sixth.

But the momentum didn’t stick around for long.

From Bristol in August to Talladega in October, not much went right for the No. 37 team. Over the span of eight races, they only tallied up three top 20s.

Just like at Michigan, though, when the No. 37 car took to the track on raceday at Kansas Speedway, everything clicked. From 20th to sixth once again, Buescher proved to be quite the intermediate track racer, taking advantage of solid calls from Owens to position himself at the front of the field.

The next four weeks proved to be respectable ones for Buescher, earning three top-22 results to wrap up the season. The team hopes it’ll be momentum they can carry into 2018.

Buescher ended his second Cup year 25th in the standings, with four top 10s and an average finish of 21.4, an improvement of nearly five positions from his rookie season.

Now on a multi-year deal, Buescher can focus on the future and building this team with Owens to be quite the force come race day. No longer a Roush Fenway Racing prospect, Buescher hopes to be a playoff contender in 2018 in his second season with JTG Daugherty.

The No. 47 team experienced a year of change. Besides getting a teammate, it turned out they would see some adjustments on top of the pit box as well through the year.

Allmendinger started out the season with an incredible run in the Daytona 500. After starting 38th, he managed to stay out of trouble in what ended up being a wreck-fest. Not only did he survive and lead a pair of laps, but he even competed for the victory on the sport’s biggest day.

However, the ‘Dinger came up just short, finishing third behind Kurt Busch and Ryan Blaney. Oh, it was so close to changing Allmendinger’s season and career.

After that promising afternoon to start, the season never lived up to expectations.

Overall, the team could not duplicate its results from 2016, and internal changes within the organization didn’t make much of a difference. Crew chief Randall Burnett was suspended for four races after the second contest of the year, enabling Ernie Cope to take over.

When Cope stepped up, the team had some work to do. Allmendinger finished three laps down at Atlanta, losing all momentum gained from Daytona. But Cope led the No. 47 squad to three top 25s in four races.

The best of all came at Martinsville. Like Buescher, Allmendinger needed a strong race and got it at the short track. As he continues to maneuver Martinsville like a road course, he managed to earn his first top 10 of the year, finishing sixth on the day.

The next week, Burnett came back. He stuck around for five mediocre races, featuring a best result of 20th and four more of 30th or worse, before being pulled completely from the pit box.

Cope came back at Charlotte Motor Speedway and immediately made a difference in the team’s performance. Allmendinger finished 18th at Charlotte, followed by the same result the next week at Dover.

From Charlotte until July at Kentucky, Cope was successfully turning around the No. 47 team. Allmendinger consistently ran in the top 20, and there was light at the end of the tunnel.

With another top 10 during the July race at Daytona, Allmendinger seemed poised for even better results. But the team felt differently. Instead, after Kentucky they named Tristan Smith as Allmendinger’s crew chief with Cope staying on to help with strategy calls.

So the team rolled on with its third head wrench on the year, attempting to make the playoffs with a wing and a prayer. Like their teammate, they, too, finished inside the top 10 at Indianapolis.

Two races later, it was time for Allmendinger’s last realistic shot at making the playoffs: The Glen. The site of his only Cup win, it’s always the one contest the team knows it will be running right at the front. This time around was no different, with the No. 47 team staying in the top 10 for the whole race. But when the checkered flag flew, Allmendinger came home a disappointing ninth.

From there on, the No. 47 Chevy just tried to survive. Frustrating calls and parts failures during practices plagued the team throughout the season. Allmendinger couldn’t catch a break.

By the end of the year, though, there was reason for optimism. Allmendinger earned two solid top-20s in the final three races of the year, hoping things will get better in time for next season.

But there’s no getting around the disappointment of 2017, at least for now. The veteran finished 27th in the standings, his worst season-end result since joining JTG-Daugherty Racing in 2014.

Next year, JTG has teamed up with Hendrick Motorsports to create an engineering alliance. The two-car organization will work with HMS to improve its simulations before hitting the track, along with developing better aero packages moving forward. JTG will still receive engines from Earnhardt Childress Racing, giving them a stronger stance in the Chevrolet family with a fresh body to go along with it.