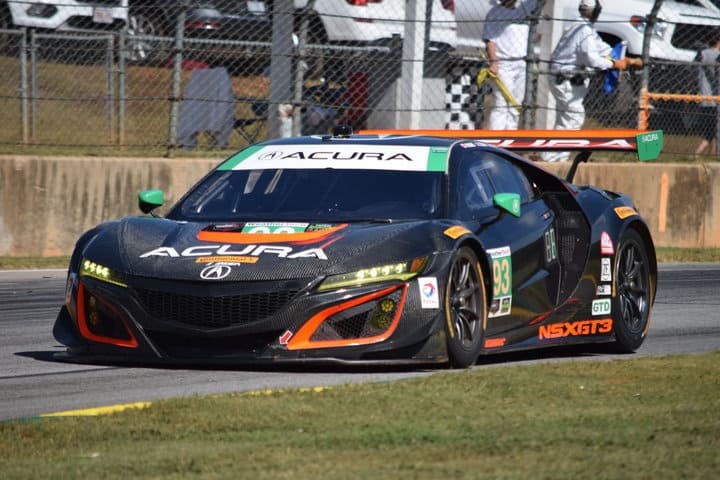 On Monday, Michael Shank Racing rounded out their driver lineups for January’s Rolex 24 at Daytona.  In addition to announcing the final two drivers, a driver shift was announced as well.

Monster Energy NASCAR Cup Series regular AJ Allmendinger will now drive the No. 86 Acura at Daytona.  He was originally scheduled to drive the No. 93 alongside Lawson Aschenbach, Mario Farnbacher and Justin Marks.

Allmendinger will be joined by the previously announced Katherine Legge and Àlvaro Parente.  Completing that team will be Trent Hindman, who will compete in all four of the Tequila Patron North American Endurance Cup races.  Hindman comes to the team from Bodymotion Racing in the IMSA Continental Tire SportsCar Challenge.  He won the 2014 Grand Sport championship solo and has seven career victories in the support series.

For Hindman, the chance to race for Michael Shank Racing was too much to resist.

“Michael Shank Racing is one of the elite teams in IMSA so it was an honor to be presented with this opportunity,” Hindman stated.  “Running with Mike [Shank] and the Acura NSX GT3 is really a chance that I think all drivers in general, not just younger guys like myself, would immediately jump into without any hesitation. I want to thank Mike, the entire MSR team, and Honda Performance Development for their faith in me as a driver and I certainly hope to deliver for them.”

Hindman has three career starts in the IMSA WeatherTech SportsCar Championship.  He made his series debut in the 2017 Rolex 24 at Daytona in the PC class for BAR1 Motorsports, finishing second in class.  His best GT Daytona finish is third at VIR, a deal that came together at the 11th hour for Riley Motorsports after Ben Keating left to tend to his businesses in Texas.

Allmendinger’s move to the No. 86 frees up one more spot in the No. 93 Acura.  That space has been filled by Côme Ledogar, a 26-year old McLaren factory racer from France.  The Rolex 24 at Daytona will mark his IMSA WeatherTech SportsCar Championship debut.

Ledogar is looking forward to racing the Acura NSX GT3 in the United States.

“I am really excited to be joining Michael Shank Racing,” Ledogar stated.  “Driving with MSR means a new challenge for me but with a very experienced team with one of the best reputations in the paddock. I think the Acura NSX GT3 will suit me well since it is a brand new mid-engine car; which is the same set up that I have been driving the previous two years.”

Ledogar has had his share of success driving McLarens.  He was the 2016 Blancpain GT Series Endurance Cup champion (along with teammate Rob Bell) with victories at Monza and Paul Ricard.  In 2017, Ledogar moved to Strakka Racing and struggled at times.

The general public will see the two complete lineups for the first time at the Roar Before the 24 in January.