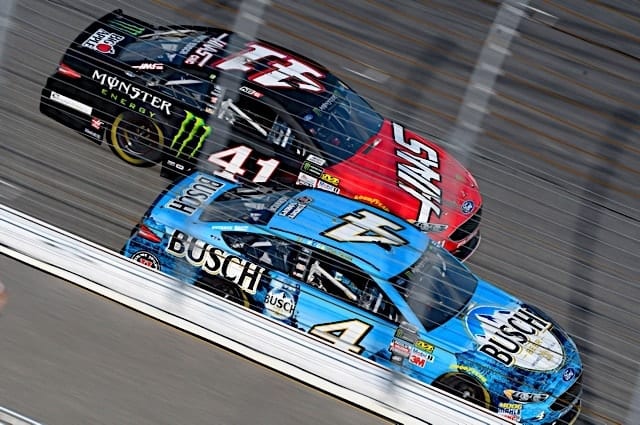 The 2017  season was one of change for Stewart-Haas Racing. But as the organization usually does, it faced it head on and even impressed itself.

The manufacturer switch from Chevrolet to Ford for the four-car team dominated the headlines throughout the offseason as well as early parts of 2017. Everybody, drivers, owners, crew members, fans and the like knew that this wasn’t a small change and that the results would take some time.

What a year it's been! We rang in 2017 & our switch to @FordPerformance by gathering the boss man @TonyStewart & the entire SHR driver lineup for one epic class picture. #2017FinalLaps pic.twitter.com/Svfh9M9K7j

Somebody forgot to give Kurt Busch and the No. 41 team the memo.

The season kicked off with a bang for SHR and company, as Busch wheeled his Ford Fusion to Victory Lane at Daytona International Speedway for his first ever Daytona 500 victory. The win was Busch’s first at Daytona, SHR’s first in the Great American Race and it all came in race one with the blue oval.

Ford and SHR’s marriage was off to a quick success. They opted to skip the honeymoon altogether and jump straight in, and did so with a bang. For the success to be replicated, though, it would take much more work (and time) from all parties involved.

But when the checkered flag flew on the 2017 Monster Energy NASCAR Cup Series season, one of the four championship contenders was a Stewart-Haas Racing vehicle: Kevin Harvick.

Harvick wound up third in the overall championship standings behind two Toyotas, Martin Truex Jr. and Kyle Busch. Those two drivers also happened to be the quickest on the circuit on a consistent basis. Harvick hovered around being the third-best car throughout the season and finished about where he and the No. 4 team deserved to.

Two wins (Sonoma Raceway and Texas Motor Speedway), 14 top fives, 23 top 10s, four poles and 850 laps led is nothing to be disappointed in, especially given the hurdles of switching manufacturers. Harvick and SHR are a championship caliber team (see: 2014), and they proved that once again this season. Give the Bakersfield, Calif., driver, Rodney Childers and that team one more year, and you have yourself a pretty sporty team ready to do a little more damage in the Championship 4 at Homestead-Miami Speedway in 2018.

Busch’s season didn’t go as well as the Las Vegas native would’ve hoped after the season-opening Daytona 500 triumph. He struggled through the spring and had a bit of a resurgence in the summer months, highlighted by a near-victory in the Southern 500 at the challenging Darlington Raceway. But bad luck and lack of speed forced the No. 41 bunch to be among the first round eliminations in the Round of 16 in the playoffs.

One win (Daytona), six top fives, 15 top 10s, one pole and 16 laps led isn’t exactly what a former champion would like to see in the box score after a season that begun with so much promise. But now that the contract negotiations are done, Busch can focus on racing and racing only. Adjusting to a new crew chief in Billy Scott will have some growing pains, but they’ll get through it. Who doubted Busch when he was in the dumps, driving for the No. 51 for James Finch? Or the No. 78 before it hit its stride? I wasn’t. Because The Outlaw is a baaaad man. And I’m not betting against him.

2017 was supposed to be a year of resurgence, a new chapter and brighter pastures for Clint Bowyer, but his season didn’t have any hint of Hollywood magic in it whatsoever.

With zero wins, six top fives, 13 top 10s and 22 laps led, Bowyer failed to qualify for the playoffs in his inaugural season at SHR, having taken over for the recently retired and longtime friend Tony Stewart. Mike Bugarewicz was Bowyer’s third crew chief in as many seasons atop the pit box. That adjustment, along with a new team, manufacturer and lifestyle proved tough for the Emporia, Kan., native.

And then there’s Danica Patrick. In case you live under a rock, she won’t be returning to the No. 10 car next season and will be retiring from NASCAR competition after the 2018 Daytona 500, assuming she finds a ride. But her final season at SHR ended like it started: disappointing.

Danica Patrick's car goes up in flames after a crash in Stage 2 at @HomesteadMiami. Not how she wanted her full-time career to end. #NASCARPlayoffs pic.twitter.com/ipDwvMDcv7

One top 10 and seven laps led for Patrick were all she saw in terms of eye-popping statistics this past season. A 28th-place finish in the point standings didn’t help matters either. While teammates Harvick and Busch were battling up front with Joe Gibbs Racing, Hendrick Motorsports and Team Penske, she was in the mid-to-late 20s battling Front Row Motorsports, Leavine-Family Racing and Germain Racing.

No disrespect to those teams, but in a car like Patrick has been piloting, her results were terrible. Is this to say the NASCAR experiment didn’t work? That’s up to only Patrick herself. But it seemed like her being in SHR equipment for the entirety of her Cup career gave her somewhat of unfair expectations. With no experience, was she supposed to run with former champions like Harvick, Busch and Stewart? Anybody in their right mind would say no.

But as one door closes, another one opens. Aric Almirola will be filling the No. 10 seat next season with sponsorship from Smithfield. His three top fives and six top-10 finishes are sure to increase this upcoming season, as SHR’s equipment far outweighs Richard Petty Motorsports’.

Sponsorship is still somewhat of a question mark for some members of the organization. Busch’s one-year deal is reported to have Monster Energy re-upping, but Haas Automation is expected to be on the car more than a few times, just like last season. Bowyer is in the same position with Mobil 1 and Rush Truck Centers. Harvick is set with Busch, Jimmy John’s and Mobil 1, and Almirola is good to go with Smithfield as well. With most of the major question marks out of the way, the 2018 season looks to be one of the best in Stewart-Haas Racing’s brief history.

Was 2017 a success for Stewart-Haas Racing? Given the circumstances surrounding the organization, a relatively young one in terms of the landscape of the series, a manufacturer switch that takes some teams years to adjust to and the ever-changing lifestyle that is the MENCS, I would give a resounding yes to that question.

Now, the question is, will 2018 surpass their 2017 expectations? Only time will tell.