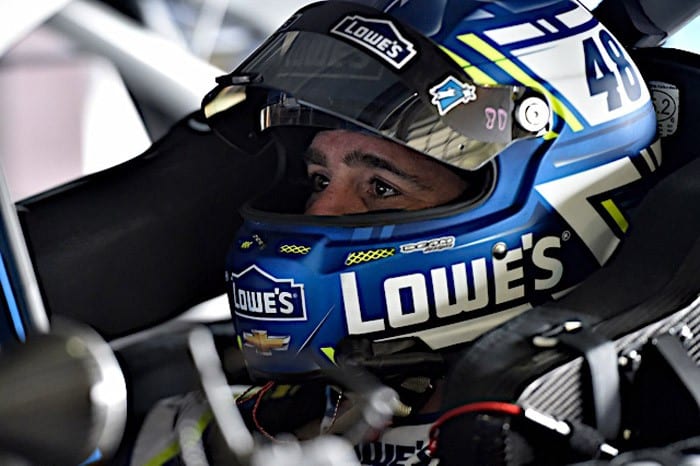 There is one thing that no NASCAR driver, no matter how great, can avoid.  Astronomical talent, great equipment, the best people in the garage, jaw-dropping good luck all give way eventually to the one thing not even the best crew chef can engineer away.

No driver is immune to the advancing of years, the marching on of the sport.  An era dawns, a driver defines it and then twilight sets in. As predictable as the tides, time rolls through NASCAR.

Has it caught up with Jimmie Johnson?

One look at the numbers in 2017 and it’s obvious that something wasn’t right.  Johnson’s four top fives, 11 top 10s, 217 laps led and 16.8 average finish were all career lows of a tenure that’s lasted 16 seasons.  There were also three wins and his 15th top-10 points finish, but even those, numbers most drivers would be proud of, are telling of a less-than-stellar season for a driver who’s never won fewer than two races in a year and has only finished outside the top five in points four times.

The real warning knell is perhaps that three of those four sub-top-five seasons have been in the last four years. Johnson bounced back in 2016, winning the title with some 11th-hour luck and a brief glimpse of the old magic to seal the deal. But even that seventh title, the one that gives Johnson NASCAR immortality, hints that every driver is mortal. It took a stroke of luck for Johnson to win, and unlike in his early days, he didn’t make it himself.  Like the champion he is, he capitalized, but there was a time when Johnson could pull a seemingly impossible win out of his… um, hat.

He hasn’t done that in a while.  Still, it can be argued that if not for a $2 part failure, he might have had a much better points finish in 2015.  What can’t be argued was that there was no magic to be found this time around.

Johnson squeezed past the first round of the playoffs, but that was the best he could muster.  Most shocking was his inability to win at Dover International Speedway, Martinsville Speedway, Texas Motor Speedway — tracks where he’s often shone in the fall. He mustered a third-place at Dover, his only top five in those 10 races. That was it.

Johnson is the winningest driver in NASCAR’s playoff history.  He’s won 29 of 140 playoff races dating back to 2004—the next best driver is Kevin Harvick, a distant second with 12 playoff victories.  He has at least one playoff win every year until 2017.

So, what happened to the driver who once played the game better than anyone? If time hasn’t simply caught up, what’s the reason?

There are other factors to consider.  The Chevrolet SS has been behind the Toyotas and Fords for a couple of years.  His Chevy was the only one to make the final four in the playoffs in the last two seasons. It hasn’t just been Johnson; the Chevrolet teams as a whole have struggled as a whole, even with a few wins here and there.

But while the cars are part of it, there’s another question that has to be asked: Have Johnson and crew chief Chad Knaus been together too long?

Knaus and Johnson’s pairing in 2002 was the recipe for the perfect storm.  Johnson was brilliant behind the wheel, Knaus just plain brilliant, and they flourished together.  When the car wasn’t right, Johnson could describe what it was doing in detail, down to the last time it felt like that. Knaus would take Johnson’s feedback and make the car faster. And they did it almost every week.  Bad luck during a race? They made their own luck, thank you very much, and when some obstacle did pop up, it only served as motivation to overcome it.  And they overcame it again and again. Knaus would devise a strategy that seemed impossible, and Johnson would make it happen. Fans of other drivers hated it.

Recently, though, the magic hasn’t happened. At times in 2017, Johnson would give Knaus his thoughtful feedback only to be told that his crew chief had no idea how to make it better, no idea how to find the speed they’d always found. Strategy calls were the wrong ones week after week.  Frustration was palpable; the two frequently sniped on the radio, the crew chief frustrated that for the first time he couldn’t find that extra tenth of a second, the driver frustrated that nothing helped.

The slide started after Johnson’s third win of the season at Dover.  Summer has always been a time when Johnson and his team slumped a bit, sometimes by design as they focused on the playoffs and experimenting for those races. Nobody panicked then.  Johnson would roar back in the playoffs, to the chagrin of everyone, just like always, they said.

Until he didn’t. Even after mediocre runs at Chicagoland Speedway and New Hampshire Motor Speedway, well, surely Johnson would bounce back at Dover, right?  But even at Johnson’s best track, a lackluster third was the best he could do. But there was still Martinsville… where Johnson struggled to finish 12th.  It never got better.

So the question has to be asked: Is Johnson, 42 and the oldest full-time driver on the Cup circuit in 2018, starting to decline?  If the Chevrolet camp and the new Camaro are more competitive as a whole next year and Johnson doesn’t bounce back, well, it has to be a consideration.  But without a crew chief change as well, something Johnson is adamant he doesn’t want, it’s still hard to say.  Perhaps the logical thing for Hendrick Motorsports to do would have been to let Knaus bring along rookie William Byron and give Johnson a chance to try something different with Darian Grubb, but Knaus and Johnson agreed they want to stay together until one retires.

Maybe that’s a mistake.  Or maybe time, the sports great equalizer, has caught up with Johnson, the one thing even Knaus can’t adjust away.

I think there is a typo at the end of paragraph 5… you misspelled “ass”.

Its difficult to tell how much is the driver and how much the car. One thing for sure. Now that Danica is gone the haters can focus on Johnson.

Danica didn’t leave Ricky for you and Johnson already has a fan club president.

Didn’t take long for my prediction to come true did it?

What the hell are you talking about? Where is there any hate in any of these comments?
Even if there were, your “prediction” would be like predicting 6:00 at 5:30.

I’d like to think that’s the stupidest thing you’ve ever said, but I doubt it would be.

Take the money and run while you still can – like Jr. did.
But he’s owned the golden horseshoe for years and won’t quit until he gets that next championship to set the record.
Wish him luck but don’t think it will happen.

Jimmie is fine, and is not down and out, and this is from a huge non fan. Just a fact that one cannot dispute or ignore. Regardless of how he gets there, he gets there with NASCARS blessing and a whole lot of luck. That lucky horseshoe is no bullshit.