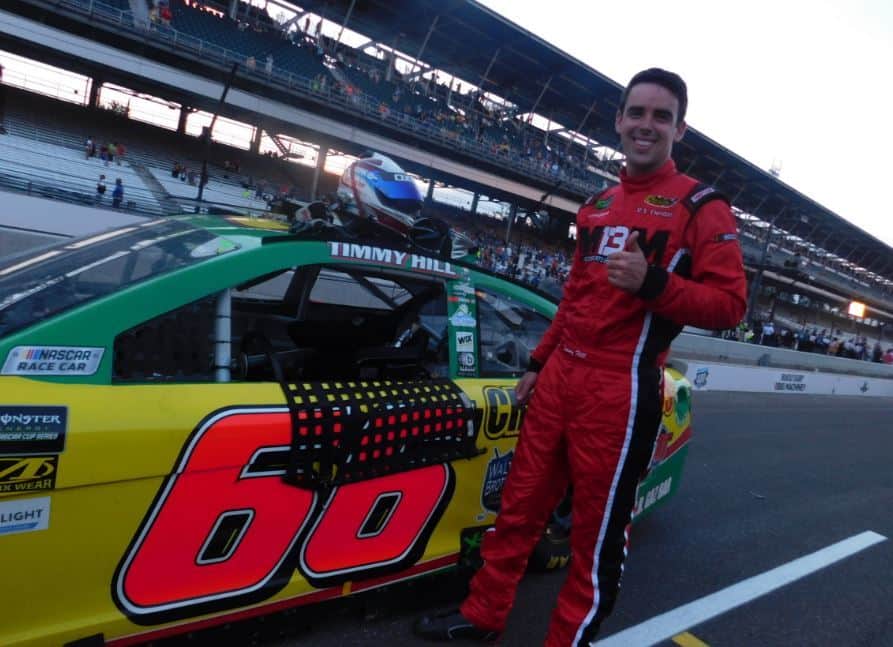 2017 was like a puzzle for MBM Motorsports in the Monster Energy NASCAR Cup Series. Carl Long had to find the pieces and put them together in order to create a Cup team capable of making the 40-car field each week.

It all began after the team, a full-time XFINITY Series effort, purchased an old Cup car from HScott Motorsports in December. The original plan was to convert the car as Long was banned from Cup competition.

In 2009, Long had an illegal engine discovered during NASCAR’s All-Star Race weekend. That resulted in Long being banned from the Cup Series and facing a $200,000 fine.

But in 2017, Long was allowed to return after meeting unspecified conditions by NASCAR. That caused the team to keep their Cup car and choose to attempt a limited schedule based on sponsorship.

Long officially made his return behind the wheel in the Cup Series at Kansas Speedway in May. The return to competition had some controversy though as Long showed up to Kansas with a Colorado-based marijuana-vaping company (Veedverks). NASCAR forced Long to remove the decals from his car but the sponsor continued to back him. The move paid off, as Long secured his second-best career effort of 31st.

After Kansas, Long would hand the reins over to Timmy Hill. In three races, Hill would secure his and the team’s best career finish in the Cup Series at Indianapolis in July. Hill would finish 14th in his 200th start, an impressive accomplish for an organization running a shoestring budget compared to multi-car giants Hendrick Motorsports, Joe Gibbs Racing, and Team Penske.

In his 200th NASCAR start, @TimmyHillRacer finished the #Brickyard400 in 14th! Such a great accomplishment for this small team! #NASCAR pic.twitter.com/beFpq1UFCj

Long returned to the car at Darlington and finished 33rd. Timmy Hill raced the next three races with a best finish of 33rd at Charlotte.

Martinsville was tough for Long as he returned to the car for the first time since Darlington. Long lost his brakes entering Turn 1 late in the race and he backed it into the wall, destroying the car.

The following weekend, the No. 66 came to Texas with Houston, TX native David Starr. He finished 38th at Texas but secured backing from Eureka Vacuum Cleaners which allowed Starr to race in the final two events. A 28th at Phoenix and a 36th at Homestead gave the team needed experience as they built for the 2018 season.

A return to the Cup Series for Long was a victory in itself. Add on a 14th-place finish at Indianapolis and it had to be a success story for MBM Motorsports, who simply struggles to finish races in the XFINITY Series.

The team has announced that they will return next season with Mark Thompson racing a newly acquired Ford at Daytona. Starr and Hill will also return to the Cup Series for MBM. Knoxville, TN native Chad Finchum will race in the XFINITY Series full-time driving the No. 40, competing for Rookie of the Year.

The hypocrisy of NASCAR not allowing a cannabis vape sponsorship and yet allowing pharmaceuticals and alcohol be the norm. Afraid of making the sport look bad or giving the wrong “image?” I think France and company are doing a fine job in that dept.

So agreed! At some point before I die, I swear to God the idiots running na$crap will somehow implement traffic lights and an HOV lane into the former sport.

The idiotic part is Veedworks is not a “cannibis company” at all. No more so than your local gas station. They sell vaping products. That’s it. They don’t “sell weed.” You can’t advertise that! True, you can use their products (Vapes) to smoke marijuana oil in, just the same way you can use a rolling paper to smoke a joint in, though they’re “supposed” to be used for *tobacco* as it says on the label. You can use a Zippo and some MatchLight lighter fluid to light up a cigarette, cigar, blunt, crack pipe, bomb, moonshine still, or your wife’s car but I don’t see na$car banning those sponsors.

Because they have more money.

But I’m tired of seeing them continuously being labeled as “that pot company that Carl Long tried to sneak by na$car.” They are no more a “weed company” than your grandmother was a weed smoker just because she happened to keep a few extra candles around the house!!!

They are cleverly taking advantage of the news surrounding the long overdue but pathetically slow (thanks to Republicans) legalization of marijuana in the U.S. and adjusting their marketing campaigns for that, thus capitolizing on all of the media hype that comes with this implementation into the 1830’s by our douchebag government.