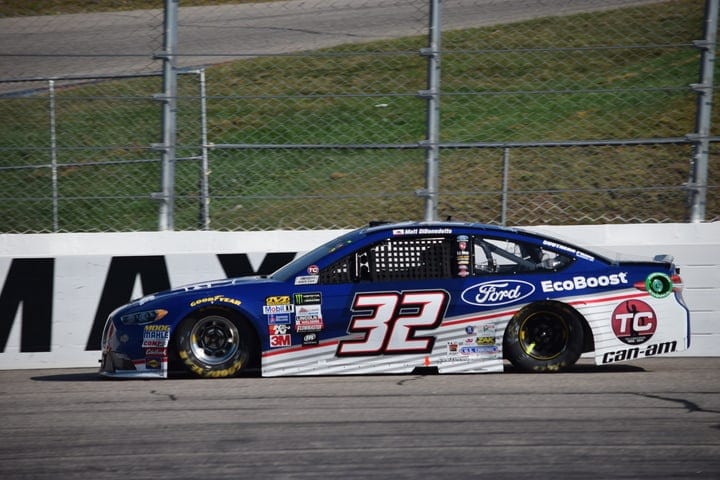 2017 was a big year for DiBenedetto, highlighted by two top 10s and the best average start and finish of his three-year career. Those two stats, however, were the best things that happened for DiBenedetto, who finished 32nd in points.

One of those high notes came in the Daytona 500. As drivers were running out of fuel at the end, DiBenedetto was able to bring home the No. 32 in the ninth position, just his second top 10 of his career.

After that, a string of dismal finishes would follow. In a six-race streak, DiBenedetto failed to finish better than 26th. But a return to Bristol Motor Speedwaywas just what the team needed.

Rewind to 2016, one of the feel-good stories of his career to date came at the World’s Fastest Half Mile. DiBenedetto brought home a sixth-place finish, which remains his best career finish. Returning to Bristol in 2017, he was able to rekindle some of the magic and bring home a 19th-place finish snapping the streak of six straight finishes outside the top 20.

A 28th-place run at Richmond International Raceway, put strong runs on the backburner, but at Talladega Superspeedway, DiBenedetto was able to survive the chaos and finish 18th. Really, superspeedways were his strong suit in 2017, as a 13th-place result at Daytona in July followed.

Indianapolis Motor Speedway was a special victory for many of the underfunded teams in the Cup Series, including Go Fas Racing. Surviving the crashes and rain delays, the end result was an eighth-place finish, his best finish of the season with Go Fas Racing.

Not. A. Bad. Day. pic.twitter.com/pmeZpW56bk

A few weekends of disappointing finishes at Pocono Raceway and Watkins Glen International turned around at Michigan on Aug. 12, when he and team owner Archie St. Hilaire announced that he will return to the organization in 2018. The announcement gave DiBenedetto a sigh of relief as silly season kicked into high gear.

He’d end the regular season with two finishes inside the top 30, but it wouldn’t be enough for him to clinch a spot in the playoffs.

Though 2017 was a season that DiBenedetto and his organization would much like to forget, there were those high notes to make the bad times feel better. For the underfunded teams like Go Fas Racing, Furniture Row Racing’s championship victory can be a light at the end of a long tunnel. That light lets teams know that it can happen, it just takes time. With DiBenedetto returning in 2018, it gives the team an opportunity to improve its equipment and build something very special.

After all, empires aren’t built overnight.

Spent the day working with my buddy @JoshWeikel who owns a landscaping company. Not a lot of drivers have worked normal jobs and I did just a few years ago for most of my life. I love doing stuff like this to really appreciate how lucky I am to be doing what I love for a living pic.twitter.com/YnI1GLVrIG

Such a under rated driver. I remember that top 10 finish, he was very emotional and Kyle Busch was pouting and mad because he didn’t win. Really shows how much those top 10’s mean to smaller teams and how those big teams can take ’em for granted.