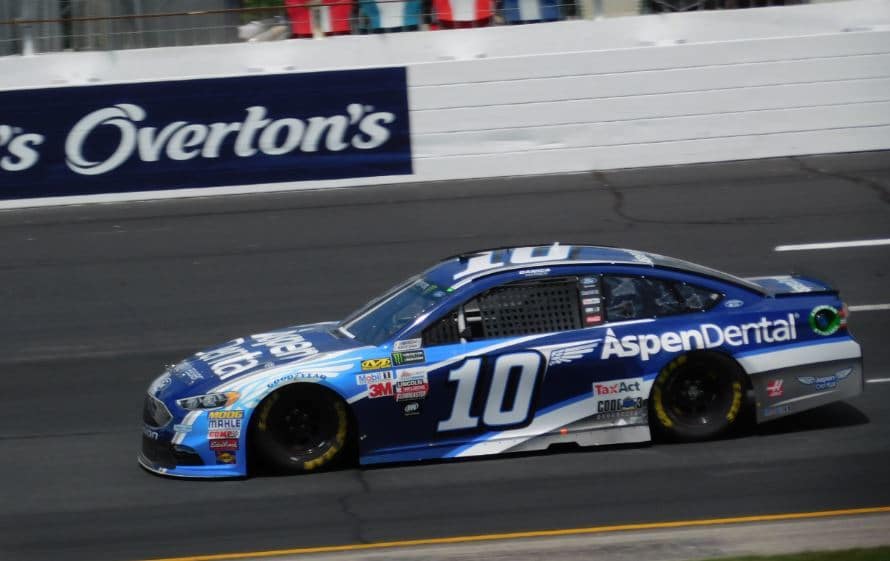 Aspen Dental will not return to the Monster Energy NASCAR Cup Series and Stewart-Haas Racing in 2018. They had previously been a primary sponsor of Danica Patrick and the No. 10 Ford Fusion but will leave the sport along with Patrick’s exodus next season.

The decision was first reported Wednesday by Adam Stern of the Sports Business Journal.

The move was not unexpected, as the team released Patrick in favor of Aric Almirola, who brings his sponsor Smithfield Foods to the No. 10.

Aspen Dental joined SHR in 2012 as a sponsor of Ryan Newman’s No. 39 Chevy Impala. They moved to Patrick in 2015 and served as her primary sponsor for roughly half the season in 2017 following the premature exit of Nature’s Bakery, which came after GoDaddy left auto racing altogether in 2015.

Aspen Dental is the latest in a string of major companies to pull out of stock car racing’s top series this year. Target left Chip Ganassi Racing and the No. 42 team of Kyle Larson in order to focus on sponsoring soccer, primarily as the jersey sponsor of Major League Soccer’s Minnesota United.

The sport’s top series has lost over forty major companies/brands in the last ten seasons, according to Frontstretch research through Jayski photo archives.

In addition to the aforementioned companies, SHR has lost Office Depot, Old Spice, Outback Steakhouse, and Quicken Loans, none of which are currently partnered with a team. The organization, a two-time series champion, is only nine years old.

Roush Fenway Racing has been hit hardest by this exodus, losing support from the likes of 3M, Aflac, Best Buy, Crown Royal, Kellogg’s, Scotts/Ortho, Subway, UPS and Zest all this decade. Several of those moved to other teams, but none are currently sponsoring a driver.

Even the armed forces have had second thoughts. The U.S. Army and the National Guard both felt that NASCAR marketing wasn’t an effective or efficient way of recruiting, pulling out in 2013 and 2014, respectively. The U.S. Air Force is a notable exception, sticking with Richard Petty Motorsports and Darrell Wallace Jr.

It’s a well-known fact that if drivers bring money, they can stay behind the wheel. Paul Menard and the Menards sponsorship is a good example; it’s kept him employed with contending teams. Also, when drivers retire, their money goes with them. That happened to Richard Petty Motorsports in 2015 when Brian Scott hung up his helmet. His family-backed businesses Albertson’s, Shore Lodge, and Whitetail disappeared from the NASCAR circuit.

Red Bull exited NASCAR in 2011 with the closure of their self-owned race team in order to focus on their Formula One team and the Red Bull Global Rallycross series.

Sometimes businesses decide to shift their marketing efforts elsewhere, which has resulted in BRANDT (JR Motorsports), Pilot/Flying J (JRM), Rheem (JGR) and Hunt Brothers Pizza (SHR) all shifting to the NASCAR XFINITY Series. The Fraternal Order of Eagles went to GMS Racing and Justin Haley’s No. 24 Chevy in the Camping World Truck Series.

Additionally, the business may choose to promote a different division, as PepsiCo increased the presence of Mountain Dew on Hendrick cars while AMP Energy gradually disappeared. Anheuser-Busch similarly determined to market Busch and Busch Light instead of Budweiser on Kevin Harvick’s No. 4.

But just because a company may leave the Cup Series for a few years, that doesn’t necessarily mean they will be gone for good. NAPA Auto Parts left Michael Waltrip Racing in 2013, choosing instead to back Chase Elliott in the XFINITY Series. As he moved up to Cup, they stayed with him.

Occasionally, the business decides it makes more sense to sponsor a race instead. as John Deere did in the late 1990s or South Point Casino did recently with the new playoff race at Las Vegas Motor Speedway.

While in the days of Dale Earnhardt and Rusty Wallace, drivers mostly had one full-time primary sponsor, now there are just a handful left in the series. Lowe’s and Jimmie Johnson along with FedEx and Denny Hamlin are the most prominent examples.

Mobil 1 split their 2017 sponsorship with SHR among all four drivers. Bass Pro Shops will split their races between Martin Truex Jr. and Ryan Newman in 2018. Menards will be on the Wood Brothers No. 21 for 22 races and on Ryan Blaney’s No. 12 for the other 14.

This decline in sponsorship dollars and continuity is disheartening to fans. However, the current growth and expense of the three national series have forced teams to adapt as best they can in order to stay afloat. Furniture Row Racing grew from a self-funded start-and-park outfit into the sport’s top team, partially due to money from increased sponsorship. Others could do the same.

Sponsors obviously enter or leave a sport based on the perception, or in the case of leaving, the reality of the return on their investment. Some such as those you’ve mentioned don’t see stock car racing as being worthwhile. The upside I suppose is that now other companies may be able to absorb the cost of a smaller, more limited, investment.

As to teams I dont think you will see a repetition of what Furniture Row has done. The charters have eliminated the possibility of that recurring. Is that good or bad? For the existing teams its probably good. For the sport, probably not so much.

Of course no one in the NASCAR media ever calls them out on this and just accepts the non-answers they are given.
Putting aside all of the unsuccessful changes to the product courtesy of the 3rd generation (and it’s hard not to put them aside), I think the whole AT&T situation back in 2007/2008 scared off a lot of then-existing and potential sponsors.