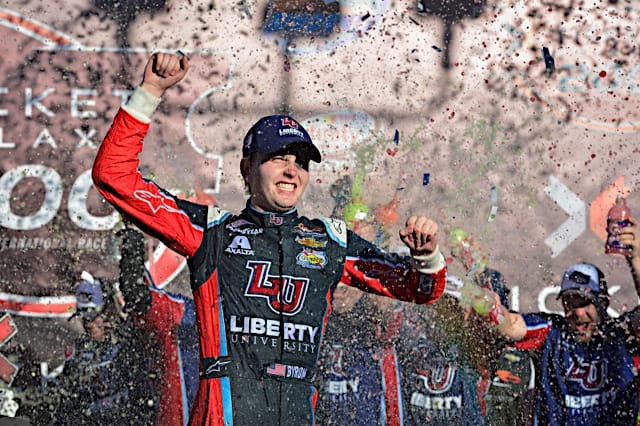 For many years, NASCAR had a logjam when it came to new talent in the Monster Energy NASCAR Cup Series.

Companies didn’t want to leave established stars for new drivers, especially with an economy as weak as it was. There have been two rookies from the 2008 to 2012 classes (Joey Logano and Brad Keselowski) who have made the playoffs at some point in their careers.

The first wave began in 2013, when Danica Patrick, Ricky Stenhouse, Jr., and Aric Almirola began their first full-time seasons in Cup. It has continued in droves since; some of the biggest names in the Cup Series now (Kyle Larson, Chase Elliott, Ryan Blaney, Erik Jones, etc.) have burst onto the scene since 2013.

Some would think that this would lead to an absence of young talent in the lower XFINITY Series and Camping World Truck Series, but instead the opposite has occurred. With stricter limits on Cup drivers competing in the lower series, there has been a major influx of young talent that really began to break out in 2017.

William Byron led the charge. Byron might be the most naturally talented driver to ever get behind the wheel of a race car, having climbed all the way up from his first start in Legends cars to being named the new driver of the No. 24 Hendrick Motorsports Chevrolet within five years.

In 2017, Byron backed up his seven-win performance in the 2016 Truck Series with a championship in the XFINITY Series. He won at Indianapolis and the July Daytona race, which have both been largely dominated by Cup drivers in the past.

Every time Byron approaches what’s supposed to be a brick wall, he has just kept breaking through it. He was by far the best driver in the Trucks in 2016, only losing the championship with an ill-timed blown motor in the penultimate race of the season. He only needed one season in XFINITY to be named to a Cup seat instead of two to three as has been the standard. It’ll be very interesting to see how he performs in Cup in the years to come.

Daniel Hemric raced for two years in the Truck Series but didn’t really seem to turn a lot of heads. When Richard Childress Racing named him as a full time driver for 2017, some were wondering what was going on at RCR. After all, Brandon Jones seemed to be on track to have a break-out season and Brendan Gaughan was a veteran who brought sponsorship. Hemric seemed to be a bit of a stopgap.

Who would have guessed that Hemric would end up competing for a championship at Homestead?

While Jones struggled with just three top 10 finishes on the year and Gaughan not making much noise in the playoffs, Hemric was able to step up and have a great season. He didn’t win, but he did end up finishing fourth in the points and earned 16 top 10s throughout the season.

Another driver who had a standout rookie season in the XFINITY Series was Cole Custer, who ended strong with his very first win in a NASCAR national touring series race at Homestead. Custer finished the year fifth in points and rebounded from not making the playoffs in the Trucks in 2016.

All in all, drivers born in the 1990’s won 19 of the 33 XFINITY Series events in the season. That number is a bit misleading because it includes wins by Logano, Blaney, Erik Jones, and Larson, but it’s still solid proof of how well the new “young guns” did in 2017.

Over on the Truck side, it was even more lopsided. Christopher Bell, after spending 2016 in the shadow of teammate Byron, broke out and won both the championship and five races. After winning a late season XFINITY race at Kansas, Joe Gibbs Racing announced that Bell would move up to its XFINITY program for 2018.

With Toyota putting so much into development drivers and being the only manufacturer actively supporting the Truck Series, you’d think TRD drivers would dominate. But in reality, there were also plenty of Chevrolets and a pair of Fords that fielded great young drivers. Austin Cindric won at MoSport and ended up third in the points. Ben Rhodes made gains in his second year on the circuit and won at Las Vegas. Kaz Grala had an up-and-down season but made the playoffs thanks to a win at Daytona to start the season off.

John Hunter Nemechek won two straight in one of the most dramatic stories of the year, after his father Joe told him that if he didn’t win they wouldn’t have the money to keep the lights on at NEMCO. Even Ryan Truex, who struggled to gain a foothold in NASCAR and whose career should have been over after a disaster of a rookie season in Cup in 2014, had a great year and was the best driver not to make the Truck playoffs.

The crazy amount of drivers that are so young they don’t know what a VHS is something we’ve never seen before. In years past, the XFINITY Series was primarily made up of Cup drivers, lifers like Randy LaJoie or the Greens, and some young talent. Now, with the new rules severely limiting older Cup drivers from dominating the series, now it’s mainly Justin Allgaier, Elliott Sadler, and a bunch of 20-somethings battling it out for the lead every week.

Trucks have always been a solid mix of veterans in the twilight of their careers, lifers, and young talent. Now all of the veterans have been forced out due to the lack of rides/funding available, the lifers are down to just Johnny Sauter and Matt Crafton, and young talent that are either supported by their manufacturer or already come with sponsorship.

We know this talent is deep. The question is, will fans connect to them and more importantly, will sponsors support a move up the ladder? That, as it always has been, will be the deciding factor as to whether any of those names listed above will end up becoming Cup drivers. It’s a talent boom the likes of which have never been seen in racing before.

…”At some POINT in their careers”??? More than a POINT OR TWO. Oh yeah, a Cup Championship too…albeit the 10 race one, better than the one race one. Think those YOUNG GUNS did pretty good. One is only 27 and the other is 33.