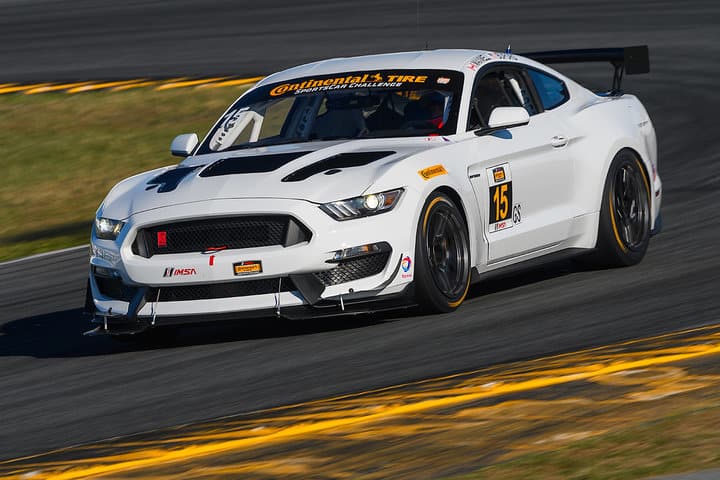 For the IMSA Continental Tire SportsCar Challenge, next week’s Roar Before the 24 is the beginning of a transition season for the series.  So far, it looks like it may result in a more top-heavy series.

There are 40 teams entered in the season opening Roar Before the 24.  However, 28 of those teams are Grand Sport teams in GT4-spec equipment from seven different manufacturers.  If the test session were an actual race, it would be the largest entry in the Grand Sport class since 2014.

Ford has the largest representation with seven Mustang GT4s.  Three of them are from Multimatic Motorsports.  One is a full-time entry (No. 8 for Chad McCumbee).  The other two are the NASCAR Young Gun cars.  Only veteran mentor Scott Maxwell (No. 15) and Austin Cindric (No. 22) are currently assigned cars on the list.  VOLT Racing is back with their No. 7 Mustang, but with Trent Hindman replacing Chris Hall.  KohR Motorsports has their two cars with Joey Atterbury replacing team owner Dean Martin in the No. 59.  Kyle Marcelli and Nate Stacy will share the No. 60 full-time.  Finally, the new Andrew Wojteczko Autosport (AWA) No. 80 will be shared by former Pirelli World Challenge GTS competitors Martin Barkey and Brett Sandberg.

Five of the new Mercedes-AMG GT4s are scheduled to be in attendance.  TeamTGM has one that will be shared by Guy Cosmo, the returning Ted Giovanis and newcomer Owen Trinkler.  The team is supposed to run two Mercedes-AMG GT4s full-time in 2018, but they’ve only taken delivery of one so far.  As a result, their second car for the test will be the team’s existing Porsche.  Winward Racing/HTP Motorsport has two Mercedes, while Murillo Racing has one for defending Street Tuner champs Eric Foss and Jeff Mosing.  Finally, DXDT Racing (which ran part-time in Street Tuner) has one entered.

Three new Audi R8 LMS GT4s are entered as well.  The James Sofronas-run GMG Racing is back with two new Audis.  Sofronas himself will drive the No. 14 while Cameron Lawrence will be in the No. 13.  The third Audi is entered by a new team, Carbahn Motorsports.  No drivers are listed.

There are three new BMW M4 GT4s as well.  BimmerWorld Racing’s James Clay and Tyler Cooke have moved up from Street Tuner to drive one of them.  The other two are from Classic BMW, a team with multiple entries in Pirelli World Challenge’s TC class in 2017, in partnership with Vess Energy Group.  Both cars have the same driver lineup led by 2016 Pirelli World Challenge TC champion Toby Grahovec.

In Porsche land, defending champions Rennsport One has acquired a second Cayman GT4 Clubsport MR.  Spencer Pumpelly, who drove the No. 17 Cayman in Street Tuner last season, will test the car.  Defending Grand Sport champion Dillon Machavern will drive the No. 28.  Also, Bodymotion Racing has changed their number from No. 12 to 5.  Stevan McAleer makes the move up to Grand Sport with rookie Joe Robillard.

Aston Martin is represented on the grid by two entries from Automatic Racing.  They are once again guaranteed to be the loudest cars in the series.  There are also three McLarens (C360R’s No. 76 and two entries from the Canadian Motorsport in Action squad) entered.

The only missing manufacturer that competed in 2017 is Chevrolet with their Camaro GT4.R.  That car was run in the series by the now-shuttered Stevenson Motorsports.  While the car is now available for sale to customers for the price of $259,000 plus tax, no one has entered one for the test.

UPDATE: In an entry list update, Stephen Cameron Racing’s No. 19 BMW M4 GT4 shared by Ari Balogh and Greg Liefooghe has withdrawn.  However, the number of entries remains the same with the addition of the second Classic BMW entry.

The new TCR class has only seven teams entered.  Six of them are running the Audi RS 3 LMS Club Sport.  C360R and JDC-Miller MotorSports moved their squads up from Street Tuner.  Murillo Racing added a third team (No. 53) to tackle the new class.  Meanwhile, three new teams are entered.  eEuroparts.com Racing, who participated in the December test, is entered with Lee Carpentier and Kieron O’Rourke.  Another new team, RS Werkes Racing is entered with no drivers listed.  Finally, the only non-Audi team is Rumcastle LLC, which appears to be a small family operation out of Virginia that will run a Volkswagen Golf GTI TCR.  There is very little information available on the team, but one of the listed drivers, Tanner Rumberg, is a former late model racer in the PASS South Super Late Models.

2018 is the last year for the Street Tuner class.  Given the lame duck status, a depressed car count was to be expected.  For the Roar, only five cars are entered in the class, all of which are returning from 2017.

Bodymotion Racing has their Porsche Cayman (re-numbered from No. 31 to 21), while Murillo Racing’s No. 65 Porsche is back as well.  MINI Team JCW has two cars entered (Nos. 37 and 73) entered with a cast of six drivers that have all driven for the team previously.  Finally, BimmerWorld Racing has their No. 81 BMW 328i.  Replacing Balogh and Liefooghe are Nick Galante and Devin Jones.

Unlike in the IMSA WeatherTech SportsCar Championship, attendance at the Roar Before the 24 is not mandatory in order to race in the BMW Endurance Challenge at Daytona.  Expect to see a few more teams, especially in the Street Tuner class, entered for the race.  For instance, many of the teams running Mazda MX-5s (Ex: Freedom Autosport) choose to skip the test.