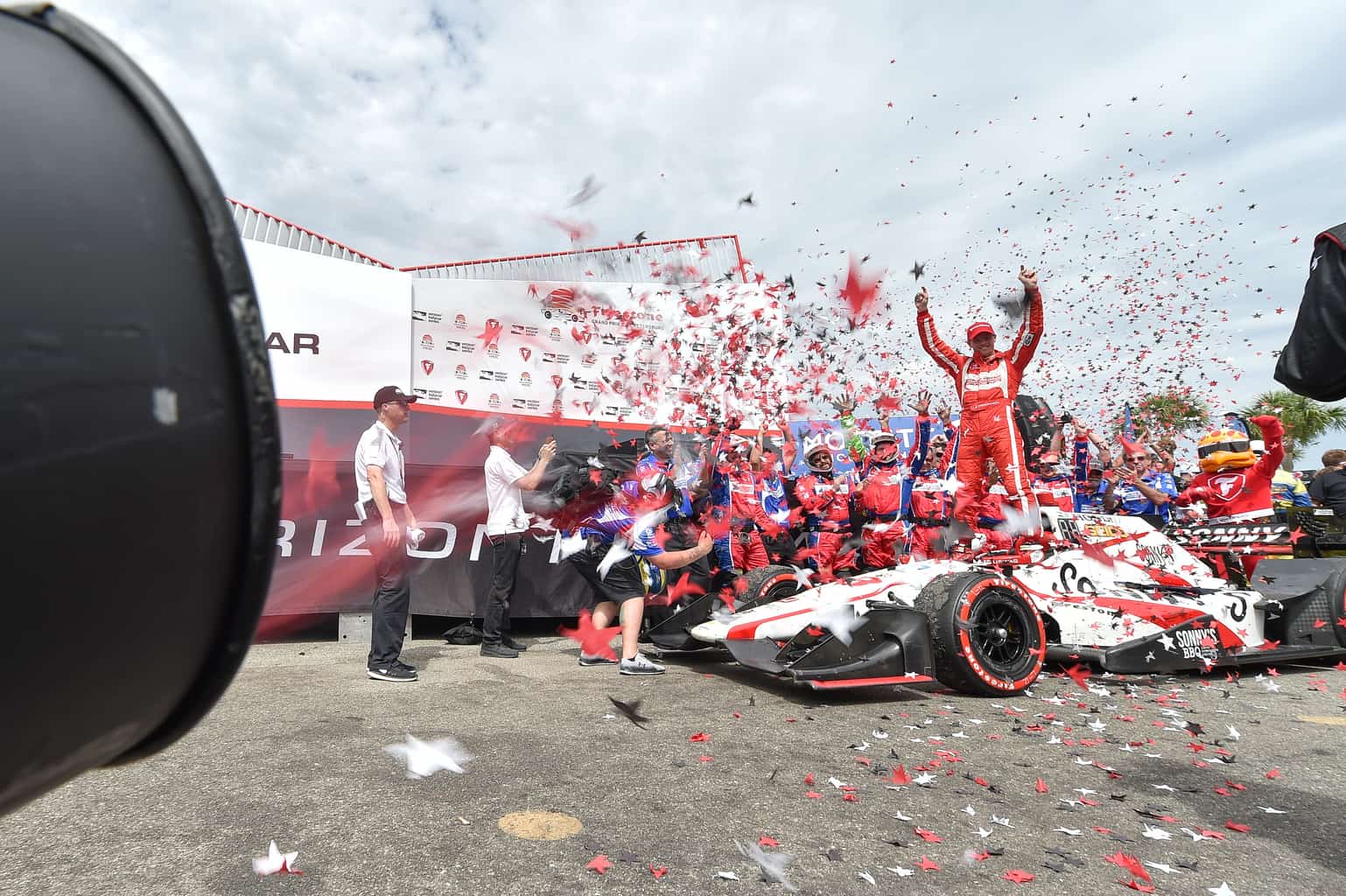 For 2017, the driver signed with Dale Coyne Racing, which he drove for in 2011. The team also brought 2016 Indy Lights champion Ed Jones on board for the season.

Coyne and Bourdais had an unexpectedly great start to 2017. After Bourdais crashed during qualifying at St. Petersburg, he was forced to start the season opener from the back.

But his team prepared for the race with an alternate pit strategy. A four-car accident on lap 1 allowed him to jump from 21st to 14th, and then a yellow on lap 26 forced the leaders to pit. Bourdais stayed out because he had come in a few laps before. From there, he and fellow Frenchman Simon Pagenaud battled for the lead.

Bourdais’ eventual win was the 36th of his career in the series.

A month-and-a-half later, Bourdais’ smooth-sailing season came to a screeching halt at Indianapolis Motor Speedway. During his qualifying run, Bourdais’ No. 18 broke loose in Turn 2. He over-corrected his spin and slammed the wall before flipping over on the backstretch.

Bourdais suffered a broken right hip and multiple fractures in his pelvis. With Bourdais unable to compete in the 101st running of the Indianapolis 500, Coyne hired Australian sports car driver James Davison to race in his usual driver’s place.

I walked out of the hospital today. On to rehab now! pic.twitter.com/bwTOsBNDaD

Davison finished 20th and led two laps in the Indy 500. Jones finished third, giving him his first and only podium in his rookie season.

Formula 1’s Fernando Alonso won the Indy 500 Rookie of the Year honors, but some felt Jones’ result overshadowed Alonso’s performance and failure to finish, so Coyne gave its driver a trophy to express a feeling of pride for the podium in his first running.

Coyne put former F1 driver Esteban Gutierrez in the No. 18 for seven of the eight races after the Indy 500. His first career race on an oval came at Iowa Speedway, where he finished 13th. It was the best result of the Mexican’s seven starts.

The lone event he didn’t compete in during his stint with Coyne was the Rainguard Water Sealers 600 at Texas Motor Speedway. Tristan Vautier raced at the 1.5-mile track and led 15 laps before a multi-car accident relegated him to a 16th-place finish.

Bourdais returned to the No. 18 in late August when the series visited Gateway Motorsports Park, finishing 10th and leading five laps.

September was a quiet month for both Coyne drivers. Jones ended the season with finishes of 13th and 19 at Watkins Glen International and Sonoma Raceway, respectively. Bourdais finished 17th at the Glen and ninth at Sonoma.

Jones finished 14th in the standings while Bourdais ended 21st, recording starts in eight of 17 races.

Bourdais will return for the 2018 campaign, but a second driver has not been finalized. Jones will race with Chip Ganassi Racing for the upcoming season, and there’s no word on whether the team will field an additional Indy 500 entry for Pippa Mann, like it has the last four years.

Extremely honored to be joining @CGRTeams for 2018 driving the #10 @NTTDATAServices car. Can't wait to get going @GanassiChip ! #IndyCar

The team hasn’t discussed downsizing to one car, so it appears it is still searching for a driver to replace Jones.