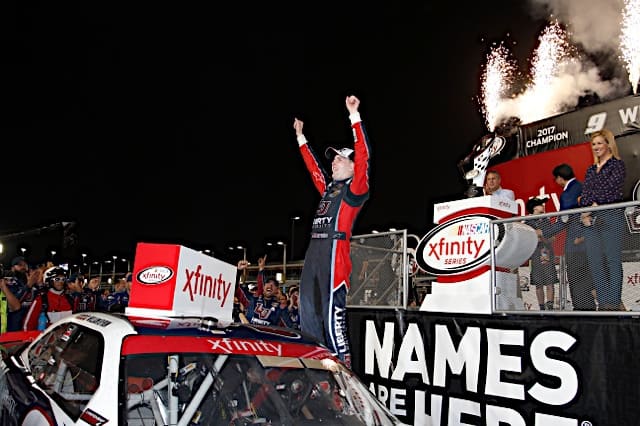 Heading into the 2017 season, the XFINITY Series was stacked with competition with returning veterans, fresh babyfaces entering the next chapter of their career and even Cup drivers making the leap back down to be competitive in the top preliminary division.

Ryan Reed kicked the season off with a bang, picking up his second victory at Daytona. Over the course of the next 32 events, the No. 16 team had just one additional top-five finish at Dover International Speedway in June.

Justin Allgaier made a triumphant return to the Winner’s Circle at Phoenix Raceway in March, leading a race-high 85 circuits. Through the better part of the first three months of the season, the No. 7 car was the quickest of the XFINITY regulars, leading a career-high 157 laps at Richmond Raceway in April.

After the 12th race of the season at Pocono Raceway, Allgaier had become the point leader for the first time in his career. The No. 7 team closed the regular season with its second checkered flag of the season at Chicagoland Speedway, marking Allgaier’s first multi-win season.

At Iowa Speedway in late June, William Byron became the third XFINITY Series driver to post a victory in 2017, one week after finishing runner-up to Denny Hamlin at Michigan International Speedway in a photo finish. Leading 78 laps at Iowa was the most circuits the No. 9 car was out front for in a single race during the campaign.

We did it! So proud of everyone on this team. Came close last week and got it tonight. So thankful for the opportunity

Byron followed up his first career triumph with his second win the following week at Daytona. In late July, the rookie driver edged out Paul Menard to win at the Brickyard, posting three victories in a five-race span.

Following Byron’s hot streak, it was a month until another XFINITY driver entered Victory Lane, but at Road America, Jeremy Clements had the upset of the year. The No. 51 team was the last one to pit and Clements surged through the field to pick up his first career victory. From over 10 seconds back with a handful of laps to go, Clements drove to the lead, which even included a spin coming to the white flag to get around Matt Tifft for the race lead.

When the playoffs came around, 12 drivers had a chance at the XFINITY title. In addition to Reed, Allgaier, Byron and Clements getting in on their victories, Elliott Sadler received 15 playoff points for winning the regular season championship. Daniel Hemric, Cole Custer, Brendan Gaughan, Brennan Poole, Blake Koch, Michael Annett and Matt Tifft were eligible for the championship.

When the postseason began at Kentucky Speedway, it was Tyler Reddick who was victorious. At Dover the following week, Ryan Blaney went to Victory Lane, while Alex Bowman closed the first round of the playoffs with the checkered flag. Gaughan, Koch, Annett and Clements were eliminated from title contention.

Bell kicked off the second round with his first career victory at Kansas Speedway. Erik Jones made Texas Motor Speedway his personal playground, while Custer had to overcome adversity to end the night 13 points behind Poole for the cutoff position heading into Phoenix, the cutoff race to Homestead.

At Phoenix, Byron was victorious with a late two-tire pit strategy and stamped his name to the Championship 4 at Homestead. Sadler and Allgaier were an easy shoe-in for the championship race based on points, making three JR Motorsports cars eligible for the organization’s second championship.

Poole saw his championship hopes burst into flames (literally) after getting caught up in an accident in the opening 25 laps. The No. 48 car ended the day in 38th. Hemric entered Phoenix 18 markers behind the cutoff, but by earning stage points and finishing fifth, he was able to squeak passed Custer by two points for the final slot into the championship race.

Custer dominated Homestead, winning by over a half-lap, leading 182 of 200 circuits. Hemric was eliminated from championship contention after a battery issue forced the No. 21 car down pit road early into the second stage. Hemric finished 34th.

By many, Allgaier was the pre-race favorite, however, he was working with a new crew chief after Jason Burdett was suspended for the championship race due to a lug nut violation at Phoenix. The backup? Seven-time Cup Series winning crew chief Chad Knaus.

During the race, Allgaier could never compete with his two JRM teammates. The No. 7 team finished 12th in the race and third in the championship.

The battle for the championship came down to the wire between Byron and Sadler. With eight laps remaining, the veteran driver made a move to the inside of Preece for the third position but was unable to clear the No. 18 car, ending Sadler’s championship hopes in the outside wall. Byron got by and was able to cruise to his first NASCAR championship, finishing third in the event.

The then 19-year-old driver was able to hold off a pair of veteran racers for the championship before hopping aboard the No. 24 Cup Series car in 2018. Byron ended the season with the most wins by an XFINITY Series driver (four) and leading the third most laps (262).