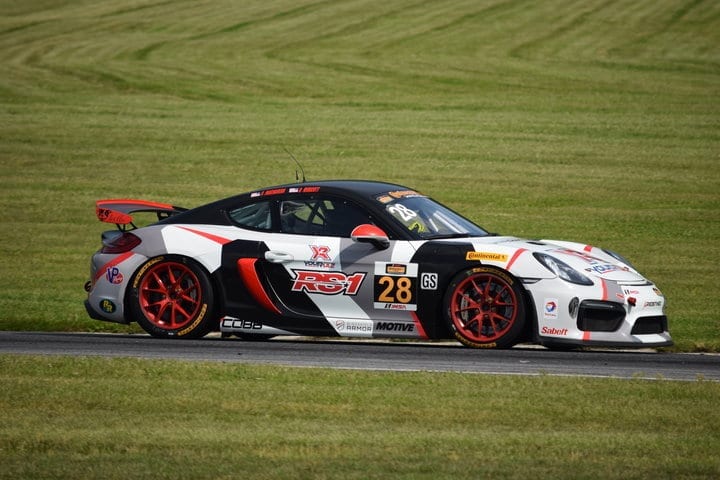 For the IMSA Continental Tire SportsCar Challenge, Session No. 2 was ultimately very similar.  Ford Mustang GT4s dominated the chart for the vast majority of the session.  However, in the final five minutes, defending Grand Sport champion Dillon Machavern put his No. 28 Porsche for Rennsport One on top of the sheet with a lap of 115.247 seconds (111.205 mph).

Machavern’s time, which was the fastest of the day, was two-tenths of a second faster than KohR Motorsports’ Kyle Marcelli in the best of the Mustangs.  Marcelli’s teammate, Jack Roush Jr., was third quickest.  Automatic Racing’s Al Carter was fourth fastest in the No. 99 Aston Martin, while Trent Hindman was fifth in the VOLT Racing Mustang.

In TCR, C360R retained their hold on the top of the charts.  Pierre Kleinubing was once again fastest with a lap of 120.483 seconds (106.372 mph).  The lap, good enough for 25th overall, was nearly three-tenths of a second slower than what Kleinubing managed in the morning.

Kleinubing’s lap was nearly two-thirds of a second faster than JDC-Miller MotorSports’ Stephen Simpson in a similar Audi RS 3 LMS Club Sport.  Rodrigo Sales in the No. 74 Audi for C360R was another seven-hundredths further back in third.

Street Tuner saw Mat Pombo put MINI JCW Team’s No. 37 back on top with a lap of 125.499 seconds (102.120 mph), almost one-tenth of a second slower than what Derek Jones managed in the morning.  The lap, good for 30th overall, was nearly 1.4 seconds faster than BimmerWorld Racing’s Nick Galante.  Mark Pombo was third quickest in the No. 73 MINI.

Three teams did not get out on track at all on Friday.  Murillo Racing’s No. 56 Mercedes for 2017 Street Tuner champion Eric Foss and Jeff Mosing were one of the three.  The CarBahn Motorsports Audi for Mark Siegal and Paul Westphal also didn’t make it out on track.  Finally, the RS Werkes Racing Audi RS 3 LMS Club Sport didn’t make it on track at all.  66-year old Don Istook, who raced an Audi S4 in the Grand-Am Cup (present-day CTSC) in 2002 and 2003, along with spot starts in Rolex Sports Car Series races with short fields, is the only listed driver.

Results of IMSA Continental Tire SportsCar Challenge Roar Before the 24 Session No. 2

Continental Tire SportsCar Challenge teams have two sessions scheduled for Saturday.  The first session is scheduled to begin at 9:30 a.m. and will last for one hour.