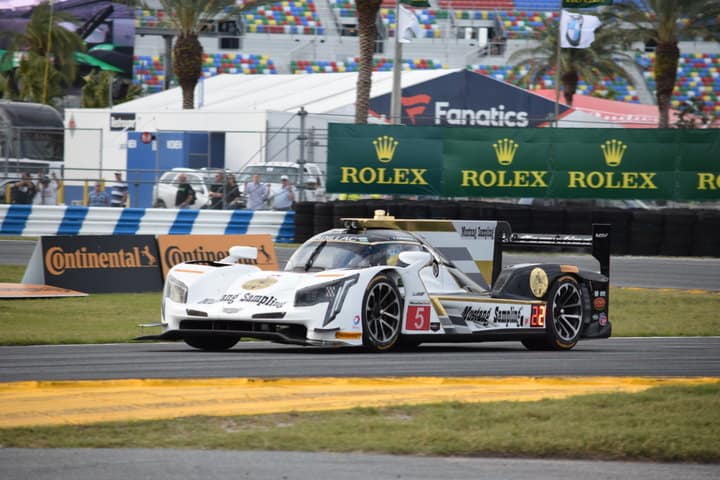 Last year, the Cadillac DPi-V.R.s were the class of the field in Daytona.  The 2018 Roar Before the 24 started out in a similar fashion.  Action Express Racing’s Filipe Albuquerque was fastest overall in the first session with a lap of 97.266 seconds (131.762 mph).  Pace-wise, Albuquerque’s lap was nearly three-eights of a second slower than the time that teammate Joao Barbosa turned to win the pole for last year’s Rolex 24 at Daytona.

Albuquerque’s lap was a quarter of a second faster than Wayne Taylor Racing’s Renger van der Zande.  Spirit of Daytona Racing’s Tristan Vautier was third quickest, followed by Felipe Nasr in a Cadillac 1-2-3-4.  The four Cadillacs were also the only teams to turn in laps under 98 seconds.

CORE autosport’s Colin Braun was the fastest driver in a Global LMP2 car in fifth.  Braun’s lap of 98.041 seconds (130.721 mph) was nearly eight-tenths of a second slower than Albuquerque.

Other notables included the No. 23 Ligier JS P217-Gibson for United Autosports.  Fernando Alonso is part of the driving lineup and took a couple of laps towards the end of the session.  Teammate Lando Norris put the car sixth on the timesheet.  Juan Pablo Montoya was ninth quickest in the No. 6 Acura ARX-05 for Acura Team Penske.  Montoya’s lap of 98.791 seconds (129.728 mph) is the fastest lap for a non-Cadillac DPi entry.

None of the Riley-based entries turned in laps during the session.  That means that both of the Mazda Team Joest RT24-Ps, along with BAR1 Motorsports’ Riley Mk. 30-Gibson spent the 90 minute session in the garage.

In GT Le Mans, Ford Chip Ganassi Racing IMSA’s Richard Westbrook was fastest in class with a lap of 104.095 seconds (123.118 mph).  The time was roughly six-tenths of a second off of the GTLM class pole last year.

Westbrook’s lap was three-tenths of a second faster than teammate Dirk Müller in the No. 66 Ford.  Alessandro Pier Guidi, who is serving as the sole driver of the No. 62 Ferrari this weekend, was third quickest.  Porsche GT Team’s two entries rounded out the top five with Laurens Vanthoor fourth in the No. 912 over Patrick Pilet in the No. 911.

BMW Team RLL’s No. 24 BMW M8 GTE is the only car in the GT Le Mans to not set a time during the session.  The top seven cars in the class were separated by less than nine-tenths of a second.

In GT Daytona, GRT Grasser Racing Team’s Rolf Ineichen was fastest in his Lamborghini with a lap of 107.104 seconds (119.659 mph).  This lap was a mere five-thousandths of a second slower than the class pole time set by Pier Guidi for Spirit of Race last year.

Ineichen’s lap was just over a quarter of a second faster than Porsche factory driver Sven Müller in the Manthey Racing Porsche.  Max van Splunteren was third quickest in the No. 19 GRT Lamborghini, followed by Montaplast by Land-Motorsport’s Kelvin van der Linde.  Park Place Motorsports’ Jörg Bergmeister rounded out the top five.

Results of IMSA WeatherTech SportsCar Championship Roar Before the 24 Session No. 1

WeatherTech SportsCar Championship teams have one more session Friday afternoon that starts at 3:30 p.m.  It will be a two-hour session.